‘Outlander’: Brianna ‘Soldiers On’ Into the Past for ‘Down the Rabbit Hole’ (RECAP)

[Warning: The below contains MAJOR spoilers for Season 4, Episode 7 of Outlander, “Down the Rabbit Hole.”]

The title for Outlander‘s latest episode is most fitting as fans truly followed Brianna (Sophie Skelton) and Roger (Richard Rankin) “Down the Rabbit Hole.”

Eighteenth-century Scotland has received its latest transplants as Bree and Roger traveled through the standing stones at Craigh Na Dun and this week’s installment gave viewers a glimpse at their individual journeys. Below, we’re breaking down every jaw-dropping moment — from the surprising return of fan favorites to developments in Roger and Bree’s personal histories.

Beware of major spoilers ahead because we’re not holding back on a single juicy detail about this latest adventure through time. 'Outlander': The Ghosts of Jamie's Past Visit Fraser's Ridge in 'Blood of My Blood' (RECAP)

What happens when Lord John Grey comes to North Carolina?

We begin with Brianna, who has traveled through the stones. Having packed a peanut butter and jelly sandwich and some matches, Jamie (Sam Heughan) and Claire’s (Caitriona Balfe) daughter seems fairly prepared for her initial entrance, but over-excitement gets the better of Bree as she trips down a hill on her way to finding port.

The move lands her in hot water as her ankle becomes inflamed, but she attempts to power through the pain. She eventually catches sight of civilization but passes out before she can reach it. During that time she has a brief flashback of herself as a child, asleep in the back of a car. Suddenly, a familiar voice sounds and Frank (Tobias Menzies) appears, who tells her she’s home and safe. It is in waking from this memory that Bree discovers she’s been brought to an unfamiliar place, tucked into a bed. Much to our shock, the woman behind Bree’s salvation is none other than Jamie’s ex-wife, the Claire-loathing Laoghaire (Nell Hudson). This is unbeknownst to both of them, and Laoghaire is warm to her guest as Brianna is served food in bed. Bree is grateful for the hospitality and explains her plan to find her parents in America. With this, her American accent is questioned by Laoghaire as Bree had said she’s from England.

That evening, Bree overhears Laoghaire in an argument with Ian (Steven Cree) about the money she’s owed by Jamie, though no name is mentioned, leaving Bree in the dark. Laoghaire denies Ian from lending her anything to make up for the late funds, as she’s too prideful. After the exchange the next morning, Bree sits down with Loaghaire’s daughter Joan (Layla Burns) and they connect over growing up in households where one parent didn’t share love for the other. In many ways, Claire was to Frank what Jamie was to Laoghaire. 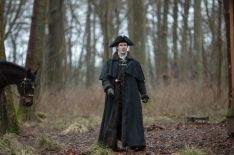 'I think he's a very compelling character,' says the actor.

This realization is only magnified with another flashback of Bree showing up to Frank’s Harvard office. On his desk is a copy of the obituary for Claire and Jamie who supposedly died in a fire – the reason for her journey now. Did this discovery put Frank over the edge? When Brianna asks what’s troubling him, Frank doesn’t say anything because doing so would reveal the secret of Brianna’s parents.

In a return to Brianna’s present in the 1700s, Laoghaire is asked by her guest about the situation with her ex. She reveals that a woman bewitched him and stole him away, and Bree still isn’t aware that she’s talking about her parents. As Bree continues to recover from her ankle injury, she helps around the house and in casual conversation, hears Laoghaire bring up Lallybroch, Jamie’s family’s estate. When Brianna shares that her family is from the same place, Laoghaire asks if she might know the girl’s parents and her eyes nearly pop out of her head when she hears Claire is Bree’s mother. With this, Laoghaire’s attitude darkens and she began to twist a tale of rumors that Bree’s father never wanted children in an attempt to scare her off. Still, Bree explains that her parents are in danger, though she doesn’t know how to explain how she knows this. This information forces the sneaky woman into telling the truth, as a dead Jamie means no more alimony. Bree realizes she’s no longer welcome and tries to leave as Laoghaire goes into a fit and locks the girl in a room. She promises to have her arrested for witchcraft like she did to Claire previously.

Meanwhile, Bree’s flashbacks continue to piece the puzzle of her past together. We see Frank pull up to a curb where his daughter is walking with friends. He asks her to get in, and when she complies, he reveals he’s divorcing Claire and pushes for her to join him in England as he’s accepted an offer to teach at Cambridge. A shocked Bree doesn’t understand that her parents are miserable. When she gets out of the car, he tells her he loves her, but she doesn’t say it back, making the next scene sting even more.

As Bree stands over her father’s grave in another flashback, she laments not staying in the car with her father — perhaps he wouldn’t have gotten into a fatal car accident if she’d been with him. But she does promise to “soldier on,” calling him her “hero.” Just when hope seems to have disappeared, Joan unlocks Bree’s door and helps her get to Lallybroch where she introduces herself as Jamie and Claire’s daughter and re-meets Ian, her uncle.

There, Ian helps get Bree the things she needs to travel overseas — he has some of her mother’s clothes packed and funds secured for the journey, as he states that they’re family. Just as she heads for the docks, Bree is approached by a shaky man who asks if she’ll take on his daughter as a servant. When Bree understands that it’s a matter of life and death, she agrees, and she heads onboard with her new companion by her side. Bree takes a final look at the docks and sees a vision of Frank who nods in approval at her journey ahead – the confirmation that she needed. As for Roger, he’s on a separate journey as he bids Fiona (Iona Claire) farewell at the standing stones, and aims for port like Bree. There, he tries to board the first possible ship to the colonies captained by none other than Stephen Bonnet (Ed Speleers). At first he is denied passage, but after a coin flip, he’s granted a position in the crew by the sadistic seaman.

On board, Roger learns that Bonnet isn’t one to be messed with when the captain decides to throw a girl who is infected with smallpox overboard, Roger protests and tries to save her but is too late. The event sets him into action as he tries to prevent further death by hiding a young woman and her infant as inspections by the crew for further spread of the disease ensues. In the process, he learns that the woman and child are MacKenzies, making them his likely relatives and their survival crucial. But Roger is soon caught by Bonnet while he’s dropping off food to the woman. The captain pulls out his coin for another flip – this time, Roger is in danger but he’s spared. And even though he’s on a lucky streak, we have a feeling that could wear out soon, especially with Bonnet. Hopefully there will be some luck when it comes to finding Bree because we have a feeling they’ll need each other in this strange new world.

Below we’re breaking down some key thoughts from the episode and what to keep in mind for next week.

Down the Rabbit Hole