[Warning: The below contains MAJOR spoilers for Season 3, Episode 3 of This Is Us, “Katie Girls”]

Another week of This Is Us means a deeper dive into the lives of the Pearson family and “Katie Girls” didn’t disappoint.

From difficult memories and realizations to big life changes, it seems like a never-ending onslaught for this beloved TV family, but it isn’t all sad. We’re breaking down the key moments from the latest episode, but beware of spoilers ahead.

The show's EPs tease big changes coming for the Big Three this season.

Understandably, the episode focuses on Kate (Chrissy Metz) as she prepares and undergoes egg retrieval surgery. But before viewers are brought to that moment, they are shown the aftermath of Randall’s (Sterling K. Brown) reaction to Kate’s comment last episode about carrying on a piece of Jack. The siblings get in a fight over her decision to undergo IVF because Randall feels like Kate would rather risk her life than adopt.

Kate begins to panic about her family’s behavior towards her, telling Randall she feels like everyone thinks she’s going to die in surgery. The two are unfortunately unable to resolve their issue before she goes under. Now in a sedated state, Kate reunites with her teenage self (Hannah Zeile) and kid self (Mackenzie Hancsicsak) — but these Katie girls aren’t alone. Jack (Milo Ventimiglia) is there as well ready to embrace his now-grown daughter. The procedure was successful — with 8 eggs retrieved — but Kate doesn’t wake up from her anesthesia right away and fans are brought back to that halfway happy place she’s inhabiting. Teen Kate advises that she stay because that’s where Jack is, pointing out how nothing ever works out for them. But Kate tells her teen self that this time is going to be different — she will be a mom.

With that, Kate reenters reality where Toby (Chris Sullivan) and Randall are waiting at her bedside. Randall apologizes for his harsh words, and Kate reassures her brother that he has so much of Jack in him. His trip out to Los Angeles for her surgery is what Kate calls a total “dad move.”

In other “Big 3” news, following his movie premiere, Kevin has one last media commitment to fulfill and offers for Zoe (Melanie Liburd) to tag along. At first she hesitates, but when he reveals that the interview is with NPR’s Terry Gross, Zoe is all in. During that interview, Kevin’s asked whether his father’s time in Vietnam influenced his performance in the movie, and Kevin can’t answer.

He realizes that he never asked his father about his time in the service, even remembering a moment from his past when Jack offered to answer questions and he passed. But Kevin’s going to fix this, and based on what fans know of Kevin’s timeline, a trip to Vietnam may help this quest. We wrap the episode with him getting in touch with some of Jack’s old military pals. As for Randall, outside of worrying about Kate (and flying to be by her side), he’s also wrapped up in the work Councilman Brown (Rob Morgan) is failing to complete. He wants a safer Philadelphia for his friends like Chi Chi (Yetide Badaki) and her daughter Sky (Drew Olivia Tillman).

While in L.A. visiting his sister, he receives a call that Sky has been badly hurt, roughed up on the light-less streets, and he’s not having it. He returns home to Beth (Susan Kelechi Watson), proclaiming to do better for the neighborhood than Councilman Brown by running in opposition of the politican. All the while, he’s nearly oblivious to Beth’s demeanor until she reveals that she’s been let go from her job.

We end the episode on a happier note with Jack and Rebecca’s (Mandy Moore) early romance. Fans learn more about the man on her doorstep — his name is Alan (Hunter Parrish) and they dated for three years — starting in high school — before breaking things off. He proclaims his love for her and suggests that they move to New York City, and at first Rebecca goes with it, despite her desire to move to Los Angeles.

Celebrating their reunion, Rebecca and Alan share dinner with his parents, including science professor mother (Jane Kaczmarek). When Rebecca leaves the merriment to grab some champagne at a nearby store, she bumps into Jack who is helping his mother find a coffee cake to bring to her friend’s house. This is just moments after Jack made his mother leave his abusive father once and for all. The pair exchange pleasantries and even though it’s a bit awkward, their connection is palpable. So when Rebecca returns to Alan’s, she asks his mother’s advice: Should she go to New York with her old flame or follow up on Jack, a guy she barely knows but “has a feeling” about? Ultimately, the mother tells her to follow her gut, and Rebecca tracks down her future husband.

A surprised Jack answers the door and invites her in, pausing their conversation only to clean up the dishes — a practice she never saw her father do as a child. It’s clear that Rebecca is seeing Jack for the person he is, and when she asks him to drive with her to Los Angeles, he gives the answer any fans would expect — yes.

The actress teases her character has quite the journey this season.

Some more memorable moments from “Katie Girl” to keep in mind: 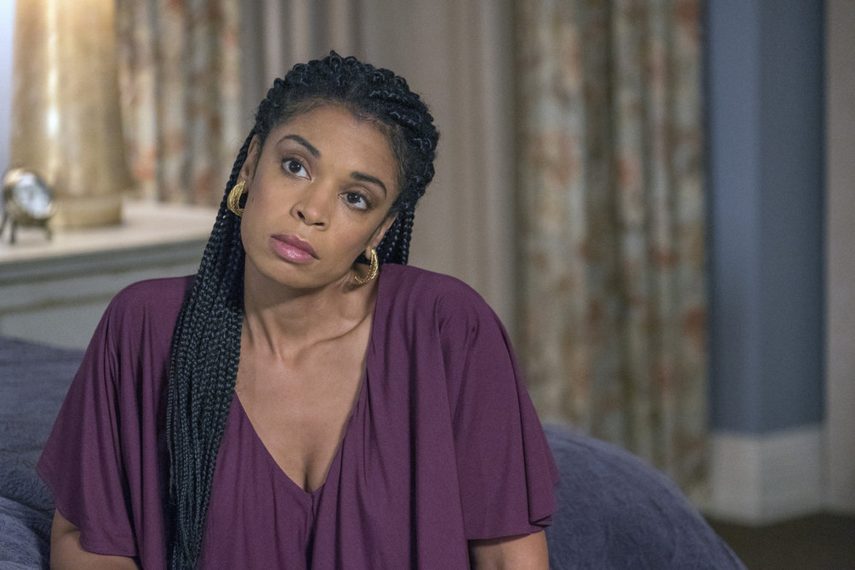 Thankfully This Is Us will return in one week to either ease our concern or break our hearts, whichever it is we’ll have tissues nearby.