[Warning: The below contains MAJOR spoilers for the Season 4 finale of Fear the Walking Dead, “… I Lose Myself.”]

After a season of talking about leaving Texas and encouraging his friends to come with him, Morgan made a shocking move on Sunday night: he stayed put.

The stick-wielding leader decided not go to back to the place he once called home, the Alexandria Safe Zone. Though surprising, Morgan’s choice was just one twist in a super-sized Season 4 finale of Fear the Walking Dead that left its characters in a place of relative security, with a brand-new and much-needed mission and sense of optimism.

Showrunners Andrew Chambliss and Ian Goldberg broke down why Morgan opted not to trek back home, how the show will continue to honor the characters it lost in Season 4, the decision to do away with that gray filter and what’s to come when Fear returns in 2019.

Why did you guys decide Morgan needed to stay in Texas, rather than going back to Alexandria?

Chambliss: Morgan’s decision to stay in Texas is really rooted in his experience that he has had with all our characters throughout the season and crystallized with his final experience with Martha in this episode. He says that Martha went down the twisted path she did because there was a time she needed help, and no one stopped to help her. And it’s learning that backstory for Martha and seeing the similarities between himself and Martha and that Martha is kind of a cautionary tale — had he not met Eastman back on The Walking Dead, had he not met John Dorie in episode 4×01 — that makes Morgan realize going back to Alexandria to be part of a community that was doing pretty well the last time he saw it might actually be a selfish decision.

Morgan is conscious of the fact that there are many people out there who needed help. And all our other characters rally around that idea, because they in many ways have been helped by each other…Alicia says it’ll allow her to keep doing what her mom was doing. For Luciana, it’ll allow her to do what Clayton was doing. Even for Al, it will allow her to help these people who she was interviewing who at one time she only cared about their stories, but now she perhaps wants to become part of that story. 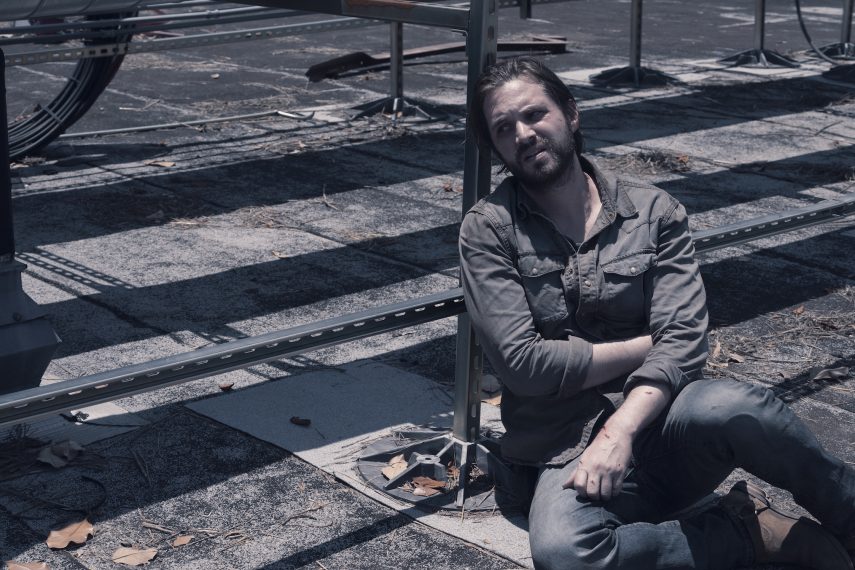 How did you decide to make beer such an important aspect of the back half of the season?

Goldberg: We love beer! It started with Jim, obviously. Jim is a very unique character, and we love his passion for beer. He has that really good speech in 4×11 where he goes through all the historical uses for beer; how beer has been at the center of civilization for a long time. But we also found it interesting that this desire to spread beer to the masses in the apocalypse was a selfish motivation. So he was a very selfish character when we met him, but by the time he made his ultimate sacrifice he was a very changed person. And so the legacy of his beer was something we thought could go from a selfish motivation to something very emotional, and we got very excited when we found Jim’s speech about beer being the staff of life came true when our group found themselves poisoned with antifreeze, and his beer was actually the antidote. It was the staff of life, it was the thing that saved all their lives. Beer brought everyone together. It felt like a pretty powerful legacy for a one-time very selfish character. Absolutely. Is there a chance that any of the departed cast members or characters we’ve lost this season might come back next season, either in flashbacks or in dream sequences?

Chambliss: I think the way that the departed characters will live on is really through the mission we’ve set up at the end of the finale. The belief that Madison died to protect is the thing that will be at the core of what our group is doing, and it will be something that Alicia will really fight to keep alive. In many ways Madison will live on through Alicia, and through what Alicia brings to the group’s mission.

On the subject of Madison and Alicia, I was wondering if this was intentional or a happy coincidence. I couldn’t help noticing that the outfit Alicia was wearing in the finale (most notably her black pinstriped shirt) was very similar to what Madison was wearing when they first arrived at the stadium. Was that a deliberate choice, or did it just happen that way?

Goldberg: It was intentional. I think you see, in the back half of the season, Alicia finding ways to carry on Madison’s legacy. We see her struggling in 4×10 with what she’s going to do about Charlie, how she’s going to keep her mother’s spirit alive in her. It’s ultimately the thing that holds her back from her darkest impulses, and that’s one example of keeping Madison’s legacy alive. Another is in the finale, when she’s having a beer with Strand. Granted, they’re having those beers to get rid of antifreeze poisoning, but we saw earlier in the season Strand and Madison sharing a drink at the stadium — it was very much a part of their relationship going all the way back through previous seasons. When Strand says, “There was a time I thought I didn’t have anyone to drink with anymore,” that was a moment between him and Alicia where Alicia, again, sort of takes the baton and carries on her mother’s legacy…the final example is when they’re at Polar Bear’s river mill at the end, with Alicia telling Morgan they need to build this place up and help people like her mom did. So Alicia is carrying that torch, and is going to continue to do so into Season 5. Would Fear ever do another time jump or another major setting change, like The Walking Dead is doing this season?

Chambliss: Season 5 is very much going to pick up with the story that we set up at the end of Season 4. That being said, going forward in the future, we never want to rule anything out. It’s always a possibility, but our focus is on the characters who we see drive out in that convoy with a new mission to seek their own redemption by helping other people. We want to explore how that mission’s going to play out, and whether or not that will actually give our characters the redemption they’re seeking.

Was there anything you guys had to cut out in the finale — or any of the episodes in 4B — that you wish you could have left in?

Chambliss: Going through my head right now, in 4×16 we didn’t cut any scenes wholesale. There may have been a few lines here or there, to tighten things up, but that episode turned out pretty much as we conceived it. Even going back through 4B, I don’t think there’s anything that we left on the cutting room floor that we wished we didn’t have to. AMC is great about letting us deliver the episodes in what we think is the best form, and sometimes that means getting a little more time so we don’t have to make those hard decisions. About the end of the episode — I noticed that it looked like that gray filter and muted colors were getting brighter again. Can you talk about how you made the decision to lift that at the end?

Chambliss: Our whole thinking about the end of the episode was really wanting to end in a very hopeful place. We didn’t want to end in a cliffhanger where we wonder whether or not a character is going to live or die, we’ve seen that before. Really, we wanted to end in a positive place because this season, for us, was about these characters journeying from a very dark place to a place of hope. So everything about that final sequence — from the production design, the cinematography, the score — was really about conveying a growing sense of hope as our characters are going out on this new mission. They don’t know what it’s going to hold for them, they don’t know whether it’ll be successful. But they believe in it, they believe it’ll bring good to the world, they believe it will help them make the world a better place. So across the board, that sequence was designed to feel much brighter and have a real sense of optimism to it.

And will that brightness stay, then, in Season 5?

Goldberg: It absolutely will. We started this season, and we’d said many times we want Fear to be a show about hope. And that will continue into Season 5. It doesn’t mean our characters won’t face obstacles, won’t butt up against challenges of humans, walkers, all different types of adversaries and obstacles in this world that people can encounter. But they now have a very strong drive — they have a shared mission of keeping hope alive and helping other people, and that is who they will continue to be.