It’s finally happening! The long-awaited crossover between AMC’s The Walking Dead and Fear the Walking Dead is coming and, during tonight’s Talking Dead episode, the new trailer was dropped.

We know Lennie James’s Morgan is the character crossing over to Fear, and we know there are other new cast members for the series’ fourth season, including Maggie Grace, Garret Dillahunt and Jenna Elfman. The rest of the details have been closely guarded but anticipation is high nonetheless, especially as we’ve seen Morgan get increasingly violent by the world around all the survivors. 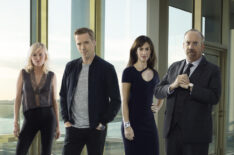 In addition to the trailer, AMC also released key art for the new Fear season.

Check out the trailer below and mark your calendars for April 15 at 10/9c for the season premiere of Fear the Walking Dead.