Fire up the ice cream truck! 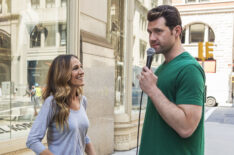 The network confirmed the June 6 series premiere of Condor—their take on Three Days of The Condor—starring Mira Sorvino, Max Irons, and Brendan Fraser. They also announced the March 20 return of polygamy dramedy You, Me, Her for Season 3, and the Season 2 premiere of diamond-business thriller Ice on March 28.

On the unscripted front, Audience has Refuge, an in-depth look at refugee groups around the world, and their soccer doc, The Pitch. Both docuseries will consist of 6 half-hour episodes kicking off on February 14.