Chances are Scott Caan has, at one point, been in your watch queue — especially considering he spent 10 years on Hawaii Five-0. But what’s the star of the new Fox drama, Alert: Missing Persons Unit, himself watching these days?

TV Insider took the opportunity to ask him when he stopped by to preview his new show, which, while it is a procedural, he said “didn’t read as” one when he read it. “I know I’ve been tricked,” he laughed. “It was really about the characters. It was really about this relationship between Dania [Ramirez] and my characters and our missing son and her new fiancé and the people that she works with.”

And so it’s fitting that the shows he’s watching are also character-driven: The White Lotus, Mr Inbetween, and The Bear (which he has in common with 9-1-1‘s Oliver Stark).

“I’m a big character arc guy and I think all those characters are insane and interesting and screwed up in the ways that interesting people are to watch,” Caan explains of HBO anthology series The White Lotus. “I think [series creator] Mike White is a genius at digging into the human psyche and issues and problems, whether it be rich people or poor people or working class or whatever. He has a real way of making dialogue. It’s like watching a play. He’s figured out a way to make theater really interesting and cinematic.” 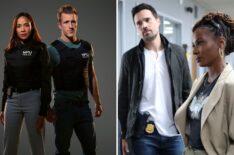 With the Hulu dramedy Mr Inbetween, starring Scott Ryan, Caan found himself doing something he doesn’t usually do. “A writer friend of mine who I was working with said ‘just watch the first episode,’ and I watched the first episode and I couldn’t stop,” he shares. “I’m not a binge guy, but I watched three seasons of the show all the way from beginning to end. It took me like a week. … It’s just basically about a hitman who has an amazing relationship with his brother and his daughter. It’s kind of like my favorite thing to do when you take these heavy antiheroes and get into their life.”

Watch the full video above for more from Caan about his picks.

Mr Inbetween where to stream