Ghosts is finally back after a brief hiatus the past few weeks, and it certainly delivered some signature comedy and heart when it comes to everyone’s favorite Revolutionary spirit Isaac (Brandon Scott Jones).

While much of the episode’s story focused on Sam (Rose McIver) and Jay’s (Utkarsh Ambudkar) efforts to please a member of the press with their whiskey tasting, while also distracting an inspector who visits to grant them a liquor license, Isaac and Trevor (Asher Grodman) teach the ghosts about fraternities. Flashing back to years earlier in Isaac’s past, viewers understand that some of the things he told his fellow spirits was false, he was never part of the Freemasons and barely fit in with the likes of historical figures like Benjamin Franklin.

Below, Jones opens up about delving deeper into Isaac’s insecurities, finding fraternity with his found family, and what’s next for his character heading into the highly-anticipated holiday episodes. We saw a new side of Isaac’s past in this episode, whether it was his hairstyle or awkwardness around others, what was it like getting to dig further into his backstory?

Brandon Scott Jones: It was really fun. I think what was interesting is when we got the script was taking place a little bit earlier in his life and I felt like there was an opportunity to tell as much about him as you could. I’ve always felt he’s a guy that was perpetually trying to fit in with a cool club that he didn’t necessarily inherently belong to. Whether he knew he didn’t belong or he was in denial that he didn’t belong, I saw that [flashback] and thought it would be fun to show a little bit of change through his hair that he wanted to be a part of this cool club and they all had the long hair with the ponytail. One could make the inference that he changed himself to be more like the people he wanted to be like. And so that was really fun, especially when you, when you wear the same thing every day.

Isaac goes toe-to-toe with Trevor when it comes to fraternities. What was it like exploring that vulnerability in Issac’s story?

In past episodes, his vulnerability has been about his identity and who he really is. And this feels a little bit more like his legacy and that he wasn’t a part of that piece of history that he really wanted to be or always told these people he was a part of. [He’s] been holding onto this for so so long. It was really fun to play that opposite Trevor and to see what the concept of a fraternity is back then versus what it has become, right? And to see how those two things are at odds. From Trevor’s perspective, it was all about partying and having a great time and just being with your bros. Whereas Isaac really imagined it and built it up to be this very intellectual club, like a meeting of the minds type of thing. He’s obviously built it up cause he doesn’t really know what it was like, but I think he had spent so long pretending to be a part of it and wanting to be a part of it that he has this overly enthusiastic approach to what this thing is going to be. 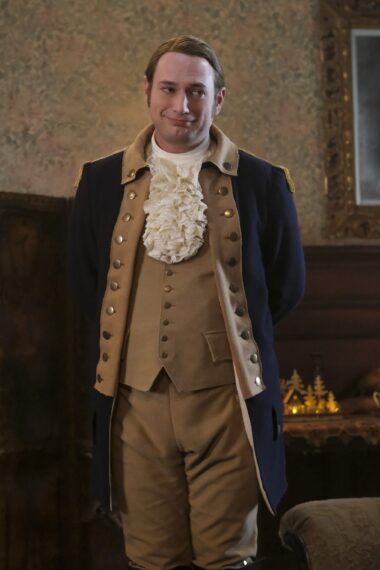 Benjamin Franklin makes an appearance. Of all the historical figures you could include, why was it so imperative to feature him?

This is probably the worst way to say it. It’s like you were sort of had a choice between doing a musical in 1996 that was either Rent or something else and you chose something else and Rent went on to live forever. [Isaac was this guy that] never understood why he didn’t fit in. And I think Ben Franklin is such a recognizable figure that it’s almost like he represents the larger era. And I also think Ben Franklin is sort of classically known as a womanizer, sort of like that classic, problematic, pompous man. And Isaac isn’t that at heart but thought he had to be.

Yes, the difference between them is even more apparent when Ben Franklin’s commenting on the tavern server’s appearance.

What does it mean to Isaac to know he’s found this fraternity in the afterlife with his fellow ghosts?

It’s nice. I think he’s surprised that Trevor is the one that’s illuminated that for him a little bit. And I think it’s the sort of nice reminder that you can sit there and have a fraternity, [which] is essentially a chosen family and or a found family. And I think to realize that it’s not necessarily how you imagined it when you’re in a fraternity, sorority, or any type of secret society, it means to have people around you that recognize [who you are]. I think Isaac’s tried to separate himself as something bigger, but then [he realizes] he’s just one of these other ghosts. It’s a really good lesson for him to learn at this point in his life or death. Considering the growth Isaac has had over the series, what can you say about the experiences he’ll have heading into the holiday special?

His growth last season was a lot about him sort of admitting that he’s pretended to be someone that he isn’t. And this season is now a little bit more about acceptance. Once you’ve admitted it, it’s only really true if active. And I think for him, with his relationship with Nigel (John Hartman), I think he’s been very reserved and moving at a very slow pace to try and hold onto a remnant of his past life. And as the season continues, he’s gonna slowly open up more and release that valve and realize that indulging certain things that he holds a lot of guilt around doesn’t necessarily have to be a bad thing.