It’s just one piece of bad news after another for 51 in the Chicago Fire fall finale.

First, Carver (Jake Lockett) finds out he’s going to be facing internal affairs with questions after an incident on a call; a city worker wasn’t going to let him handle the controls of a bridge during a rescue. Then, it turns out the person from internal affairs is none other than Emma (Caitlin Carver), the paramedic who tried to oust Violet (Hanako Greensmith) to take her spot at 51 last season!

And in the final moments of the episode, Kidd (Miranda Rae Mayo) and Carver enter a house to help bomb squad with a live grenade that has yet to detonate in the leg of none other than Detective Pryma (Troy Winbush). Soon after the grenade has been removed, however, it arms, and Kidd, Carver, and Pryma can’t really do much for cover.

With that, we’ll have to wait until January to see what happens next. Fortunately, TV Insider spoke with showrunners Derek Haas and Andrea Newman to get some scoop.

That ending was wild. What can you say about what’s next after that cliffhanger? Is the winter premiere picking up right where this episode left off?

Derek Haas: Yes, we’re starting one second later and back outside with Severide [Taylor Kinney] as he sees what happened with this explosion. Firefighters don’t run away when bad things happen. They run towards it. And this is Severide — even though there could be other live explosives still inside the building, he just runs straight into the fog of war and that’s where we pick up and it’s gonna be harrowing.

Kidd seems to be in the worst position. I’m thinking back to when she was in the hospital with her lung…

Haas: Yeah. This is not gonna be good.

Andrea Newman: And it’s gonna have long term impact on Severide as well.

Talk about the decision to bring Emma back like you did. Haas: [Laughs] That is one of those things where over the history of this show, just when you thought we had dispatched one of our bad guys, they end up returning as we did in the long tradition of Hope [Eloise Mumford] and Gorsch [Steven Boyer]. We love Caitlin Carver and we just thought she’s pretty amazing at playing this part because she’s the villain, but in her head, she’s the hero. And so it’s really fun to watch her interact [with 51]. This is not ending anytime soon. She’s in a position now where she can do some damage to anybody who decides to run against her, and she’s going to wield that power.

Newman: But at the end of the day, what’s fun about Emma is all she really wants is to be a part of 51. So her goals are mixed, and she considers herself in some ways part of the family and then she finds herself at odds with it time and time again.

For whom will she be the biggest problem? 51 as a whole or Violet again specifically?

Haas: Violet is going to poke the bear, which she is advised not to, but sometimes —

Newman: She can’t help herself. What’s fun is there’s surprising repercussions to that. Who it ends up falling on the hardest is a surprise.

You can’t really blame Violet though, because she just lost Hawkins (Jimmy Nicholas), and this has to bring that up.

Haas: Exactly. This is a woman who tried to blackmail the guy who died almost immediately after that. So her feelings are not controllable.

Newman: That’s a passion of his and he’s really good at it, so we’ll see some of that. And we’ll see him dealing with OFI in an entirely new way coming up. He’s got his hands full with a case coming up that’s not exactly your typical arson case.

Newman: I hope so. I love her.

I was going to ask that. I also want to see more of Kidd and Seager together.

Carver seems to be fitting in better at 51. He bonded a bit with Gallo. He and Kidd are getting along. So assuming he survives, is that gonna continue or change?

Haas: That’s way too big of an assumption. There are a lot of questions. We — no, I’m not even gonna say it. This show’s mean. It was always so sweet when it was just me showrunning, but then when Andrea came on the show got really mean. 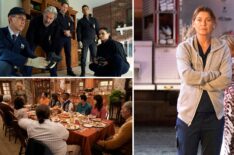 Any other returning characters coming up?

Newman: There will be some. We love bringing back people who have either been villains or family members and people who’ve been, been thorns in our side. We have a couple of those coming up.

Haas: Cindy’s [Robyn Coffin] coming. We actually have a surprising Med character that you haven’t seen on our show very often is coming.

Newman: Severide has some people he’s got past connections with that we’ve seen coming back.

Any you can specifically say?

Newman: Actually, yeah, because he’s got Commander Pearce [John Sierros] who he owes a favor to who helped him out in dealing with the case at the beginning of the year. Now he’s coming back and has a favor to ask of Severide. It’s time for Severide to return the favor and he’s gotta take on something that he wouldn’t have taken on if it wasn’t for owing Pearce.