The Crown has entered the 1990s, and with it comes a new era of Princess Diana, this time portrayed expertly by Elizabeth Debicki.

Whether it’s her approach to that infamous BBC interview or embracing of Diana’s ’90s wardrobe, there was no shortage of ground to cover when TV Insider caught up with Debicki at the Netflix offices in New York City. Eager to answer our questions, Debicki offered some insight into Season 5’s version of events, particularly when it came to the princess and her onscreen translation of some real-life moments.

“I believe when there’s a kind of replication of certain moments, that in order to sort of do them our way, there’s… liberty taken with certain words,” Debicki said of some of the changes made in the BBC interview sequence. When asked about the swapping out of “unstable” for “crazy,” Debicki added, “I think it’s quite technical. I think they try and get it as close to the original, because obviously with that interview, for instance, it’s so incredibly revealing and provocative and telling of a certain feeling and mood and experience that they wanted to get it as close to the real thing.” When it came to collaborating with series creator Peter Morgan, Debicki said, “I’ve heard Peter speak about the construction of this season, because it’s obviously an interpretation of these real-life events, and I’ve heard him say before that there are certain events that happen during that period of time where you do have to do them.”

“I think with The Crown it’s often about allowing the audience to have access into the inner life of these people,” Debicki shared. “And previously a lot of what we know about them is… sort of a layer that’s for the public and then The Crown is endeavoring to sort of go into an imaginative version of these people’s inner working.”

As far as the inspiration behind her Princess Diana interpretation, according to Debicki, “I think it’s a real amalgamation of lots of different things. I did lots of research, I read lots of things. I never read things through the whole way though, because at a certain point you realize that the person writing the book, it’s from such a specific angle. It’s either their memory of the event or it’s their agenda.” 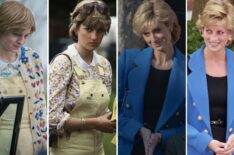 “The actor who comes before you informs what you do and you understand your role is really to pick up from what they’ve created,” Debicki continued, acknowledging Season 4’s Emma Corrin. “It’s a really unique job in that way, but it’s also a lovely feeling of it being a sort of continuation. The world already exists and you just have to sort of step into it and there’s a space for you to do that.”

See what else Debicki had to share about her role, Diana’s ’90s fashion, and much more in the full video interview, above.