The Goldbergs will soon have a new cast member, as Isabella Gomez is set to take on a new role in the long-running series.

According to Deadline, the star will play Carmen, a new server at the ’50s-themed diner where Adam (Sean Giambrone) is now working. Gomez previously starred as Elena in One Day at a Time, for which she won Best Supporting TV Actress at the Imagen Awards. 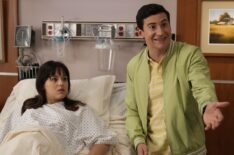 The character will make her first appearance on the November 30 episode of the show, titled “Million Dollar Reward.” With her recurring role confirmed, Adam just might have a new love interest!

When Adam decides to ditch his weekly dinner date with mom in favor of hanging out with his new colleague, Beverly decides he is pulling away from her too fast and plans a stunt to end his new social gains. Barry is also dealing with his own problems, realizing that med school is much harder than he thought it would be.

As the new season unfolds, Beverly is happy to have everyone back under one roof and is eager to lean into her new role — grandma.

Gomez has also appeared in Head of the Class as Alicia, and in Aristotle and Dante Discover the Secrets of the Universe, Initiation, A Cinderella Story: Christmas Wish, and Matador.