Jeopardy! has a new fan favorite on its hands as lovable professor Sam Buttrey secured his spot in the Tournament of Champions finals on Thursday (November 10) night.

An associate professor of operations research from Naval Postgraduate School in Monterey, California, Buttrey first turned heads by winning the inaugural Professors Tournament last December. During the competition, hosted by Mayim Bialik, Buttrey tested his trivia knowledge against 14 other professors from across the United States and ultimately won the grand prize of $100,000, as well as a spot in the Tournament of Champions.

After winning his semi-final game on Thursday, knocking out super-champ Matt Amodio in the process, Buttrey will now compete in the TOC finals next week, where he will face off against Amy Schneider and the winner on Friday’s (November 11) last semi-final.

Buttrey has quickly become a favorite among Jeopardy! fans for his impressive performances and witty personality. “Sam using his anecdote to call himself the most handsome man in the world immediately put me on his side. Legend,” wrote a user of the Jeopardy! Reddit forum, while another added, ” I am also rooting for Sam. He seems like an awesome man, and is hilarious as well.”

Here are six things you should know about the trivia-loving professor.

He Loves Being a Steve Martin Lookalike

One thing fans have commented on during Buttrey’s Jeopardy! appearances is how much he looks like comedian Steve Martin. However, this isn’t a new observation for Buttrey.

“It’s been very entertaining for me – I can’t speak for Steve,” Buttrey told Navy.mil last December. “Steve Martin is not only hilarious, he’s also a serious author and talented musician. I have been told I look like him for years, but I think I saw the resemblance most clearly on the ‘Jeopardy!’ cameras. Sadly, though, I never get compared to the famously good-looking people like George Clooney or Brad Pitt or Halle Berry.”

The Only Murders in the Building star even tweeted Buttrey after fans drew attention to the similarities.

So great to split the prize money with Sam! https://t.co/CBPQxyJHHF

“If the most famous thing I do in my life is get named in a tweet by Steve Martin, then maybe I haven’t lived my life properly,” Buttrey told the Resoundling Human podcast. “But it was very amusing to be part of this. I mean, everybody had good intentions. Good hearts. And of course, as I say, Steve Martin is great.”

He’s Watched ‘Jeopardy!’ Since He Was a Kid

Buttrey is a Jeopardy! super-fan, who has been watching since the show’s first incarnation in the 1960s. He previously told Monterey County Weekly that he remembers watching the show as a 7-year-old at his grandmother’s house. He and his wife, Elinda Hardy, continue to watch every episode to this day.

His Wife Helped Him Prepare For the Show

While Buttrey clearly has a wide knowledge base, he still put in the practice before his appearances on the long-running game show. The professor explained that his wife, Elinda, helped with his training, prepping him on subjects he’s less familiar with, such as “ballet, arts, and opera.”

He Has a Quirky Sense of Humor

Buttrey has endeared fans with his quick wit and quirky sense of humor during his time on the show. An example of this happened just last week during the first round of the TOC when Ken Jennings asked the professor if he could “vogue.” While Buttrey refused to vogue, he did show the audience that he could “floss,” with his dance moves receiving much laughter and applause from the studio audience.

He also revealed his funny plan heading into the TOC. “I’ve already scoped out a plan to fake a number of injuries,” he said in a video interview. “Because I figure Matt and Amy… those are nice people; they see an old guy suffering, they’ll stop what they’re doing and go take care of him, and in the meantime, I’ll buzz in!”

He Had No Idea There Was a Professors’ Tournament

When Buttrey applied to be on Jeopardy!, he had no clue that he’d end up in the Professors’ Tournament. In fact, he didn’t even know such a thing existed.

“I had applied for the regular Jeopardy, not knowing that there was going to be a Professors’ Tournament,” he told the Resoundingly Human podcast. “In fact, I’m not sure they had decided at that point. I learned after the fact that during the course of the summer, there had been advertisements urging professors to sign up. I guess at some point, they decided to hold a special Professors Tournament.”

“Of course, this was the first that they’d ever had. But when I tried out, I had just let them know that being a professor is what I do for a living. And I was lucky enough to get selected on that basis.” 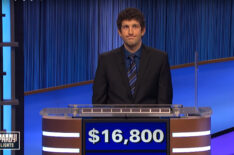 'Jeopardy!' Shock as Matt Amodio Loses in Tournament of Champions

His Dream Opponent Was Matt Amodio

After earning his spot in the TOC last year, Buttrey was asked who he was looking forward to playing against. “I know there are some strong players, but I want to go up against them,” he said. “I would like to play against Matt Amodio, he’s a strong player and I’d like to see how I can do.”

Buttrey got his dream match-up on Thursday night, and not only did he get to compete against Amodio, but he beat him.