The members of Bravo team just lost one of their brothers on SEAL Team — but it’s not something they could have seen coming.

Clay (Max Thieriot) has been trying to figure out his next steps since losing his leg at the beginning of Season 6, and it seemed like he found his purpose helping at Ray’s (Neil Brown Jr.) vet center. But just after he’d talked a vet, Ben, down from breaking into the Air Force recruit center, then taking his own life, Clay was the one holding the gun when a security guard showed up — and the one who took a bullet to the chest as a result.

Executive producer Spencer Hudnut explains why Clay was killed off and how everyone will be grieving. (Bravo will find out what happened in Episode 9, which you can see in the promo at the bottom.)

So Clay is dead?

Spencer Hudnut: Clay is dead, yes. Clay does not make it unfortunately. And yeah, it’s super gut-wrenching. It was the hardest decision I’ve had to make at SEAL Team by far. Super painful for me. I love Max so much. I love that character so much. Such a big part of my life for the last five years. When I was watching it [being] filmed, I had to get up and walk away. I’ve watched it a hundred times through the editing process, and it’s been super painful every time. It’s really gut-wrenching, and it’s painful and shocking, and so I’m sure it’s gonna upset a lot of people, but it’s upsetting that we ever got to this point where this had to happen. But ultimately, it felt like the best decision for the show moving forward.

Is this because of Max’s availability, or did he want to leave?

No, it wasn’t that he wanted to leave. Obviously, he started developing Fire Country, and even going back to the end of Season 5, that cliffhanger was motivated by the fact that there were some questions if Max would actually even be back for Season 6, and then I wanted to do everything in my power to keep Max involved in the show. But once his show was picked up and greenlit for series, it became clear pretty quickly that this wasn’t gonna be a job share. Fire Country — he created it and is the number one — was the priority. And so once he went off to shoot that, we weren’t gonna get him back. The logistics, [and] how we would incorporate him moving forward when our shooting schedule — because we do short orders — is all over the place, it just became clear that unfortunately he wasn’t gonna be able to continue forward with the show. And so, the question became how do we make his departure have the biggest impact? At that point, when his show was ordered to series, we had already been writing for two and a half months, and so we had written half the season. We didn’t have six months to figure out, OK, he’s leaving, how’s the best way to do this? He’s starring on a 22-episode CBS television show, so it wasn’t feasible to move forward with him here. We’re all so proud of him and excited for him, and the show’s so great and such a success, he’s gonna be doing that for the next four or five years, for sure.

Talk about killing him off in the way that you did. Did you consider any other possibilities?

Yes, there were a lot of ways to exit his character. For a long time, I really weighed maybe he and Stella (Alona Tal) and Brian do move out to California and live that life that they talk about in this episode. But because of his traumatic injury to his leg, he has a long road ahead to recover, and because the show is so much about vet issues and what our men and women in uniform deal with when they come home, it just felt disingenuous to send him off and just act like he’s riding off into the sunset, everything’s gonna be fine. That’s not a story worth telling, and it also didn’t feel like that would have such an impact on his teammates and the rest of our show. So, unfortunately, yeah, it felt like him dying would [have] the biggest impact.

Then it became a question of how do you do it? His story with Ben is sort of a full circle moment from his story with Swanny (Tony Curran) in Season 2 when he got involved with a vet with issues, and unfortunately, Swanny took his own life. Here, he’s able to save Ben from taking his. And so, in my mind, it’s a really heroic moment for him. He dies a hero.

It’s awful. The reality that he’d be safer on the battlefield with his teammates than at home is kind of shocking. But again, [for] our men and women in uniform, the problems don’t just exist when they’re on the battlefield. They come home with them, too. And so this was a way of really drilling that point home. Again, because we were so far into the season, there weren’t a lot of scenarios to figure out another way to exit him. But having that connection with Ben and saving Ben and letting him go out a hero was important to us.

Ray had admitted that he was worried about what the next blow would do to Jason (David Boreanaz) when it comes to his trauma, especially since Clay had been the one helping him and we’ve seen Jason blaming himself this season, so how worried should we be about Bravo 1?

He and Clay always had an up-and-down relationship, but I think the respect and bond were so clear throughout this season, particularly in Episode 6, that talk they had on the hill. I don’t think he’d ever admit it, but Jason admires Clay in so many ways, and Clay so looked up to Jason. And Jason’s faulted himself for Adam [Michael Irby] dying even though he wasn’t on the mission. And I think, yeah, this is a real threat to Jason. What’s good for Jason is that he’s opened himself up to people, [and] people understand what’s going on with him. He’s torn down the walls he built up in the past. He has a good support group.

But that survivor guilt will be spread not just to Bravo 1, but everybody on the team in some way will feel they could have done more for Clay. We’ll be exploring that in those last couple [of] episodes. Everybody’s gonna feel the loss but feel some guilt as well. 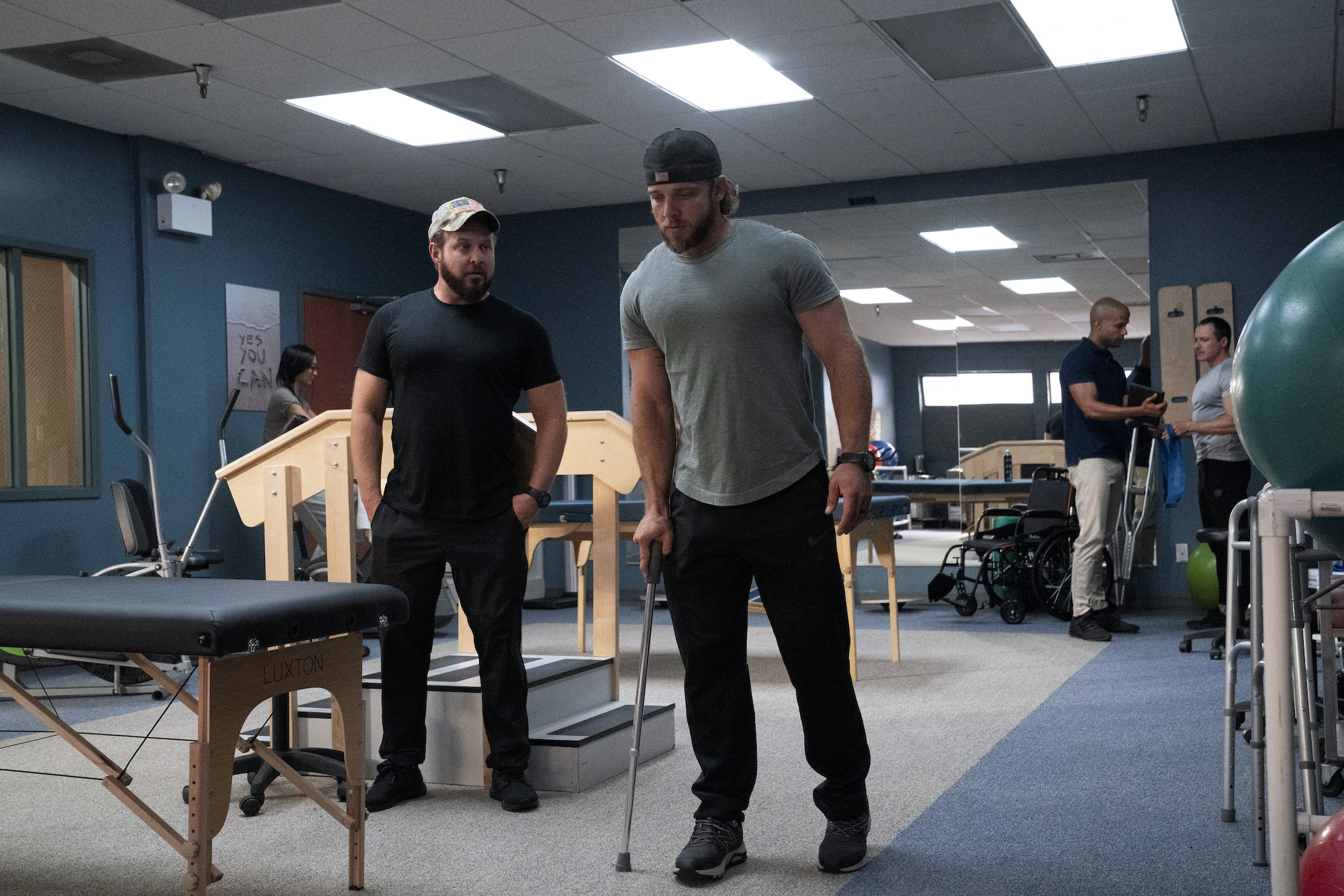 Especially since Bravo just almost lost him, but he lived, and I am so worried about Sonny (A.J. Buckley).

Yes, Sonny is the closest to Clay. Clay’s really his brother. The episode where they went up to the cabin, we got to see how strong that bond is and how strong that friendship is. So yeah, you’re not alone. I think there are several people within the Bravo family who are gonna be most concerned about Sonny. Sonny really felt like he was Clay’s caretaker after the injury, and so to have not been around, Sonny will feel some responsibility, some sense of, “if I wasn’t in Syria, I could have prevented this from happening.”

It’s gonna be a struggle for all of them. Obviously, these guys have all dealt with losses, the loss of a teammate before, but they’re almost wired to be able to handle it when it’s on the battlefield and makes sense to them. But this is so tragic and, again, the nature of what happened, and they’re not gonna get a full picture of it for a while. And so it’s really gonna be confusing, and it just makes it all the more upsetting for them. How will Stella handle the grief, and how much will we see? Because they had just been talking about their next chapter.

It’s obviously gonna be such a blow to Stella. We really were with Stella every step of the way in Episode 601 when she was dealing with the news of the injury. We actually went about it a little differently in these next few episodes, but I think her reaction on some levels will surprise people. She’s gonna be devastated, she’s gonna be crushed that she’s lost her husband. But she’s gonna have a perspective that is really valuable to some members of the Bravo family.

Ray is planning to retire, but there have been moments where it feels like he might be reconsidering. Is what happened to Clay going to play a role in that decision, whether it’s that he wants to stay for Jason or he more than ever sees the good he can do back home with the vet center?

It’s a good question. Unfortunately, with the connection between the vet center and Clay’s death, Ray’s gonna feel guilty about that on some level, and it taints the vet center on some level for Ray. I will say that the domino effect of Clay’s death and the choices that other Bravo members make will impact Ray’s decision moving forward in terms of not only whether or not he wants to retire but whether or not he’s able to retire.