Walker star Jared Padalecki is determined to appear on the show’s prequel spinoff Walker Independence, despite the 150-plus year gap between the two series.

“It’s totally something we’ve talked about and thought about since Day 1 of the conception of Walker Independence,” the actor told TVLine. Padalecki plays Texas Ranger Cordell Walker in the original CW series, which is a reboot of the 1990s western drama television series Walker, Texas Ranger. He also serves as an executive producer on Independence, which is set in the late 1800s and follows several ancestors of characters from the main series.

“And whether it’s a flashback on Walker or a flash-forward on Walker Independence, or whether they can dress me up enough to let me exist in Independence, just not as Cordell Walker, I see a bunch of fun ways to kind of integrate the two, and keep that Walker-verse thriving and throw in Easter eggs,” the Supernatural alum continued.

The two shows have already had one significant crossover, as Matt Barr, who played Hoyt Rawlins on Walker, stars as his ancestor (also named Hoyt Rawlins) on Independence. So there is precedent. 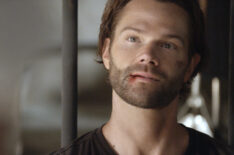 Jared Padalecki Teases a Dark Future for the ‘Walker’ Boys: ‘It Gets Real Bad'

However, one of the major obstacles is that Walker films in Austin, Texas, while Independence shoots in Santa Fe, New Mexico. This makes a cameo appearance a little more difficult. That said, Padalecki is adamant that he will make it happen somehow.

“I refuse to let Walker Independence carry on without me being on screen in 19th century Texas in some way, shape or form,” he added.

Walker is currently airing its third season, which premiered on Thursday, October 6, while Independence is in the middle of its debut season, also airing Thursdays after its parent series.