Told she must marry the man who sexually abused her as a child, Amish teen Rachel Albrecht (Dylan Ratzlaff) faces a desperate choice in An Amish Sin: Stay and live in misery and fear or run away and take her chances far from the only home she knows.

In this moving drama based on real-life stories of women who were abused in religious communities, Rachel opts for the latter…and pays a price. “I hope people find courage within this movie,” Ratzlaff says. “Although it’s about the Amish, many people can feel inspired by her [as she’s] trapped in this situation and finds the courage to break out.” Rachel’s abuser, Uncle Iddo (Micah Steinke), has continued to torment her, saying at one point, “I know the wicked thoughts of your black little heart.… You’re broken, Rachel.” But when she tries to escape, she’s sent to a facility where, she’s told, “they help girls who’ve lost their way.”

Later, she’s shunned by her family, including her cold, angry mother (Kellie Martin) and stern father (Troy Mundle), who blames Rachel for “tempting” her abuser. Despite the setbacks, the pious, hopeful Rachel never succumbs to despair — “I just loved the light that she was,” Ratzlaff says — and finds an ally in Grace (Rukiya Bernard), a photographer who takes her in when she finally breaks free. 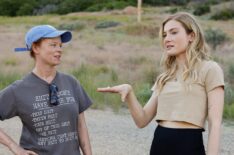 To connect with the story, the actress had a source that was very personal: her own Mennonite lineage. “I don’t practice,” Ratzlaff notes. “I’m a dancer, and they don’t allow dancing.” But before filming began, she called her grandmother for insights into their family history.

The current lesson is even more important. Ratzlaff hopes An Amish Sin resonates, adding: “This story is happening today.”

An Amish Sin where to stream