A year ago, 22-year-old Gabby Petito became headline news when the aspiring travel influencer went missing during a cross-country trip with her fiancé, Brian Laundrie. Now her short life and violent death at his hands are the subject of a Lifetime docudrama, The Gabby Petito Story, starring Skyler Samuels (Scream Queens) and Evan Arthur Hall (Orange Is the New Black).

“She was attempting to build this life for herself online, then realized, unfortunately too late, that was one very large facade, and her real life was much more turbulent,” says Emmy nominee Thora Birch, who makes her directing debut and plays Gabby’s mother, Nichole Schmidt. Petito’s saga ended after her body was recovered in Wyoming and Laundrie committed suicide, claiming responsibility for her death in a notebook found nearby. Birch’s film — which follows the known facts and dramatizes the unknown — travels back two years to the start of the couple’s relationship.

At that time, buoyant, beautiful Gabby seems like the stronger one while insecure Brian, on anxiety medication, fears losing her. He grows increasingly possessive and, eventually, abusive as they move from New York to Florida, face pandemic isolation, and road-trip the U.S. so Gabby can chronicle their adventures on social media. 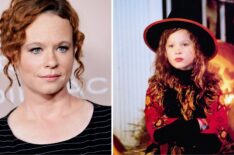 Thora Birch Reveals Why She Didn't Return for 'Hocus Pocus 2'

Birch praises her lead actors for their handling of so many challenging heated scenes, like the re-creation of the Utah traffic stop — captured on police body-cam — that shows a deeply distraught Gabby. “It got very emotional from time to time, as I think it should have,” she recalls.

A Beyond the Headlines documentary follows the film at 10/9c; both air in conjunction with Domestic Violence Awareness Month. “The trick in what we were trying to portray is how it’s easy to think something could have been done, should have been done, but when you’re in those situations, you don’t even realize,” Birch says. “And they were very, very young. It was a horrible tragedy on all counts.”