A creepy new teaser for HBO Max‘s Titans suggests things are about to get very bloody in the upcoming fourth season, set to premiere on Thursday, November 3.

The trailer (watch below) shows a pool of blood surrounded by ritualistic markings as a bloody hand slowly emerges from the pit. While we don’t know for sure, it’s reasonable to assume this is the iconic Titans villain Brother Blood, the new big bad of Season 4, played by The Originals alum Joseph Morgan.

In the original comics, Brother Blood is the leader of a cult named the Church of Blood, which worships Raven’s (Teagan Croft) father, Trigon, who briefly appeared in the first season. The new season will see the Titans heading back on the road after saving Gotham, but after a stop in Metropolis, they’ll find themselves in the crosshairs of this powerful and supernatural cult.

Teasers of Lex Luthor and Mother Mayhem in action were revealed at this past weekend’s New York Comic-Con, as well as the new comics-accurate costume for Gar Logan’s Beast Boy.

titans are heading back to metropolis.

the titans take on their deadliest foe yet in season 4, part 1 premiering november 3 only on @hbomax #DCTitans #DCatNYCC pic.twitter.com/zgcQnXdsxB

Titans was developed by Akiva Goldsman, Geoff Johns, and Greg Berlanti and is based on the DC Comics superhero team, the Teen Titans, first created by Bob Haney and Bruno Premiani. It depicts a group of young heroes who join forces in their fight against evil and stars Brenton Thwaites, Anna Diop, Curran Walters, Conor Leslie, Alan Ritchson, Minka Kelly, Chelsea Zhang, and Joshua Orpin. 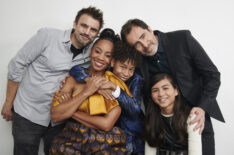 After the two-episode premiere on November 3, one episode will drop weekly on HBO Max through December 1. The second half of Season 4 will be released in 2023.