Last month, Davies brought up the idea of offering cash bonuses to contestants who correctly answer an entire column of clues under one topic without bouncing around the board. Some fans, including former Tournament of Champions winner Buzzy Cohen, worried that this new rule might have a negative impact on the gameplay.

Davies touched on these concerns on Monday’s (October 3) Inside Jeopardy! podcast, where he spoke with fellow Jeopardy! producer and former Clue Crew member Sarah Foss. While the new rule is something Davies is seriously mulling over, he stated that it hadn’t yet been implemented, so people don’t need to be worried.

“A lot of response, we should say, to my, let’s say, positing the not yet reined-in idea that I floated. It doesn’t need to be reined-in yet because it hasn’t been enacted in any way,” Davies said.

“But a lot of responses on social [media] to award a prize of some sort to people who run a category on Jeopardy! That would not…would not affect gameplay. It would not add to that game total; it would not be there [on players’ scores]. It would be a separate thing.”

When Davies previously mentioned the idea on the podcast last month, Cohen said, “It’s going to affect gameplay strategy, and I don’t know if that’s something you’re interested in doing.”

Fans on the Jeopardy! Reddit forum expressed similar concerns. “I’d worry about the category running bonus creating perverse incentives to do something other than ‘win the game’,” wrote one viewer. “Please, no bonuses for sweeping categories. We don’t need to be making changes to the basic gameplay,” added another. 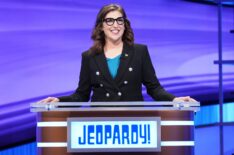 However, Davies countered these arguments, stating, “It might also give incentive to trailing people to go into a category and get something from the game beyond their second or third place prize.”