Is the October 5 episode of Chicago P.D. going to be Jesse Lee Soffer’s last? The promo certainly makes it look that way (or there’s a major twist coming), and what’s worse is we’re now very worried about where it could leave partners and spouses Jay Halstead and Hailey Upton (Tracy Spiridakos), even if he’s not killed off.

“For someone, this is the end,” the Season 10 Episode 3 promo warns. “I’m here to tell the truth,” Jay says. And it ends with Upton with tears in her eyes. Watch it below.

What looks to be an emotional episode for “Upstead” is coming after the September 28 “The Real You” left them in a rocky place. The first sign things were off for the couple came when Upton asked if anyone had heard from Jay. Burgess (Marina Squerciati), understandably, was confused: “You haven’t?”

After Jay and Voight (Jason Beghe) joined the rest of Intelligence, Upton asked her husband where he was, noting he’d left early that morning. “I was with Voight,” Jay said. Why? “Nothing important,” he insisted, focusing on the case. Then, to her surprise, when a guy pushed Voight, Jay reacts somewhat violently, pinning him to the wall. Though Upton kept telling her partner “enough,” Jay argued, “he assaulted an officer.”

Later, as they were wrapping up the case, Jay told Upton he’d see her at home since he was handling the paperwork. That was when she asked about something his brother Will (Med‘s Nick Gehlfuss) mentioned during a case-related call earlier: that he treated Voight earlier and Jay was with him. Voight’s stitches reopened, and they had Will take care of it off-book so he wouldn’t be benched, Jay explained. But why didn’t he tell her, she wondered, admitting, “I feel like lately, it just doesn’t feel like you, doesn’t feel like us.” Jay insisted he just didn’t want to drag her into it and was trying to protect her since it was technically illegal. 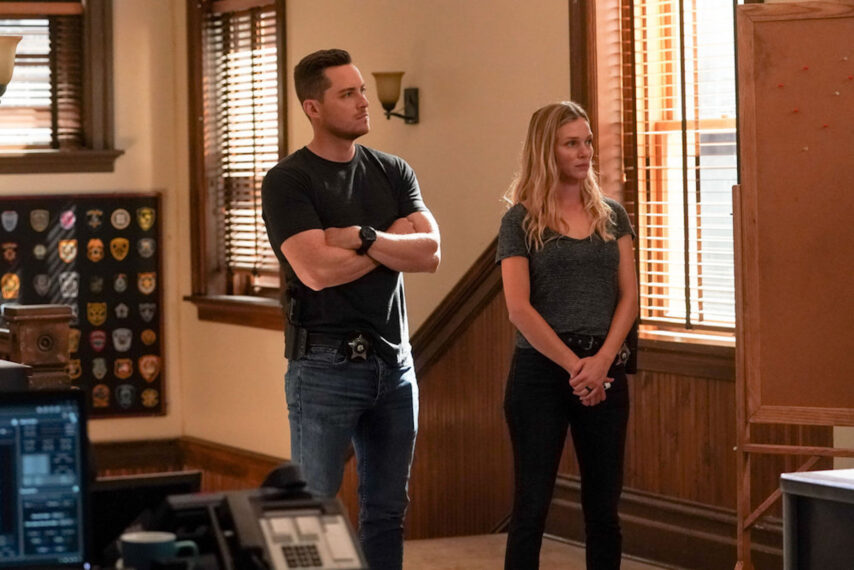 But if that was all it was, as Jay said, why did he choose to tell Voight in person at the end that the paperwork was finished and join him for a drink, rather than go home to his wife? The truth of that is going to have to come out, too, and perhaps that’s what we’re seeing at the end of the above promo.

While we can only speculate as to how Jay is written out and when — Is he killed in the line of duty? Does he choose to leave Intelligence? Is it in Episode 3 as the promo strongly implies? — we do know that it does seem like we need to be worried about Upton and Upstead as a result of what’s about to happen.

“Their marriage has always been so fun and interesting to write because it came out of these tragic events last season and it was almost the two of them trying to grab onto something that made sense and to grab onto each other, to sort of be each other’s anchor and make it so that there was gonna be something good that came out of all this bad. So they already have this interesting, rocky place that they’re starting out at,” showrunner Gwen Sigan told TV Insider. Following Jay’s exit, Upton is “left in this, I would say, almost a vacuum, this emptiness of how do you move on? What the hell does that look like? In so many ways, he’s the love of her life, they’re partners at the job. They almost can always think and know what the other person is thinking,” she continued. “And so to suddenly have that be gone and for Upton who perhaps is not very well-versed in how to deal with her emotions in always a healthy way — she’s someone that tends to go towards avoidance — it’s going to all hit a head and come to a point where we’ll see it and we’ll see it come out on the job and in cases how she deals with being alone.”

Now, given what we’ve seen of Upstead in the latest episode and that promo, we can’t help but think that Jay’s last episode will not leave them in a good place, even if he’s alive at the end of it. Something’s gotta give with that tension between the two of them.