Atlanta is taking a trip across the pond for a season full of European misadventures, and FX has a sneak peek of it all in the new trailer for Season 3, which premieres on March 24.

The third season, filmed almost entirely in Europe, finds Earn (Donald Glover), Alfred “Paper Boi” Miles’ (Brian Tyree Henry), Darius (LaKeith Stanfield), and Van (Zazie Beetz) “in the midst of a successful European tour, as the group navigates their new surroundings as outsiders, and struggle to adjust to the newfound success they had aspired to,” reads the season description.

The group’s globetrotting journey will see them venture to countries such as France, England, and the Netherlands, unlike Seasons 1 and 2, which were set in the show’s titular city.

“I’ve been roaming the streets since last night. High since twilight. This city is my Jesus,” professes Stanfield’s Darius.

The highly-anticipated season comes after creator, star, and executive producer Glover took a hiatus from the series following Season 2 in 2018. Announced in February 2022, the show’s recently announced fourth season will be its last. 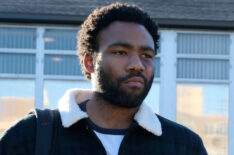 'Atlanta' Ending With Season 4 on FX

The hit comedy returns in March after a three-year hiatus.

Dealing with awkward airport security scans, street clowns, annoying schoolboys, peacocks, and more, these final episodes are sure to take the characters on a wild ride. “We should probably get going. It’s getting a bit intense,” states Darius.