It’s a very rough day on and off the job for Assistant Special Agent in Charge Jubal Valentine (Jeremy Sisto) in the latest FBI episode.

First, he stops by the hospital only to find out that Rina’s parents have taken her off life support. He then insists on working the case, rather than taking time to grieve, and he throws himself into trying to find a missing girl. The investigation leads to the suspect’s previous victim and her grieving father, whom Jubal pushes in hopes he can help find the person responsible. When the father then goes to the hospital with a gun to take out his daughter’s killer, it’s up to Jubal to talk him down.

Sisto breaks down the episode.

Talk about losing Rina and the effect on Jubal. It’s such a significant loss, especially since they were seemingly finally making a relationship work. They were happy and had that sweet moment before she was shot.

Jeremy Sisto: He’s a recovering alcoholic, as we know, and starting a relationship after you go through the program like that, they talk about the process of being able to be open to a relationship. I think you have to have a plant first and then a pet before you can be sure that you can take on the emotional challenges and the responsibility of a relationship. Add to that his divorce and his kids and wanting to prioritize them, Jubal spent a long time being very careful to not let things happen too fast. And so he was at a really good place in his life. He obviously felt like he was strong enough to do this. And for something like this to happen at that moment is going to bring an abundance of challenges. I believe in his resilience and also his ability to be self-aware and to understand the pain and the struggles that are to come. 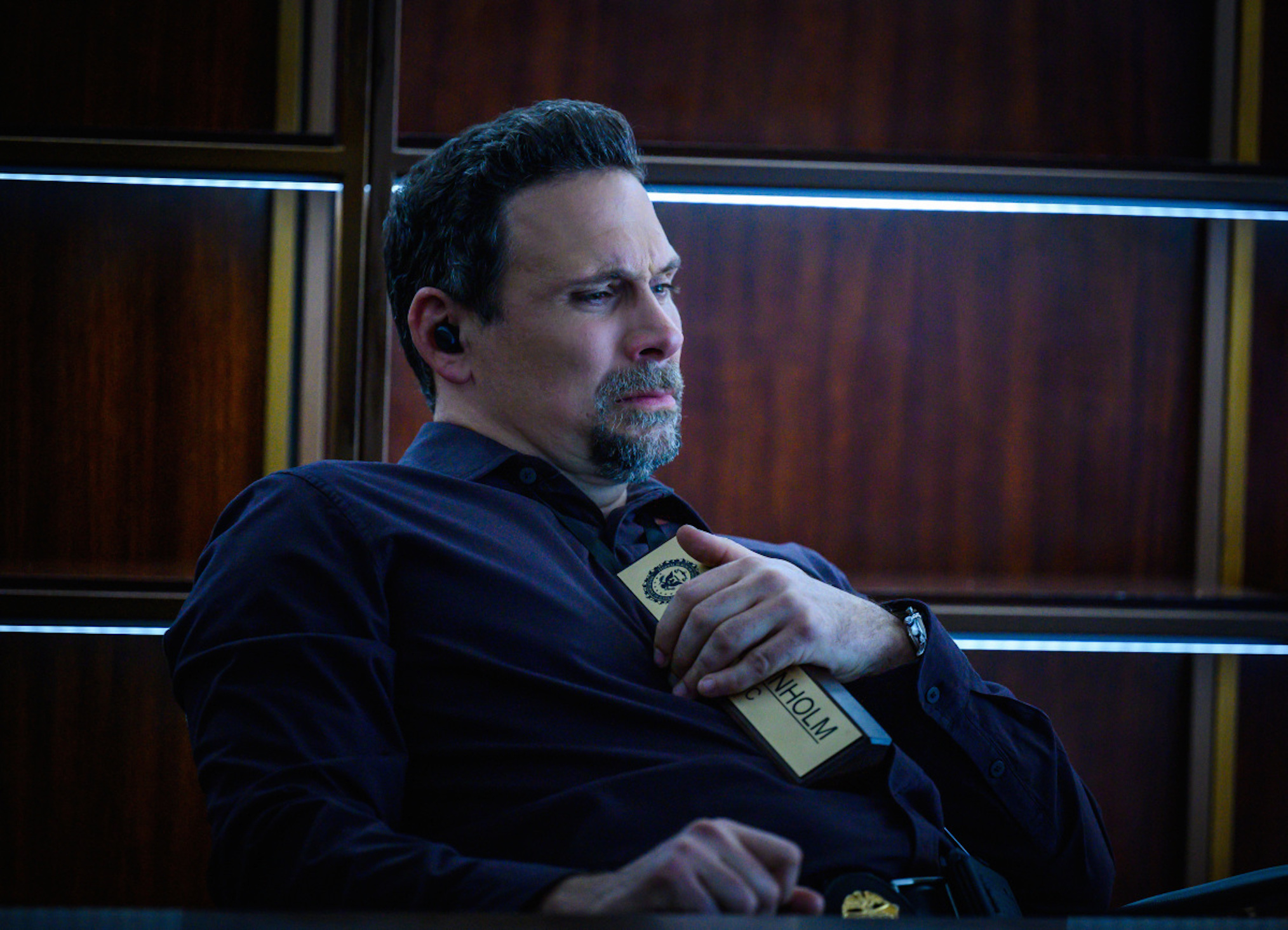 They cut this scene where Jubal was talking to Isobel [Alana de la Garza] and basically it’s the moment before the scene where he’s in [Rina’s] office, and he says that he’s gonna take some time off. That clearly states that the writers and the people that are telling the story of Jubal, including myself, see him as somebody who will be able to manage the storm, hopefully, of the grief, but grief is a tough process. What I found interesting about this episode is they did an interesting thing with, sometimes when you go through something really hard, there’s a delayed effect. There’s a period of time where you’re not feeling the emotion. You’re aware of the scale of what’s happening, but you can’t really feel much, and that’s sort of what happens with Jubal in this episode. He sort of channels that emotion into this case and into this other man who’s grieving, and he gets a little mixed up there. So yeah, it was a hard day for Jubal and we’re hoping he can stay on track and just grieve a great possibility that was coming to light in his life.

And he didn’t get to say goodbye because when he shows up at the hospital at the beginning and found out that she’d been taken off life support.

Yeah, and it’s interesting. I had a good friend who passed in this way last year and my best friend was her husband. The question always for me is, is that harder or easier for someone to do some of that grieving while the person’s physical body is still there and perhaps part of their mind can hear what’s happening? But whether or not they can hear, is it easier for the grieving to have that? And in some ways I think it is and it can be. It’s never fun at the end when they go, whether or not you get to say goodbye or not.

But I think in some ways, he knew she wasn’t coming back for a period before she actually went. So I don’t know. In some ways, it might help the grieving process to have that, so that was how it turned out for him, but yeah, frustrating at the end to not know and to not get that moment. But I see the time before that as he had many moments with her, where he was able to speak with her. Then her mom says the exact thing he probably wasn’t ready to hear, that Rina took the job to be close to him. Jubal says he didn’t know that, but did part of him maybe know?

It’s funny, I don’t think that line was actually in the script. It might have been, but how I remember it is is kind of just hearing that and whether or not he knew it — because it was coming at him as an accusation as well. She’s angry and she needs to blame someone, and in that moment, she’s saying, “This is your fault. If it weren’t for you, my daughter would be [alive].” He was not unaware of the fact that she was blaming him. But there was also something beautiful about it. The beginning of relationships are insecure. There’s a certain amount of uncertainty, especially when your relationship before was as complicated as theirs. They hooked up first when they were both married and he was drinking, and it was obviously not the most romantic of ways for a relationship to start.

Maybe part of the reason it was kind of an interesting moment, too, was because when her family decided to pull the plug without his knowledge, it was a harsh reminder of “yeah, you were a new relationship in her life.” So it was real easy for Jubal to think, “Maybe I’m exaggerating my role, how hard I should be taking this or how close we were. Maybe she wasn’t as into me as I thought she was.” And to hear that she moved there for him was kind of, in a way, a nice reminder for him that she was in the same place that he was. 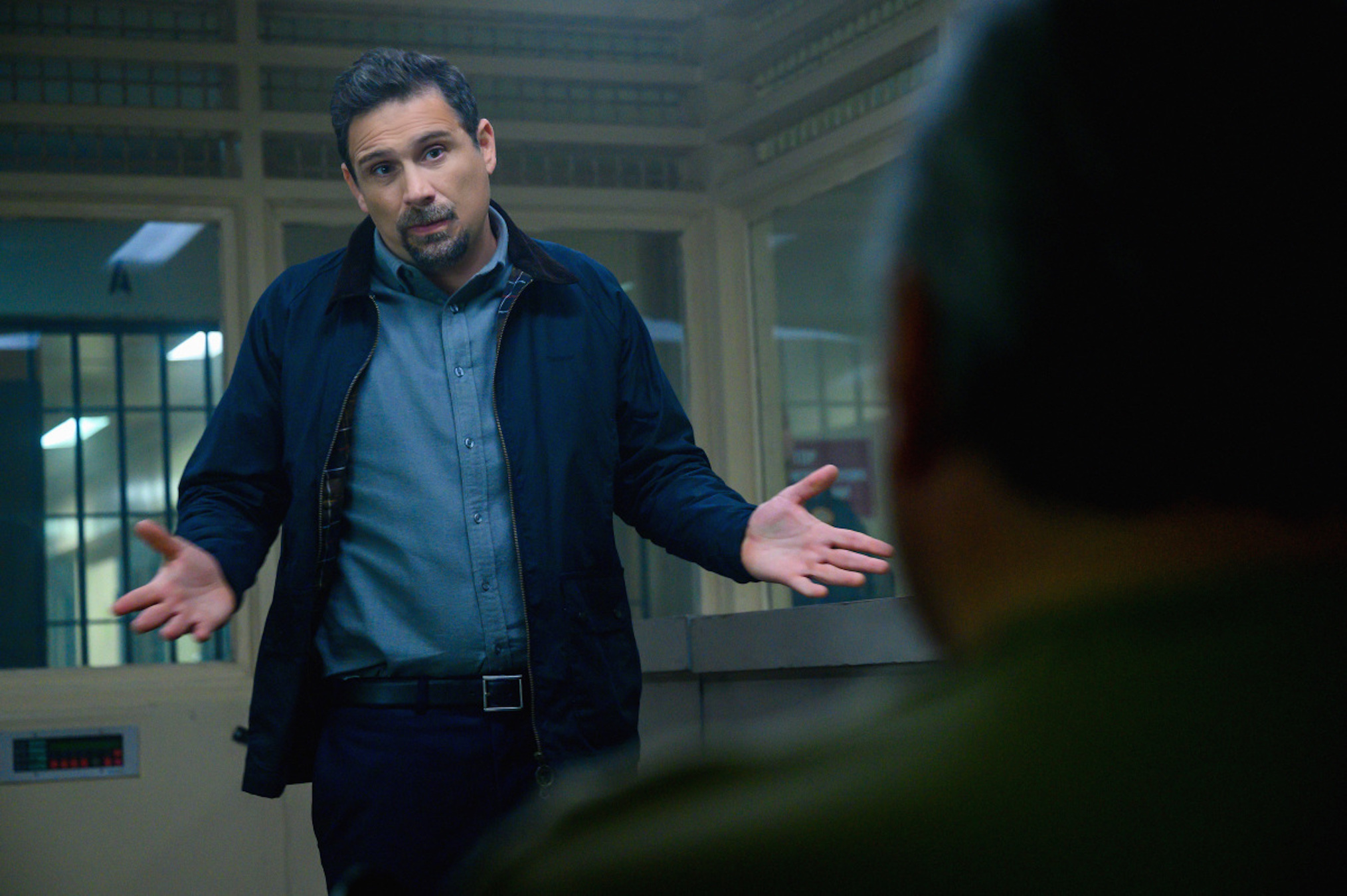 Vargas (David Zayas) is still very much a concern, even in prison, but Jubal told Phillip that he doesn’t think revenge will fill the hole of his loss. How much is it weighing on Jubal that Vargas can become a major threat again?

People in this profession have to live with a certain amount of danger, a certain amount of knowing there are bad, dangerous people out there that hate them and that would love to see harm come to them because of their role. So I think he’s able to put it out of his mind to some degree. It has not yet come up in subsequent episodes. One of the fun things about being on the show is it’s kinda like life. You never know exactly what’s coming at you, but you know there’s some kind of brain somewhere considering the possibilities. And I know I’ve got a really smart team of writers led by Rick [Eid] considering the way forward and the stories to tell here. We’ll see. I think there’s gonna be a really fun series of episodes, an episode. I don’t know. Something’s gonna come, I imagine, at some point, but that’s above my pay grade.

So Jubal’s moved on from that “we can make some moves to have him taken off the board” mindset?

Yeah. I think that was a moment, and Isobel called him on it. You’re in this job because you believe in the system. If you’re there for the right reasons, you believe in the justice system, you believe in the police and how the society you’re in, how they handle these dangerous situations. So to go outside of that and do some kind of vigilante justice version is diametrically opposed to that commitment. That was just a weak moment for Jubal. How are we going to see Jubal grieving going forward?

It’s hard to say. They have dedicated more episodes to the character than they have in earlier seasons, so I’m not sure how much time they’re planning on spending on it. I know at the end of the day, what makes the show great is the characters, for sure, but also just the telling of these stories, and it’s a challenge to write these stories, these crimes, and have them realistically cross themes with our character storylines. I hope to see that continue forward, but people also might be like, “[I’ve] seen enough of grieving Jubal, just let his son be healed, and let’s move on to the world.”

So, as an actor, obviously, I’m always excited to have challenging and complex scenes and arcs. But I am first and foremost a team player and just continue to want to tell the story of how this JOC works. That, to me, is the fun of my job. The writers and the actors [and everyone behind the cameras] in the JOC and the extras, we’re all trying to make this room as active and realistic and fun as possible and a place that is fun to be around. So that’s where I’m focused now.

But [the grief is] in the back of Jubal’s mind, of course — not too far in the back — and I do stuff sometimes in scenes where I’ll just add something that something’s happening off camera, but you can’t do it too much because then it’s just a little weird. It’s like you’re leaving the audience out of the equation. These agents have to be focused on their cases. So we shall see, but I’m open for it, and I think Dick Wolf has such a great read on his audience that I just trust that if there is going to be more of Jubal toiling with these challenges outside his work, then the audience is gonna want it. And if it doesn’t come, then they’ve had enough for a while and he’ll spend some time in the JOC working these cases.