[Warning: The below contains spoilers for the And Just Like That finale episode.]

Chris Noth will not appear in the upcoming finale of HBO Max‘s And Just Like That as the streamer has removed the actor from the show following accusations of sexual assault.

As first reported by TVLine, Noth has been scrubbed from the finale of the Sex and the City revival, which will air on February 3. According to reports, Noth’s character, Mr. Big, was set to feature in a fantasy sequence where Carrie (Sarah Jessica Parker) reunites with her former lover while scattering his ashes at Paris’ Seine River.

Mr. Big was killed off in the first episode of And Just Like That after suffering a heart attack following a workout on a Peloton. The character’s surprise death was planned well before the allegations of sexual assault came to light.

The creative team behind And Just Like That are said to have decided that the footage Noth had filmed with Parker in Paris was not significant enough to the narrative and could be cut without changing the overall purpose of the scene, which is about Carrie finding closure.

In December, two women spoke to The Hollywood Reporter with claims of sexual assault against Noth. A further three women came forward in the proceeding weeks with similar accusations.

“The accusations against me made by individuals I met years, even decades, ago are categorically false,” Noth said in a statement following the first two accusations. “These stories could’ve been from 30 years ago or 30 days ago — no always means no — that is a line I did not cross.” 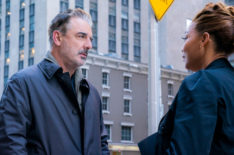 Noth was recently dropped from his starring role on the CBS crime drama The Equalizer, with his final appearance taking place this past Sunday. In addition, a Peloton commercial starring Noth, which poked fun at his And Just Like That death, was also pulled following the allegations.