If you’re already caught up on Servant, you’re already aware that last season, all hell broke loose, from Dorothy (Lauren Ambrose) tormenting Leanne (Nell Tiger Free) to Julian (Rupert Grint) relapsing on cocaine to Jericho being revived again. But most importantly, Leanne kills her Aunt Josephine (Barbara Sukowa), which will be the catalyst for something darker and stronger in Season 3. (The Apple TV+ psychological-horror series, directed and executive produced by M. Night Shyamalan, returns on Friday, January 21 — check out an exclusive first look featurette from the new season above!)

“As we start Season 3 and everything is sort of serene and lovely, that quickly devolves,” Ambrose tells TV Insider. “I feel like we really lean into the thriller genre and push that very quickly and very intensely from the first episode.” Adds Toby Kebbell (who plays Sean Turner), “there’s lots in store and a lot of things answered.” This is fantastic news since Servant maintains an ambiguous nature that reveals answers at an unhurried pace. Thus, it leaves us antsier to know if this upcoming season answers any of our burning questions. We turned to the cast to find out.

Will Dorothy ever find peace again?

Dorothy has gotten back the only thing she wanted. However, does this mean she can now live in harmony? Knowing Servant, probably not.

She returns to work and wants “to be taken seriously,” according to Ambrose. “Dorothy’s mental health ends up kind of freeing because she’s trying to stay strong and stay powerful, but everything is built on a lie, so it’s really difficult to do that as she continues to try to put these pieces together.”

We also saw the abusive relationship Dorothy had with Leanne, which makes us wonder, how does this power dynamic come into play in season 3? “Leanne is asserting her will and power over this situation more and more in a sort of unhealthy way,” Ambrose previews. “I think Dorothy sees her as this very disturbed young woman who really needs way more help than this family can give her, and it gets very unstable in the house.”

Oh, how the tables will turn! Where do we find Sean in Season 3?

Kebbell’s character goes on a spiritual journey that is different from what we’re used to seeing from the skeptical and reserved Sean we know. The trailer shows him feeding squatters who are mystically linked to Leanne.

“He’s trying to be as grateful as he possibly can, and of course the downfall of that is he has to acknowledge the worst part of it to be able to,” Kebbell explains. “He’s trying to be a different version of himself. However, I don’t think it will work.”

Regardless, we watched him grow more compassionate towards Leanne last season, which will continue. He’s “on this path to making her feel more heard or listened to,” which ultimately interferes with his loyalty to his wife, Dorothy, the actor teases.

There is unsettled tension between the married couple, and Kebbell reveals that Sean “just thinks that if he believes he loves her enough, then it will be OK, but unfortunately, I don’t think it will [because] we start to see those cracks open, even more, symbolized by the cellar. The cellar is Sean’s soul opening.” How does Julian cope with his guilt?

Last we saw Julian, he slept with Leanne while in a relationship with Natalie (Jerrika Hinton) — yikes — and he reverted back to drugs, which led to his overdose. He was rescued by Leanne.

“Julian is a very different person when we find him in the beginning of Season 3. He’s in recovery. He’s sober now and trying to keep fit, doing lunges in various parts of the house,” Grint laughs. “I wasn’t prepared for that, it absolutely killed me. ”

However, last season we learned the tragic reasons behind Julian’s drug and alcohol addiction: He blames himself for Jericho’s death. Now that Jericho was brought back, how does he process that guilt? “We see him proactively investigate and try and find a reason that can explain everything. It’s weird for me kind of working out who Julian is without a drink, because for me, that was such a fundamental of creating him, because it was just always there,” Grint says. “His relationship with Sean as well was always linked to drinking wine in the cellar.”

Grint and Kebbell have amazing chemistry whenever on screen together; however this season, they are, sadly, more separated from each other due to their own character’s journeys. “I love how those two communicate. They have this very specific way, this kind of rhythm,” Grint smirks. “I always look forward to those scenes. Hopefully that will come back.”

“From the very beginning, the first time we shared a scene, we both played our roles,” Kebbell chimes in. “When they come together, it’s absolutely perfection. We got very lucky with the language!” Servant received an early renewal for Season 4, which will be the final chapter of the series. The cast will be returning to set in January, according to Ambrose, who has “an inbox full of Servant scripts” she has to get through. “It’s pretty intense and furious when we get at it,” she grins.

Even though the show explores unsettling material, it’s not always tense on set. “We break [the tension] when we’re there,” Kebbell laughs. “We waste everyone’s time by getting the giggles — we’re juvenile kids — but I thoroughly enjoy it and I think everyone enjoys a respite of a giggle.” Life appears to be back to normal, but not for long.

We’re anxious to see what this season (and the next) will have in store for us. But we already know whatever that may be, these installments are going to be filled with some dark humor and complete and utter chaos. 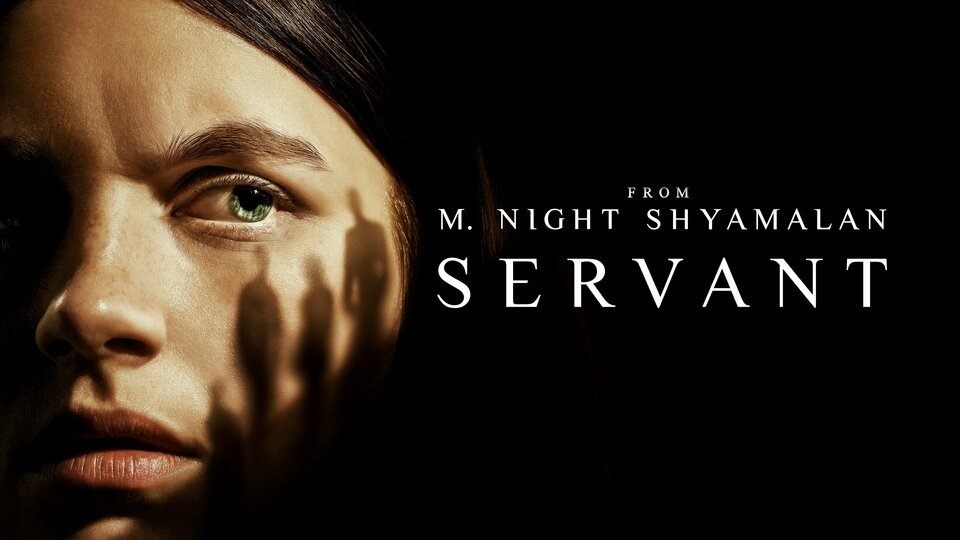