The Turkey Day NFL tradition is back Thursday, November 25, with three national TV games on the menu.

First up, the Chicago Bears (3-7) are at the Detroit Lions (0-9-1) in an NFC North contest on Fox. Quarterback Jared Goff and the Lions are still looking for their first win of the season, while the Bears have lost five straight games and have faded from the NFC playoff picture. Bears rookie quarterback Justin Fields suffered a rib injury in Sunday’s 16-13 loss to the Baltimore Ravens and might be replaced by backup Andy Dalton. In Week 4, the Bears earned a 24-14 win over the Lions. Thursday’s matchup marks the 19th Thanksgiving Day meeting between the Bears and Lions, dating back to November 29, 1934. Then on CBS, the Las Vegas Raiders (5-5) are at the Dallas Cowboys (7-3) at AT&T Stadium in Arlington, Texas. Quarterback Dak Prescott, running back Ezekiel Elliott and the Cowboys hope to keep their lead atop the NFC East standings and bounce back after a tough 19-9 loss to the Kansas City Chiefs on Sunday. Quarterback Derek Carr and the Raiders have their eyes on a strong finish to the season and a shot at the playoffs in the competitive AFC West. Thursday marks the third meeting between the two franchises on Thanksgiving.

In primetime on NBC, the Buffalo Bills (6-4) are at the New Orleans Saints (5-5). Quarterback Josh Allen and the Bills were favored to win the AFC East, but they’re currently trailing the New England Patriots in the standings and are coming off a 45-15 blowout loss to the Indianapolis Colts on Sunday. Saints quarterback Trevor Siemien had a four-touchdown performance in Sunday’s 40-29 loss to the Philadelphia Eagles. The Bills are 4-4-1 all time playing on Thanksgiving Day. The Saints are 3-0 on the holiday. 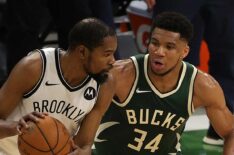 Hopefully, this year’s games will go off without a hitch. The Thanksgiving 2020 primetime game on NBC was postponed due to a COVID-19 outbreak.