[Warning: The below contains MAJOR spoilers for The Good Doctor Season 5 Episode 7 “Expired.”]

As the Good Doctor winter finale begins, Dr. Shaun Murphy (Freddie Highmore) and Lea Dilallo (Paige Spara) think they’ve found the perfect wedding venue. But, as it’ll turn out, the squeaky floor as they walk down the aisle is the least of their worries.

As they’re driving back from the church, Lea tries to talk to Shaun, only to be interrupted when Shaun spots a car accident. She eventually does get to talk to him, revealing she actually went to Montana to visit Dr. Aaron Glassman (Richard Schiff), not on a business trip, a couple weeks ago. She was worried about him, with all the changes at the hospital lately. But Shaun thinks everything’s fine, considering his patient review scores went up. That’s when she has to tell him that only happened because she omitted the reviews where people said mean things about him. She wanted to protect him, she tries to explain, but he won’t accept her apology and leaves.

Fix his scores, he tells her later. She can’t, Lea tries to explain. So Shaun wants her to tell Salen Morrison (Rachel Bay Jones) what she did, even if she loses her job because of it. She broke the rules, maybe she should be fired, he tells Lea.

Meanwhile, Shaun spends the episode treating Alma (Natalee Linez), a pregnant woman he helped on the scene of the accident. Due to her injuries, she only has two options to stabilize her broken bones: one that will mean she’ll likely never walk again, and the other that would mean having to do a C-section to deliver her baby, but there are risks with a premature (26 weeks) birth. Alma, eventually, decides to do what’s best for her baby, but due to a delayed reaction to the crash, they must perform an emergency C-section anyway. 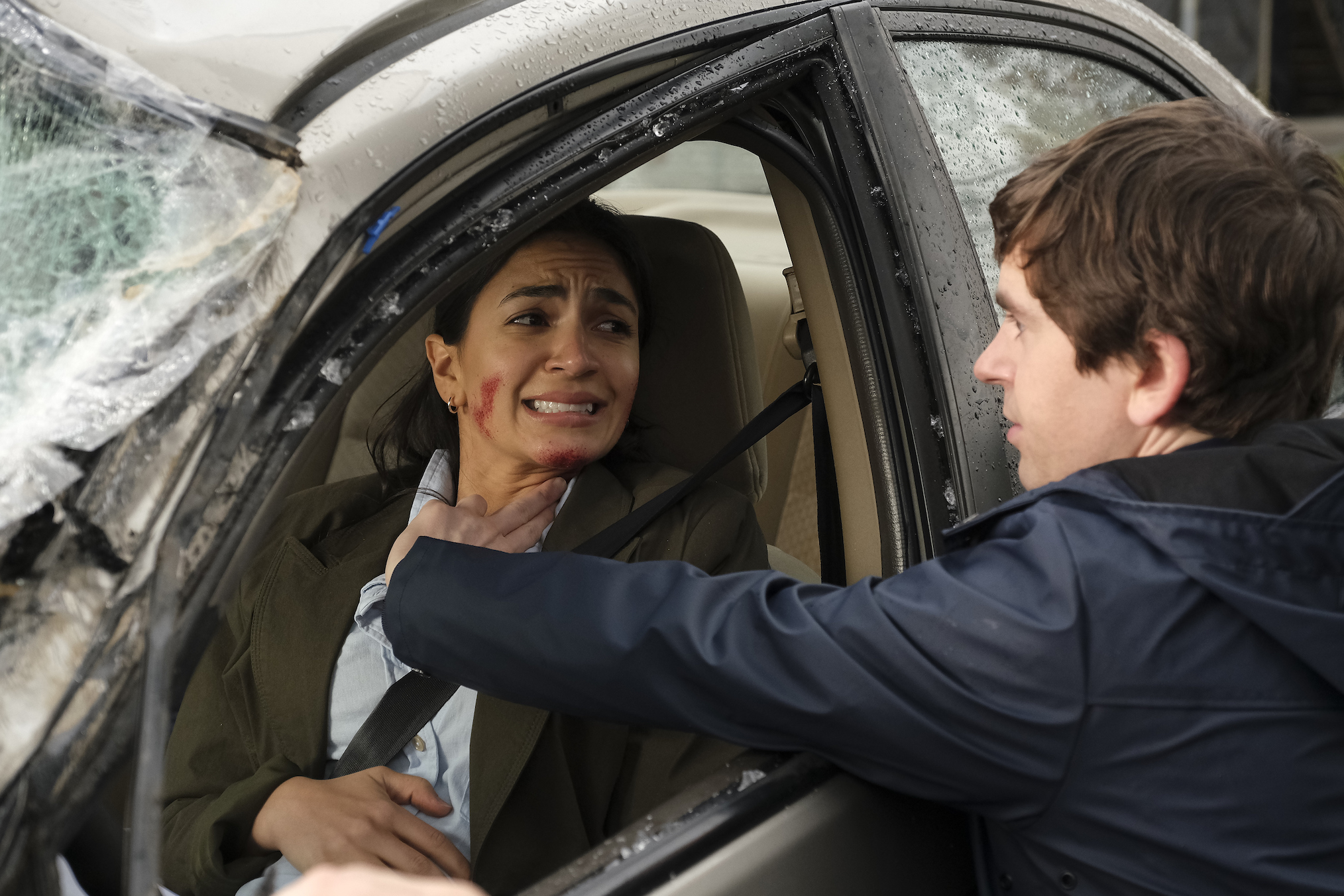 That’s when everything goes wrong. Once out, the baby is in distress, due to, as Shaun determines, a congenital heart defect. But the medication they need doesn’t work because it’s expired — and they don’t have another lot. Shaun comes up with a makeshift solution, but it’s too late, and the baby dies.

Elsewhere in the hospital, Glassman, preparing for his move to Montana (he’s selling his house!), gets a visit from his ex-wife, Ilana (Ann Cusack). Her husband has been diagnosed with Lewy body dementia and is dying … or so they think. Glassman runs tests and sees a lesion. Ilana’s husband has cancer, and while Glassman is reluctant to operate — it’s risky, and he doesn’t want to be the reason she loses someone else she loves after Maddie — his ex-wife talks him into it. (The surgery is a success.)

Ilana also tells Glassman he shouldn’t go to Montana. He looked for change after losing Maddie, she recalls. He still needs Shaun, she tells him. He makes him better. And it looks like Shaun’s going to need Glassman, too, after what happened with Alma and considering where he and Lea stand. Following the heartbreaking loss, Dr. Audrey Lim (Christina Chang) confronts Salen about the expired medication. “This hospital’s priorities, your priorities are upside down and today, that killed someone,” Lim tells her. Salen says she’ll have a grief counselor standing by when Alma wakes, but Lim suggests she call her lawyers, too. But until they’ve held a morbidity and mortality meeting and figured out what changes need to be made, Salen thinks discretion is in everyone’s best interest. In other words, don’t tell Alma her baby died because their meds expired.

Shaun storms into the pharmacy and begins smashing the expired meds. Lea tries to assure him that there was nothing he could’ve done, but “you lied to me! I can’t trust you!” he yells at her. “And I can’t marry you.” Uh-oh.

Glassman tries to calm him next, but Shaun turns on him, too: “You are an awful best man and a terrible mentor. You said you would never abandon me, but that’s a lie. That is a lie! Why is everyone lying to me? You should have been running the hospital. If you had, the baby would not have died.” As Shaun sits on the floor, upset, Glassman joins him and hugs him while Lea can only watch.

Talk about a tough midseason finale! Is Shaun and Lea’s wedding really off? Is Glassman now going to stay (as it looks like he will), or will he still be thinking about moving to Montana? And will Morgan (Fiona Gubelmann) and Park (Will Yun Lee) and Andrews (Hill Harper) and Salen’s double date be the first of many so we get to see it when the ABC medical drama returns?