What to Expect From ‘The Price Is Right’ 50th Anniversary Special

“Come on down!” gets to stay up late for a lively primetime celebration of daytime staple, The Price Is Right‘s 50th anniversary. Since its debut on September 4, 1972, the iconic series has handed out more than $300 million in cash and prizes, including its first-ever auto giveaway, a $2,746 Chevy Vega.

For the big party, The Price Is Right is returning to its roots. “We have a brand-new game that’s really fun called Back to ’72,” says Drew Carey, who just began his 15th year as host. “We have prizes that we had on the show in 1972 when it was still just a half hour, and the contestants have to give us the price within a certain range of the 1972 price.” The special also features memorable moments from the past half century, special guests, high-end prizes, outtakes, and plenty of flashbacks with original host Bob Barker. “He’s always been really nice to me,” continues Carey, praising his beloved predecessor for basically setting him up with a dream gig. “I really am so grateful. I started hosting a No. 1 show thanks to him.”

Over the years, there have obviously been some changes: Prize amounts for the Big Wheel have been bumped up, male models were introduced in 2012 — Carey even recalls being shocked to hear that the show used to buy cars off the lot at sticker price before he came aboard. (The priciest vehicle ever won? A $157,300 Audi R8.) 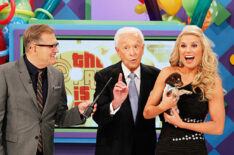 But for the most part, he concedes, the game remains the same. Why has Price’s appeal endured? Some devotees might make a case for the wildly popular game Plinko, which launched four decades ago, but Carey has a more egalitarian theory. “It’s regular people [playing], that’s why. And the viewers are regular people who get to see people they can relate to having a fun day and hopefully winning prizes they wish they could win,” he notes. “Even [prizes] you think aren’t so glamorous, like a new kitchen. I mean, I would like a new kitchen!”