Your favorite middle-schoolers are back and performing in an all-new medium for Pen15‘s special animated episode.

Announced by Hulu, the installment, which serves as an eighth episode for the Emmy-nominated second season is titled “Jacuzzi.” Set to begin streaming Friday, August 27, viewers are getting their first look at the animation style in three new images (above and below) as well as a trailer. 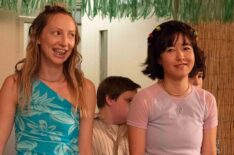 For those not familiar with the original series, Pen15 is described as an R-rated “traumedy” that follows creators Anna Konkle and Maya Erskine as thirteen-year-old versions of themselves in the year 2000. Together, the adult actors portray middle schoolers alongside costars who are actually in their teens. The unique series, seventh grade is an interminable experience for Anna Kone (Konkle) and Maya Ishii-Peters (Erskine). In “Jacuzzi,” the series finds Anna and Maya, on vacation with Anna’s dad Curtis (Taylor Nichols).

While they’re away, the girls are introduced to new crippling insecurities, but while they attempt to ignore their self-doubt, a mystical turn makes it impossible to forget. The installment is written by Konkle and directored by Dan Schimpf and Alex Anfanger. Don’t miss the hilarity which is sure to ensue when this special episode of Pen15 arrives this summer on Hulu. Catch the trailer, below.

PEN15 where to stream