After a 15-season run and two failed spinoffs, a new Supernatural prequel is in the works, and more of the original cast wants in.

News broke yesterday that the show’s latest spinoff series, titled The Winchesters, is in the works and will focus on the story of Sam and Dean Winchester’s parents. The show will be produced by Dean Winchester himself, Jensen Ackles, and his wife Danneel Ackles. 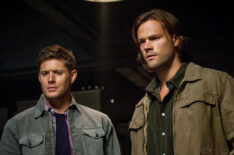 'Wish I heard about this some way other than Twitter,' Padalecki said after the news first broke.

The man behind everyone’s favorite angel Castiel, Misha Collins, threw his hat in the ring on Twitter, saying, “Seems like this show would benefit from a time-traveling angel-in-a-trenchcoat character. Just saying…”

Seems like this show would benefit from a time-traveling angel-in-a-trenchcoat character. Just saying… https://t.co/gb8oxBQZiM

In a show set in the past, Castiel’s time-traveling abilities would justify his appearance. His tweet comes after fellow Winchester brother, Jared Padalecki, stated that he was never contacted about the prequel series.

Dude. Happy for you.
Wish I heard about this some way other than Twitter.
I’m excited to watch, but bummed that Sam Winchester had no involvement whatsoever. https://t.co/bAcEvFKM7p

He followed up by asking fans not to spread any hate towards the show or those involved.

Hey world.
Thank you for the love.
Please PLEASE don’t send any hate or threats.
I care deeply about everybody involved and would be in true misery if any of them were harmed or threatened.

Along with producing, Ackles will reprise his role as Dean to serve as the show’s narrator. “Before Sam and Dean, there was John and Mary. Told from the perspective of narrator Dean Winchester (Jensen Ackles), The Winchesters is the epic, untold love story of how John met Mary and how they put it all on the line to not only save their love, but the entire world,” reads the show’s logline, courtesy of Deadline. If Dean will narrate the series, why not have Sam and Castiel join in?