Every well-established kitchen needs a capable sous-chef or two.

For Fox’s culinary competition series Hell’s Kitchen, that role goes to Christina Wilson and Jason Santos, who lead up the red and blue teams, respectively. Wilson, HK‘s Season 10 winner, is also the VP of Culinary Operations for celebrity chef and show host Gordon Ramsay — and she serves as one of the main motivators for the series’ contestants.

That last role is especially important this year as the fiery series is welcoming a younger bracket into the Las Vegas-set restaurant for its landmark 20th season. Each of the 18 contestants is 23-years-old or younger. “They have such a different, fresh perspective on the world, on food — it’s really neat to see,” Wilson admits. “And quite honestly, as much as we hold their hands through this competition, they were teaching me, Gordon, and Jason some fun new things too, and that was exciting for us.” Ramsay is heading to Portugal, Croatia, Mexico, Texas, and other places to check out global cuisines.

Below, Wilson dishes on the drama ahead — and check out an exclusive video from the season premiere below.

This season of Hell’s Kitchen focuses on a younger age bracket. What differences have you noticed in working with these less-seasoned chefs?

Christina Wilson: Well, I had a vegan and a vegetarian [on my team] so it was really interesting to watch how those ladies got clever and really leaned on each other to taste things that they’d normally choose not to eat and there’s some really impressive and creative vegan and vegetarian dishes coming out. So, I think you’ll be surprised. I know Gordon certainly was.

In the premiere, you get to sit down with the red team competitors and a few other past winners. Because your group is younger than usual, do you feel more pressure to be a role model for these competitors?

I don’t feel like I have any more pressure in how I carry myself or how I act. We all — and you’ll see a different side of Gordon also — have to have more patience because they’re so young. We still hold them to the same standards, but we are helping to get them where we need them to be, where the expectations with the older, more seasoned chefs in seasons pasts, we expect a little bit more out of them performance-wise. These kids are like baby deer right now — they don’t even know how to walk straight on their legs yet. But there’s a ton of talent across the season this year.

Hell’s Kitchen is intense no matter where you’re at in your career. The good thing though, is these guys are all fresh-faced, eager. They look at the world with such a different perspective. I’ve been lucky to be a sous-chef for five seasons now, and this is the first time that I really feel that generational gap. It was a really interesting learning curve for us too. What’s the biggest piece of advice that you dish out for women in the food industry?

It’s so much about showing up and giving your best effort every day. I know that sounds so simple, but it’s such a big piece of it.

Can you tease the grossest or worst punishment that we’ll see this season?

There may be some special Gordon-prepared lunches for them in milkshake form. [Laughs] There’s a couple of good [punishments] in there. We probably have too much fun finding the ingredients for those milkshakes for the losing teams, but it’s all part of the journey for them.

Does Gordon have any tricks up his sleeve for this particular landmark season of Hell’s Kitchen?

Just like Season 19, this one is set in Las Vegas, so just imagine the opportunities there are for a young 20-something-year-old to get a little squirrely on the strip, even during the competition. And Gordon sees everything. There are some really fun [moments] throughout the season, that’s all I’ll say. So much of your role is behind the scenes when the main onscreen action and drama is between the contestants and Gordon. What’s something you’re always doing on Hell’s Kitchen that viewers might not know about or understand?

We are always with the contestants. We do so much work with the contestants in the kitchen, when we’re prepping for the dinner service, when we’re working with whoever lost — the punishment will often involve some type of food — so we’re around them, mentoring them every single chance that we get, and we’re constantly supporting the prep for dinner service. We have a little tiny kitchen, you can’t really see it. I wouldn’t even really call it a kitchen — it’s a table with some equipment on it. But we try to stay ahead of prep because we have so many reservations in the book every night, and we never know how many times they’re going to mess up the salmon, or Gordon’s going to punch [the meat], so if you don’t see us, we’re usually mentoring the contestants or we’re helping them stay ahead of prep for that night’s dinner service.

It’s been 10 seasons since you won Hell’s Kitchen. What’s the biggest difference this show has brought to your life?

Everything. I had a successful and very modest career in Philadelphia before I came on this show. I’ve been with Gordon since I walked through the doors as a contestant. I’ve never left. I’ve gotten to help double his U.S. portfolio, travel to places I’ve never been to see restaurant openings. I’ve had so much opportunity on the back of this amazing platform that Hell’s Kitchen gave me. Even my biggest dreams weren’t big enough.

Check out an exclusive clip of Hell’s Kitchen: Young Guns‘ season premiere below. 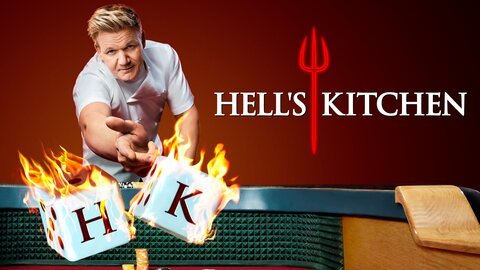 Hell's Kitchen where to stream