Huffman was arrested at gunpoint

According to TMZ, the Desperate Housewives alum was arrested at the Hollywood Hills home she shares with husband William H. Macy early on Tuesday morning by seven FBI agents with guns drawn. A source told the site the guns were drawn as a precaution.
Stefanie Keenan/Getty Images for FIJI Water

The $15,000 that Huffman allegedly paid to have a proctor change her daughter’s SAT answers was disguised as a charitable donation to provide “educational and self-enrichment programs to disadvantaged youth,” according to Slate.
Rebecca Sapp/Getty Images for Backstage Creations

The actress, concerned over who would proctor SAT proctor, emailed her alleged fixer a Scooby-Doo catchphrase, according to an affidavit cited by BuzzFeed News: “Ruh Ro! Looks like [my daughter’s high school] wants to provide its own proctor.”
Axelle/Bauer-Griffin/FilmMagic

“[Daughter Sofia] is going to go to college. … We’re right now in the thick of college application time, which is so stressful,” the Shameless star told Parade in January.
Matt Petit/ABC via Getty Images

David Mamet (at right in the above photo with Huffman, at left), an acclaimed playwright and the creator of The Unit, wrote an open letter to defend Huffman and Macy’s character, after being friends and working with the couple for decades. “The unqualified may be accepted [into college] for many reasons, among them, as Legacies, and on account of large donations made by their parents,” he wrote. “I do not see the difference between getting a kid into school by bribing the Building Committee, and by bribing someone else. But, apparently, the second is against the Law. So be it. … That a parent’s zeal for her children’s future may have overcome her better judgment for a moment is not only unfortunate, it is, I know we parents would agree, a universal phenomenon.”
Instagram

“I don’t know how much of school I’m gonna attend, but I’m gonna go in and talk to my deans and everyone, and hope that I can try and balance it all,” Loughlin’s daughter Olivia said in an August 2018 YouTube video. “But I do want the experience of like game days, partying … I don’t really care about school, as you guys all know.” (She later apologized.)
Instagram

Olivia also claimed her dad “faked his way” through college

Days before dad Mossimo Giannulli’s arrest for his alleged involvement in the scam, Olivia claimed he had his own college ploy. “He has a really crazy story in college,” the 19-year-old said on the Zach Sang Show on March 8. “He, like, built his whole entire brand and he wasn’t actually, like, ever … enrolled in college. … But he, like, faked his way through it and then he started his whole business with tuition money that his parents thought [was] going to college. That’s, like, such a different time. I don’t know if I was supposed to say that, but it’s OK.”
ABC Photo Archives/ABC via Getty Images

Loughlin participated in a preschool scam storyline on Full House

In the Season 6 episode “Be True to Your Preschool,” Loughlin’s Becky Katsopolis chastises her husband, John Stamos’ Jesse Katsopolis, about his plan to lie to get his twins into a prestigious preschool.
Gary Gershoff/Getty Images

Loughlin seemed relieved it was the IRS was looking into the alleged scam, not USC

“It’s the IRS. It’s not anyone from USC, it’s the IRS,” the actress allegedly confirmed in a conversation the fixer, per Vice. “Okay. Very good.”
LISA O'CONNOR,TOMMASO BODDI/AFP/Getty Images

Celebrities are slamming both Loughlin and Huffman

“2019 is about us witnessing how privileged, unethical people get themselves out of more jail time and their children into elite universities,” tweeted George Takei. Kirstie Alley wrote, “The part of the college fraud thing that's most disturbing to me was paying someone else take to take SATs for their kid. What does this message send? You are too stupid to get a high SAT score? Ugly.” And Olivia Munn tweeted, “The irony will be that these parents spent all this money to hustle into top universities and are now in the middle of this shit show just to find out in a few years that their kids only have dreams of being an influencer.”

It's the story that's rocked Hollywood!

On Tuesday, March 13, Felicity Huffman and Lori Loughlin were indicted in Operation Varsity Blues, an investigation into a nationwide college admissions scam involving the alleged faking of students’ SAT and ACT scores and athletic achievements. And by now, more startling and bizarre details have emerged in the press.

Click through the gallery above to read these wild developments from the scandal. 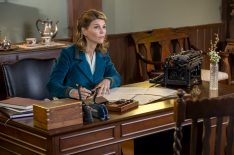 The star will no longer star on the Hallmark period drama 'When Calls the Heart' or the film series 'Garage Sale Mysteries.'