Bucky Barnes (Sebastian Stan), the WWII vet and formerly brainwashed assassin, has been through the ringer, and his turmoil continues in Marvel’s Disney+ series The Falcon and The Winter Soldier.

But he’s getting help, including from his court-appointed therapist Dr. Raynor, played by Bosch‘s Amy Aquino. A former soldier herself, she knows what it’s like to suffer from trauma and PTSD, which leads to a no-holds-barred approach during sessions. Along with helping Bucky make amends to those he harmed as the Winter Soldier, Dr. Raynor’s also using his connection with Sam Wilson (Anthony Mackie) to help him heal. These two have had plenty of ups and downs before 'Falcon and the Winter Soldier.'

Below, Aquino talks to TV Insider about filming Episode 2’s memorably intense — and very funny — court-ordered therapy session with Stan and Mackie, teases what we’ll learn about Raynor’s own connection to the new Captain America, John Walker (Wyatt Russell), and much more.

What drew you to the role of Dr. Raynor?

Amy Aquino: It fired on all eight cylinders for me. She’s smart. She’s tough. She’s funny. She’s got her own baggage having been a soldier herself. She’s got the relationship with John Walker that nobody knows about until the therapy’s mostly over. So I just went, “Yeah, this is great.” And it’s Marvel. I never really saw the movies, but I knew it was this gigantic thing, and so many people just adore them. It was a perfect combination. Dr. Raynor is very blunt with Bucky. Is that because of having been a soldier or because it’s the best method with which to engage him?

It’s her special thing. She does primarily deal with PTSD, so she’s primarily dealing with soldiers. And because she’s been through it herself, she doesn’t feel like she has to tip toe around it. I mean, [Bucky] says, “You’re a terrible therapist,” and he may be right. She doesn’t deny it, she said, “Yeah, OK, maybe. But I was a great soldier.” She knows that what she’s doing is a life or death job because so many veterans end up killing themselves or dying from drug abuse. This is a situation where she’s not going to let this happen. She wants to save this guy’s life.

She is invested in a way that is maybe not completely professional. But I loved it because this is who she is. She brings herself to it. She’s unapologetic. And she’s got the credibility. It’s like, “Yeah, I’m tough because I’ve been there.” 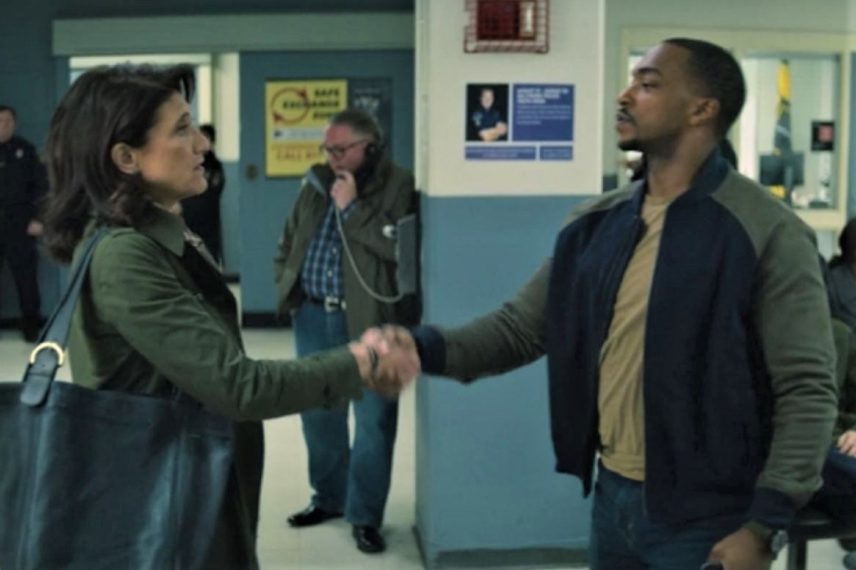 Viewers are really into Sam and Bucky’s joint therapy session, which is both really funny, given their antagonistic dynamic, and intense in that Raynor has them do couples therapy techniques, such as soul gazing. What goes into a scene that needs to be both funny and heartbreaking?

Well, we hadn’t met before that day because I flew to Atlanta the night before. I didn’t have that history with them. So on some level, it was me watching and being as amazed by this vaudeville [act] that was going on. If we had a longer history of working together, it might’ve been completely impossible for me to sit there straight-faced. But no, I just got to sit and take it in and say, “Oh my God, oh my God.” Which is not that far away from what Raynor was really thinking as well. She just doesn’t go there. They’re completely adorable together. The chemistry is amazing. And they’re both incredibly funny, sweet, crazy guys.

Does she pull Sam into Bucky’s session because she sees him as a lifeline?

Absolutely. Dr. Raynor sees Sam as the one possible chink in his armor because he knew him before, and they have this shared love for Captain America. Whatever the relationship, there’s something there. Sam is trying to reach him and he’s not calling back. There’s something very significant here. So it’s maybe the one way that Raynor can get to Bucky, and this is her last chance to do it. She’s certainly not going to throw away her shot when she has the two of them sitting there. She feels like if they can at least open themselves up a tiny, tiny bit then during the course of working together…it’s like when you get a little nick in your windshield and then it grows and grows, and then over time it will naturally spread out and he can open up. So, it’s also revealed that Raynor knows John Walker. Will we learn more about her past and the connection?

I hope so, too! So, when Walker orders Bucky’s therapy sessions to stop, did he make the right choice? How does Raynor feel about this?

Well, I think what helps Raynor is the fact that she’s a soldier and she’s been in the military. So she understands chain of command. Even though in this case she’s Bucky’s therapist, [John]’s the boss of this. So you don’t buck against it. You just make the best of it. She doesn’t question him. If these guys need to be out and there’s a world to be saved, then there’s a world to be saved. So let me deal with what I’ve got.