Married at First Sight‘s 12th season has had its ups and downs, and it appears as though party girl Virginia and stubborn pilot Erik are headed for rough terrain.

In an exclusive sneak peek clip for the show’s March 17th episode, “Third Week’s a Charm,” the pair meet with relationship and series expert Dr. Viviana to discuss various topics, and things get heated when it comes to kids and religion. 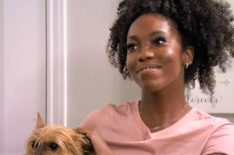 While age difference has been a challenge for 26-year-old Virginia and her 34-year-old hubby, it may be more than a mere age gap causing a problem. “You’re bringing something to the table he’s never had, and he’s doing the same to you,” Dr. Viviana reminds the pair.

“It really does make you have to be introspective and think about, ‘What do I gain from opening my mind or being more accepting to something that maybe I wasn’t in the past?'” she continues. Erik isn’t so accepting or flexible though when it comes to the topic of kids. “I know what I believe in and that’s it,” he says in terms of religion. And he’s seemingly immovable on the subject of kids. “I don’t even know if she wants kids…I mean, that’s one thing she’s half and half on. If she doesn’t want them, I’m done.” See how Virginia responds to Erik in the sneak peek clip, above.