One of 9-1-1‘s families you love so much may lose one of its own. In the March 8 winter finale, firefighter and paramedic Hen (Aisha Hinds) and her wife, rocket scientist Karen (Tracie Thoms), find out they have to give Nia, the young girl they’ve been fostering, back to her mother. 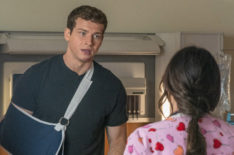 Elsewhere in the hour, firefighter Buck (Oliver Stark) invites reporter Taylor (Megan West) to the most awkward double date — she didn’t even know anyone else would be there — with his roommate Albert (John Harlan Kim) and his girlfriend Veronica (Keana Marie) … whom we met on an awful date with Buck. (Albert and Veronica hooked up later on.)

Showrunner Tim Minear gives us the scoop on what’s next for the 118, on and off the job.

How is losing Nia going to affect Hen and Karen’s family moving forward?

Tim Minear: They’ve become very attached to that little girl. It’s going to rock their world in a pretty significant way, but Hen and Karen understand the risks of being foster parents and it’s not going to dim their resolve to continue doing that sort of thing. Doesn’t Nia need her own spinoff?

Buck’s attempt to start dating again has not been going well, but Taylor is back in his life. How much more are we going to see of her?

You’ll definitely see more of Taylor. She has a certain insight into Buck. What’s great for Buck about Taylor is she keeps him on his toes and she’s a formidable woman. We’re going to see a real friendship developing and possibly more. What drama lies ahead in the 118’s relationships?

Bobby [Peter Krause] and Athena’s [Angela Bassett] relationship is brought to a bit of a straining point as Bobby feels like Athena is such a go-it-alone kind of gal that he starts to question his place in this relationship.

Then look for a significant source of agitation for the entire 118.

Maddie’s [Jennifer Love Hewitt] getting closer to giving birth. When are we going to meet the baby? Will something happen that requires the 118 when she goes into labor?

Her labor certainly won’t be conventional. That’s not how we roll on 9-1-1. We’ll be meeting that little girl very soon, actually, and anybody would love to have Maddie and Chimney [Kenneth Choi] as their parents. Given all the parental drama both of them have had with their own parents, they’re really determined to make this work for their kid. I don’t think anybody deserves happiness more than Maddie and Chimney. How much is COVID going to continue to be a factor in the 9-1-1 world? They were giving out vaccines in this episode.

We’re still following what’s happening in the real world, but now that vaccines are available to first responders and more people in the public, hopefully we’ll be able to pull away from some of that and hopefully the world will, too. We’re aspirational in that way.

When are we getting more from Bobby, [Athena’s ex-husband] Michael [Rockmond Dunbar], and [Michael’s boyfriend] David’s [La Monde Byrd] misadventures, with a special appearance by a disapproving Athena?

Very soon. I can’t get enough of misadventures of Michael and Bobby. I just think that Peter Krause was so hilarious in the Rear Window story that we’ve got something up our sleeve to continue in that vein. But as is most things with 9-1-1, something that could start off light-hearted and hilarious could end up being quite emotional and turn on a dime. What big character stories are you most looking forward to fans seeing when 9-1-1 returns?

I’m very excited about what we’re driving at for the finale for the last part of this season. One of our characters will be in some very serious jeopardy. … Questions will be answered. It doesn’t mean that the after-effects won’t resonate into another season, they certainly will. If you think about how we ended Season 2 will Buck being smashed by that firetruck, we knew he was going to survive that, we just didn’t know what that meant for him going forward. I would expect something similar here.