TV Insider’s Poll Results Are in — Did ‘Jeopardy!’ Guest Host Ken Jennings Get the Thumb’s Up?

It’s been almost a month since Jeopardy!‘s been on air without the late Alex Trebek, who will forever be missed. But it does seem as if the show’s first guest host, Ken Jennings, is making quite the good impression. 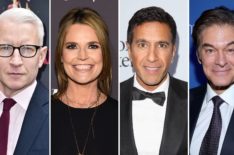 The list keeps growing as the show looks to replace the late Alex Trebek.

Taking the helm on January 11, Jennings has moved smoothly into the temporary role, trading in the contestant buzzer for cue cards. (Other guest hosts on the horizon include Katie Couric, Mayim Bialik, and Anderson Cooper.)

After Jenning’s had two weeks under his belt, we asked our readers to vote in a poll that rates the job he’s doing with the hosting gig. And it seems like a win! As of the time of this posting, almost 11,000 poll participants voted “Good! He’s fitting in well.” Let us know what you think of Jennings’ performance so far in the comments below, and don’t miss the upcoming guest hosts when they arrive later this season.