Supernatural: The Long Road Home (8/7c, The CW): You’ll laugh, you’ll cry, you may even scream as Supernatural‘s legion of fans hop aboard “Baby” for a fond trip down memory lane to celebrate the past 15 seasons of the impressively long-running horror show. Turns out it was more of a love fest, especially between the guys playing the Brothers Winchester, Jensen Ackles (Dean) and Jared Padalecki (Sam), and honorary “third brother,” the angel Castiel (Misha Collins). Producers and key recurring guest stars also weigh in on the fun that was had along the torturous route of saving the world from demons and apocalypse. Followed by the series finale (9/8c), titled “Carry On,” which we imagine the Winchesters will continue to do — at least in our memories. 'Supernatural' Series Finale: One Last Hunt for the Winchesters? (PHOTOS)

Plus, take a look behind the scenes with Jared Padalecki and Jensen Ackles.

A Million Little Things (10/9c, ABC): Will things never get easier for this fellowship of Boston buddies? The third season begins in the immediate aftermath of Eddie (David Giuntoli) being struck by a car as he’s preparing to head home to renew vows with Katherine (Grace Park). As we’ve heard Rome (Romany Malco) say in the promos, “I can’t afford to lose anyone else tonight.” (He’s still reeling from the adoption that didn’t go through.) Across the pond, Maggie (Allison Miller) has a rough landing upon arriving in Oxford, but by comparison, that’s comic relief. The Fresh Prince of Bel-Air Reunion (streaming on HBO Max): Unlike the streamer’s recent West Wing reunion, this isn’t an attempt to recreate the magic by performing a vintage episode. This is straight-up hugs and memories, as Will Smith convenes a loving rap session for the cast of his hit 1990s sitcom, taped on the 30th anniversary of the Fresh Prince premiere on NBC. Among those reminiscing on the set of the Banks home: Tatyana Ali, Karyn Parsons, Joseph Marcell, Daphne Maxwell Reid and — doing “the Carlton” — Alfonso Ribeiro. Smith even brings back the original Aunt Viv, Janet Hubert, for an emotional conversation. And all have good things to say about the late James Avery, who played Will’s father figure, Philip Banks. 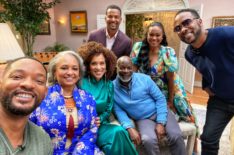 The premiere date is set as Smith teasingly warns, 'You're not ready for this trailer,' which includes a major clearing of the air with Janet Hubert.

I Hate Suzie (streaming on HBO Max): Haters gonna hate, but those with a taste for brutal show-biz satire are likely to dig this eight-part dark comedy about the sour side of celebrity. Doctor Who and Penny Dreadful veteran Billie Piper plays Suzie Pickles, a character molded after her own history (former U.K. pop star, cult sci-fi icon). Suzie’s in quite the pickle when her phone is hacked and sexy photos leaked, turning her home life and career into a shambles. Whatever will Disney, about to offer her a life-changing role as a mature princess, make of poor Suzie, as she spirals from self-pity to self-disgust. You may not know whether to life or cry at her predicament. Neither does she. Billie Piper ('Doctor Who') stars as a former pop star whose TV career and family life blows up after a phone-hacking scandal.

Grey’s Anatomy (9/8c, ABC): Still reeling from the Derek dream shocker? Look for more of the same, as (quoting from ABC’s program listing) “The Grey Sloan doctors continue to face their new COVID-19 reality and deal with a familiar and stubborn patient.” We assume that’s Meredith (Ellen Pompeo), last seen collapsed in the parking lot after another soul-crushing day of pandemic trauma, lost in a fugue state where she’s reunited on a beach with the lost love of her life, Derek (Patrick Dempsey). In other news, the boorish and recently demoted Koracick (Greg Germann) is put in charge of the new class of interns. That’s likely to be its own disaster. 'Grey's Anatomy': Patrick Dempsey Teases McDreamy Will Be Back 'Throughout the Season'

The actor says viewers have not yet seen the last of Derek.

Inside Thursday TV: Streamer UMC (Urban Movie Channel) premieres For the Love of Jason, a romantic comedy series told from a 30-year-old bachelor’s (Trell Woodberry) perspective… More rom-com fun in the Netflix movie sequel The Princess Switch: Switched Again, where Vanessa Hudgens now does triple duty: as Duchess Margaret, Princess Stacy of Belgravia and a third doppelganger: scheming party girl Fiona, who throws all of their romantic intrigues into disarray… Univision presents The 21st Annual Latin Grammys (8/7c) from Miami, with performances piped in virtually from around the world… Bonnie (Allison Janney) encounters an old flame (Steve Valentine) on CBS’s Mom (9/8c). How will Adam (William Fichtner) react — or will he too distracted by Tammy (Kristen Johnston) remodeling the kitchen to make it more wheelchair accessible?… Wade (Walton Goggins), aka CBS’s The Unicorn (9:30/8:30c), goes on his first date with Shannon (Natalie Zea), but her unusual lifestyle will take some getting used to.