Ken Jennings on His New ‘Jeopardy!’ Role & What It’s Really Like Working With Alex Trebek

Ken Jennings is a name that’s now nearly as synonymous with Jeopardy! as host Alex Trebek‘s is as the multi-winner continues to hold his title as the show’s “Greatest of All Time” player.

First arriving on people’s screens in 2004, Jennings wowed viewers with his impressive winning streak and has resurfaced numerous times for the quiz game show in the years since his first successful run. Earlier this year in 2020, Jennings was crowned the GOAT player of Jeopardy! after a weeklong tournament on primetime TV as he went head-to-head with other strong competitors Brad Rutter and James Holzhauer. And do you remember that time Alex Trebek didn't wear pants?

Jennings, who has recently partnered with Tracfone Wireless, jokes, “The thing about kind of being a public TV smarty pants is you get associated with smart brands, which is fun. So, I did a series of ads for Tracfone where I talk about stuff like philosophy and quantum physics. But, I also talk about prepaid cell phone plans, about how you can get unlimited carryover data, and how you can keep your own phone and this amazing LTE network”

“It’s a fun little side gig to be a bit of a TV footnote for now,” he adds. While he may be teaming with Tracfone, Jennings is also delving into his Season 37 role as goodwill ambassador and consultant to Jeopardy!. Below, the former contestant gets candid about being named the Jeopardy! GOAT, his new role on the show and what it’s really like working with Alex Trebek. How did your new role in the show come about and what is it like working behind the scenes?

Ken Jennings: It really surprised me. I had thought I was retired from the game. I was feeling my age a little bit. I knew I wasn’t going to be able to top that GOAT tournament from earlier. So, I thought, “This is perfect. I can bow out of Jeopardy! in a graceful way and not be the shortstop that keeps playing too long.” But, the day the last game of the tournament aired, I got a call from the Jeopardy! executive producer and he said, “Hey, in 20 years on the show, I’ve never called a contestant before. But, we’ve been talking and if you’re actually retired, would you want to come work for the show?”

I didn’t have to think for a second because the only sad thing about retiring from Jeopardy would be not being part of my favorite show anymore. That’s the thing about Jeopardy. It’s kind of in the fabric of our lives. They have good memories of watching it. People plan their evenings around it. And I knew I would miss that, so I said, “Yes, in a heartbeat.” 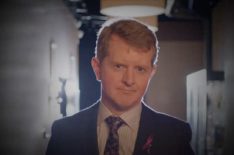 The GOAT competitor is returning to the series in a new position.

It’s a really great gig, being a goodwill ambassador for a show that already has so much goodwill, it’s not a tough lift at all. Because of the pandemic, I’m mostly working remotely from Seattle, where I live. Just consulting on clues [contestants] and game board material. I show up myself on the game board sometimes, reading clues. I just love that I’m still part of the Jeopardy! world. I really would’ve missed it.

Will you miss the rush of playing the game yourself?

Maybe everyone in the world plays along with Jeopardy!, except for me. I might be the only one. If you’re on that show 70 whatever times, I got to say, when you hear that music or you’re in a bar, and you hear Trebek’s voice on the TV, it’s not a relaxing feeling anymore. You kind of feel like, “Oh, shoot, I’m back at work.” Jeopardy! was one of the first shows to get back to work amid the ongoing pandemic. How does it feel to be a part of this “comfort food” show at such a crucial time in history?

I think it’s fantastic. You’re absolutely right that people want comfort food. In our house, we’re watching a lot of M*A*S*H reruns during the pandemic. And for a lot of people, that’s Jeopardy!. The show is very aware of how important it is as an institution and not just as a game show or an entertainment property anymore. They take that legacy very seriously. I was very touched a month ago when new episodes started airing again. They had to take a slightly longer than usual summer hiatus because the pandemic had shut down them being in L.A.

So, for the show to be back with new episodes, you probably remember the collective sigh of relief from viewers and media. I would do all these interviews where people were just so absurdly grateful that Jeopardy! was going to be on. I totally get it. That was my childhood too. I am a longtime fan of the show.

'We're all lucky to work with a living legend who's also a great guy,' exec producer Mike Richards says.

How does it feel to be Jeopardy!‘s first and only GOAT (Greatest of All Time) player?

Isn’t that crazy that’s probably going to turn out to be the big TV story of 2020 is a week of Jeopardy in prime time? I guess if there’s any nice thing that happened this year, it might be that. I was very nervous going in [to the tournament]. I was convinced that I really couldn’t win that against two players of that caliber. I’d never beaten Brad [Rutter]. James [Holzhauer], watching from home, just seemed unstoppable. I thought I was a little past my prime.

So, to actually catch a few breaks and play just well enough to squeak out that win, as much luck as skill. I really felt like I had dodged a bullet. It was so surreal, I couldn’t believe it. Something that nice happening. But, I got to hand it to those two, Brad or James easily could have won that being on a different set of nights. It’s all just… Yeah, who has their buzzer mojo kind of exactly locked in on a given week, and who gets the categories they need. … There’s a lot of luck in the game of Jeopardy! and I just squeaked one out. But, that was just one of the greatest highlights of my life. I mean, I’m married with two kids, so I don’t want to say it was better than my wedding day or the birth of my children. But, boy, is it up there.

The banter between you and Alex Trebek has become a fan favorite over the years. Is it the same behind the scenes?

So, you get to see him in little snatches over your time on the show. And over the years, I’ve kind of gotten a sense of who he is. He’s exactly the guy we all want him to be from TV, not just the cool old-school broadcaster, but the reliably good authoritative person. He’s also a little bit goofier than you’d think. Between rounds, he’ll take audience questions and he’s cracking jokes that are self-deprecating. He swears. He does accents. I’ve seen him do little bits of song and dance. He’s really much more the goofy uncle than the stern dad, and I think America doesn’t always see that because there’s not a lot of time for him to make wisecracks.

Are you watching anything good right now besides Jeopardy!?

Sure. It’s not really a comfort food, it’s about the end of the world. But, I caught up with Umbrella Academy on Netflix and I liked that a lot. I’m a big Gerard Way fan. Right now I’m working on a book. My next book is about the afterlife, different versions of the afterlife, from Dante’s Inferno to ancient Egypt to Coco or whatever. So, I’ve been binging The Good Place lately and to put together a four-season sitcom about ethics, I think, is a really tall order, especially in 2020. And I’m having a fantastic time rewatching. I don’t want to ask if you’d ever host the show in the future, but if there was ever an opportunity to make your role on the show more substantial, would you?

Yeah, you’re absolutely right. That’s a tricky question, not just for interviewers, but for fans and the show itself, because Alex is going to retire at some point. Hopefully, it’s many years away. And hopefully, he’s hale and hearty when he does so. It’s really hard for me to answer that question because it requires envisioning a version of Jeopardy! without Alex Trebek. As great as that job would be, I am not emotionally prepared to do that right now. I have one host of Jeopardy! in my heart. So, I hope Alex is doing well.