“The Prince” reclaimed his throne in WWE on Tuesday night. Finn Bálor captured the vacant NXT championship against Adam Cole in a surefire classic. For the Irish superstar, it was an accomplishment he enjoys after returning to the brand almost a year ago. The 39-year-old now rules the NXT kingdom but remains motivated to put in the work.

“The objective coming back to NXT was not necessarily the title,” he said. “I wanted to push myself to the limit every single night. I feel like the only place I could do it right now was being in NXT. Being in the ring with who I consider the greatest talent in the world. Whether it’s [Johnny] Gargano or [Tommaso] Ciampa, Damian Priest, and of course, Adam Cole last night. When you’re performing on that level night in and night out, opportunities arise.

“The opportunity arose for the iron man match last week in an unexpected circumstance after Karrion Kross getting injured. [The title] wasn’t necessarily something on my radar two weeks ago. Karrion’s injury was something I had a lot of sympathy for, having gone through something similar. It was four NXT champions working to pick up the pieces. We went at it for an hour. It was hell. Without a decided winner, a week later, me and Adam went at it last night. It was fun. I came out as champ.”

Bálor is proud to have two NXT title reigns, separated by four-and-a-half years, something the popular performer finds rare considering the current landscape of pro wrestling. “I feel very fortunate to have been given that opportunity,” the champ adds. “I’m excited to where it goes from here because you never really know what’s going to happen in this crazy world.”

Here, Bálor checks in from home to reflect on the memorable year he has had.

Is there anything you did to celebrate the title win?

Finn Bálor: I came home. My wife had cooked me a delicious steak, and we watched a few episodes of Money Heist, a TV show I’m watching right now. I got a little bit of sleep. There hasn’t been much celebrating.

We saw Triple H congratulate you backstage after the match and the social media post that followed. How would you describe your working relationship?

Working with him has been absolutely fantastic. I came to WWE about six years ago with a lot of uncertainty. There were expectations, but personally, I was uncertain how it was going to go. I feel like myself and Triple H struck an understanding early on in my career at NXT. It has grown and developed. He is someone I can say I’ve spent in and out of the ring more than anyone else. I trust his direction and take his advice. He’s someone I feel very fortunate to have developed a friendship with the last couple of years. 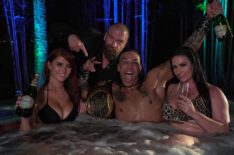 Maybe I’ve proven myself to him as someone he can trust to get something done. We have a good bond. Having gone through what he has in building NXT and the brand, hopefully, I won’t let him down by continuing to build the brand and perform at the highest level.

How do you approach matches in this kind of environment?

It’s very hard to get a scope of what people like or don’t like because there is no instant gratification. There is no roar of the crowd. The crowd at NXT and any wrestling show is very vocal. You know if something is bad because they are going to tell you. Not having that barometer makes it very difficult. The reason I wanted to come back to NXT is I’ve kind of slipped into a habit of trying to please too many different people and not please myself. I wanted to go back to what made me feel happy and to what I felt comfortable with and confident with and wanted to try. The world gets hit by pandemic and coronavirus where we’re performing in empty arenas. Now it ups that ante again because without that instant gratification of the fans, we have to do this without outside influences. You go out there knowing there are millions of people watching. They can see what you’re doing. It’s a very new experience when you don’t understand how many people are watching and invested and upset and happy. It’s even harder to gauge all this with no fans there. It has been a learning experience the last couple of months, but I feel like we’re going to come out of this for the better. I feel the company has adapted to this terrible time in the world to continue to produce TV and put out content. It’s something we’ve adapted to and learned from. We’re all going to be better going forward.

Karrion Kross won the NXT title at TakeOver only to drop it days later due to injury. You had to do the same thing as the first Universal champion after SummerSlam in 2016. Have you had conversations with him about how to weather this storm?

When I heard the news about what happened to Karrion Kross, I had so much sympathy for his situation. It was almost an identical scenario we’ve been through. We’ve had conversations and discussed how it will affect you and can affect you. I’ve shown you can come back. I think a lot of people think giving up the title is the hardest part. That’s not necessarily the fact because at that point when you’re hurt and can’t perform, the focus is on getting healthy. The hardest part for me was when you get healthy and all the doctors tell you you’re cleared. There is the self-doubt of thinking, “Am I good enough now? Can I still perform? Will I be as good as I used to be? Will the people want to see me?” There are all these internal questions you ask yourself when you’re about to come back. That was the hardest moment for me. We’ve discussed that. He has to learn from this experience and come back stronger than ever and better than ever and more mentally focused. As the NXT champion, that’s the match I want. I was in his situation where I had to relinquish the title and wanted a match. He should want this match. I want him to have this match. I feel he needs to beat me to reclaim his championship. I need to beat him to claim that I am the champ. That’s the match we need to get to.

You recently enjoyed your first wedding anniversary. Has the time at home affected your perspective when it comes to the balance of family and work?

Being stuck in a sense at home with your wife is not a terrible situation. We feel very fortunate that we have been given this opportunity to spend so much time together. From a personal level, my wife is Mexican, and I’m Irish. We haven’t been able to see our respective families in Mexico and Ireland in months. There are pluses and negatives. Being off the road has helped a lot of wrestlers in regard to their physical state and conditioning. Taking some of the pain of being on the road and traveling all the time, we kind of get used to it. It becomes a habit and way of life. I think a lot of us are eager to get back on the road and perform in front of the fans. We want and need that buzz because what it comes down to is every wrestler is addicted to that moment walking through the curtain. We want that reaction, negative or positive. There are benefits in healing injuries and taking time off the road, but there are also negatives of performing for the fans and not seeing family abroad. It’s a tough time for everyone, but the company and talent is adapting to it. Hopefully, in the future we’ll be back to normal.

You’ve got to work with new opponents during this run in NXT. Is there one you can point out who you see as a future champion?

I don’t know what other people see or look at, but for me, locking up with Timothy Thatcher was one of my favorites. He is someone who has it all in the ring and pushes me to my limits technically. His work ethic in and out of the ring is exceptional. He has all the tools mentally and physically to take it to the next level. He pushed me in the ring and is someone I admire out of the ring. He has a bright future.