The View is back for its 24th season next week, and ABC has unveiled plans for its first month.

The Daytime Emmy Award-winning ABC talk show returns live on Tuesday, September 8, with Sara Haines back in her co-host seat alongside Whoopi Goldberg, Joy Behar, Sunny Hostin, and Meghan McCain. She was previously on the panel in 2016-2018 (Seasons 20 and 21) and recently co-hosted the now-canceledGMA 3: Strahan, Sara & Keke with Michael Strahan and Keke Palmer.

“I grew up watching The View, and what this show stands for — different women, different backgrounds and different points of view — just speaks to my soul,” Haines said in a statement. “I feel like I caught a shooting star twice. To once again be a part of the dialogue where I can share, discuss and disagree alongside these powerful and strong women is a tremendous honor. I feel very lucky.”

“Sara never stopped being a part of The View family and we’re so excited to once again have her warmth, humor and thoughtful viewpoint join the rest of our talented co-hosts on the panel,” executive producer Brian Teta added. Meanwhile, McCain announced last season that she and her husband, Ben Domenech, are expecting their first child, and Teta told Deadline that after McCain’s maternity leave begins, there will be “a lot of good guests on the show and maybe a couple of surprise guest hosts” as they ensure they “have every viewpoint accounted for, including the conservative side,” instead of replacing her.

Looking ahead at the new season and what to expect, “The View is at the intersection of politics, the pandemic and the racial justice movement, and our hot topics reflect the national conversation which gives us a unique position in daytime,” senior executive producer Hilary Estey McLoughlin said in a statement. “The election is our Super Bowl, and we’re excited to have our insightful and fearless hosts voicing their opinions as they cover this consequential and historic moment.” The Ramin Setoodeh book 'Ladies Who Punch' is getting the small-screen treatment, so we're dream-casting the the 'View' cohosts.

When Season 24 begins, most of the co-hosts will continue to appear from their homes, while Haines will broadcast from the NYC studio. Political commentator Ana Navarro will continue to serve as guest co-host and make regular appearances on Fridays and throughout the season.

The guests scheduled for premiere week are listed below: 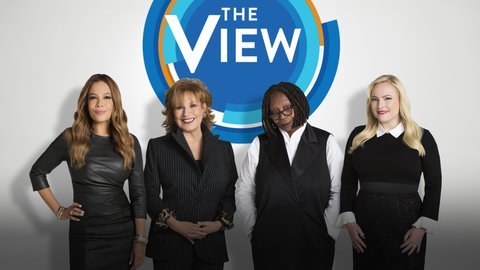