The Young and the Restless is still airing classic episodes these days, but Melissa Ordway (Abby Newman) can be seen this weekend in the Lifetime movie Stalked by My Husband’s Ex. She plays a woman named Sierra, who is neither the ex nor the woman being stalked, but rather the best friend of Kristen (Alex McKenna), who is being harassed by her fiancé Ryan’s (Adam Huss) ex-wife, Nina (Juliana Dever).

TV Insider chatted with Ordway about this flick and what viewers can expect when Y&R returns with new episodes as Abby continues her romance with Chance (Donny Boaz). Read on for the scoop!

First off, how are you and your family, husband Justin Gaston (ex-Ben, Days of Our Lives) and daughters, Olivia and Sophie, handling the quarantine?

Melissa Ordway: For us, it’s been a pleasure. There’s definitely been challenging moments, especially when quarantining first started, but being able to have this time with my children is something I will always treasure. How do you explain what’s happening to them?

In the beginning, we were able to shelter them from it. We weren’t going anywhere, staying home. Then, they wanted to go to school, to the park, and to see their friends. We did a lot of Zoom calls. I told them that there are germs out there and we don’t want you or anyone else to get sick. So, we have to stay home and be really careful. When we started driving around and going for walks and started to see people with masks on, it became this thing where they wanted to start wearing masks, too. It’s been an interesting time. It is hard to explain fully sometimes.

What’s good is that Olivia and Sophie are close in age. They’d play together before all this started but not to the extent that they do now. They’re gotten super close. When one’s in another room, the other will start looking for the other. It’s so cool to watch. [Laughs] Don’t get me wrong — they go at it sometimes, but they do really love each other.

My goal during this whole thing is to life to raise kind loving people … people who are going to change the world! I’m asking, how are we going to raise these girls and make the world better? I feel I’ve done well so far, but there’s a long road ahead.

When did you shoot Stalked by My Husband’s Ex?

First, I have to say I love the movie’s title. It’s why I love Lifetime. I scroll through and look at my guide and when I see the title, I know what I’m going to get and I love it. We shot it right before Christmas break at the end of last year. I was shooting Y&R during the day and then shooting the movie at night.

Yes. We filmed the whole thing in two weeks, super-fast. Maybe even 12 days. I feel like a lot of people might be a little intimated by that, but because of being on Y&R I’m like we can probably do this in a day! I mean, not really, but close. Everyone on the movie was so talented and they were like, we’re moving super quickly. I was, like, this is normal! I’m so used to the fast pace of a shooting a soap opera.

Tell me about your character Sierra.

I’m Kristen’s best friend and we work together. Kristen’s daughter, Lisa, is played by Joey Rae Blair and she told me that her real-life sister Martie plays Bella on Y&R, Kevin (Greg Rikaart) and Chloe’s (Elizabeth Hendrickson) daughter. She’s like, “Wait, you’re on Y&R? My sister’s on that show!” 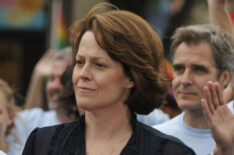 Kristen and Sierra look similar to one another. Does that play a factor in the story?

Yes. It absolutely plays a factor in the movie. Stay tuned. I don’t want to give anything away.

Who else do you work with in the film?

I got to work with Adam [Huss], who plays Kristen’s husband, and he has become one of my good friends. We only had two or three scenes together, but we developed this connection and we’ve bonded. We couldn’t stop laughing. I think we’re meant to be best friends. He’s written this wonderful children’s book, Puppy Love is Puppy Love, which I’ve read to my daughters.

New air dates haven’t been announced yet, but what’s it like being back at Y&R?

It’s so awesome to see everyone. We really are like a family and it’s been like not seeing your family all this time. Now, we see people from a distance and catch up and see how we’re all doing. We went a long time without getting daily updates on one another by hanging out in the hair and makeup room. We’d talk back and forth but there’s a lot that’s happened in the last few months. It’s good to be back. I feel safe at work. I’ve been getting my muscle memory back.

Have you been watching the re-broadcasts?

Yes! I have watched so many of them. I love seeing them because they bring me back to when I was growing up watching the show. I love any episodes that have [the late] Kristoff [St. John, Neil] in them. Those shows just make me smile. We still miss him so much. Everyone looks so good in these shows. Melody [Thomas Scott, Nikki] has not aged a day! Sharon [Case, Sharon] and Michelle [Stafford, Phyllis]? They’re beautiful back then and they’re beautiful now.

Next week, we’re going to see a young Abby (Darcy Rose Byrnes) be the one to tell Victor (Eric Braeden) he’s her dad.

I remember that. I loved the episode. I love watching when Abby’s a baby with Eileen [Davidson, Abby’s mother Ashley]. It’s been so fun to watch the history and how everything has evolved and how some people are still rivals. What’s up with your husband Justin, and is he open to coming back to daytime?

He’s been good. Since I’ve been back to work, he’s been watching the girls more. He’s working on his music. He’d be down to go back to soap operas anytime! Call him!

I have liked each guy Abby’s been with, but her relationships never seem to last — they seem to be able to survive some things, but never writing regime changes! What’s different with Chance is that he, like Abby, comes from an established, powerful family in Genoa City — the Chancellors.

That’s the thing that sticks out to me, too. Chance and Abby are each from these powerhouse families. That’s a first for her, I believe. This is the first love interest Abby’s had that makes sense in that he brings out a more playful side to her. He appeals to the “adrenaline junkie” part of Abby and at the same time, he grounds her. With Chance, Abby feels she can use her influence for good. He’s the “white hat,” always doing the right thing, but at the same time he’s exciting.

Plus, as he’s a Chancellor, Victor may accept him more?

I agree with that. Arturo (Jason Canela) wasn’t comfortable with her being a Newman and an Abbott and all the money she had. Nate (Sean Dominic) didn’t like that the Newmans were so manipulative when Victor faked his death. Stitch (Sean Carrigan) was a great guy, but he didn’t have the family behind him. It would be hard to “get” Abby if you don’t get her family. So, I feel that Abby and Chance are a good match. I can’t wait to see what happens next. Every time I get a new script, I can’t wait to read it.