As we reach the end of Pride Month, with the lack of the usual parades and celebrations due to COVID-19, there’s been plenty to watch on television to remind us of what’s important to the LGBTQ community (if you haven’t watched the Netflix documentary Disclosure that delves into trans representation, add it to your Must Watch List now) and some of the great stories that are as effective and important today as they were when they were first released.

One such project is the made-for-television film Prayers for Bobby, which Lifetime, currently celebrating the 30th anniversary of the Lifetime Original Movie, aired in January 2009 and is airing again on Monday (and once more on July 5) and tells the story of Mary Griffith (Sigourney Weaver), a profoundly religious wife and mother who tries everything to help “cure” her teenage son Bobby (Ryan Kelley) of being gay. The movie is based on the 1995 book, Prayers for Bobby: A Mother’s Coming to Terms with the Suicide of Her Gay Son that recounts the true story of the Griffith family. 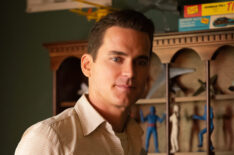 Unfortunately, Prayers for Bobby is still a much-needed story given there are still conversion therapy organizations and young people who are told being gay is the worst thing you can be. With the rebroadcast, I had the chance to talk with Weaver — who received Emmy, Golden Globe and Screen Actors Guild nominations for the role — about her experience making the film, which she calls “probably the hardest part I’ve ever played emotionally,” and whether she still hears from people today about the film.

How much did you know Mary Griffith’s story before Prayers for Bobby came to you?

Sigourney Weaver: I didn’t know Mary’s story. I was also pretty shocked to understand that she lived not far from San Francisco. She wasn’t in Nebraska or someplace. It was happening right outside of San Francisco. I have to say the story was both heartbreaking, and as a mother, I found it quite terrifying. I knew that, first of all, I had to do this project because it was so important to get Mary’s story out. It’s still so important to get Mary’s story out because I think the statistic that I remember from a few years ago is if you are a gay person in a non-accepting family, you’re eight times more likely to commit suicide. So, just that alone should change every parent’s mind and make them open to hearing these things and the truth from your child.

This movie is such an important way of giving a family a way to talk about these things and maybe talk about more personal things in the wake of it. That became Mary’s purpose, to make sure other families didn’t make the mistakes that she made. I always like to think the subject matter is something in the past, and it’s really not, it’s still happening today. I feel like people still need to see this movie.

Yeah. There are several states that still do conversion therapy so until we have a national ban on that…it was shocking to me to find out that that still was going on.

I know Mary Griffith passed away earlier this year, but since she was around when the film was made, did you get a chance to talk to her back then? Was she involved?

Yes, the [film] producers had been in touch with her and, frankly, it was a big leap for me to be able to tell her story, honestly, from her point of view, certainly the first half of it. I spent the day with Mary and her family and we sat with her Bible that had all kinds of sentences underlined in green and red that she had printed out for Bobby. I would say that the lines from the Bible that she’d chosen from the Old Testament were full of judgment and terrifying about what would happen if you did any number of things, most certainly being gay.

It was her openness and her frankness about what was going through her mind that allowed me to bring any kind of truth to the part. I felt it was hard to play even at the time. Even though we were actors, we were just playing these people. But what happened, especially because it’s a true story, is just seared into our hearts. Everyone who worked on this movie felt that they were part of a very important project. How important was it to you that Mary still be sympathetic? In rewatching the film, I never saw her as a villain and I felt for her the whole time even if I didn’t agree with her.

Well, that’s great. I think the script is so well-written and also her own story is so articulate, the fact that she comes so clean about what she was thinking. She put together her own sort of religious beliefs and it was her care for Bobby and his soul that drove her to these extreme measures. The fact that she loved him so much and they had all these special bonds made that turnabout for him even more devastating.

I have to say, it’s probably the hardest part I’ve ever played emotionally because it’s so hard to turn your back on someone you love so much. One of the things that broke my heart, at the end of the day, we were looking at pictures of Bobby and Mary said, “You can look at these pictures of Bobby now and I see that this is how God wanted him to be. He wanted him to be gay, that’s who he was.” She said, “I’m grateful that I can see that now.” But it’s something she resisted.

Everything she said to me, frankly, was so revealing and so honest, and so in support of our doing and my doing a truthful job. I’m glad that you felt for her because she felt lost since none of the things she was saying to Bobby were working. She couldn’t understand why he didn’t hear these things or read these quotes. She was too ignorant about any of it to recognize what was going on. That’s a problem any of us have when they lack the education and the exposure to the truth.

There’s dialogue in the film about blind faith and Mary didn’t necessarily have to walk away from religion but find a different way of looking at it. Did you talk about that much with the filmmakers?

We didn’t really talk about that but I think we all understood that Mary was heartbroken losing Bobby and the church and Dan Butler’s character (Reverend Whitsell), they help her climb out of that and be able to understand a different God. I feel that that is the hope for America, that to become part of a church that’s loving and inclusive and recognizes people for the individuals they are, is just the idea that just gives me relief, thinking about it and gives me hope for all the citizens of our country. There’s so much we all need to learn and there’s so much we all need to change, but it’s all for the better. I hope this movie will reach people who are attending churches where being gay is talked about as an abomination. But you should never use that word for anything that’s part of being a human being. I hope those people who still have these beliefs in conversion therapy will be able to find their way to other ways of thinking.

I’m sure people talk to you a lot about the Alien movies and Ghostbusters and all those big hits, but do you still hear from people about this movie?

Oh, yes. I mean, wherever I go in the world, if I’m promoting something, I have the dearest young people come up to me and give me a hug and thank me for this and for being part of this. It’s obviously helped a lot of young people figure out how to approach their families, if their families are clueless. For an artist to be part of a project that can make such a difference in people’s actual lives is such an amazing thing. So really more than practically any movie, except maybe the Alien movies, I have more responses from young people about this and from parents too. I’m always signing copies of Prayers for Bobby and I’ve met the most wonderful young people because of that.

Prayers for Bobby where to stream