In the darkest episode of the season, Bernard (Harry Lloyd) and John’s (Alden Ehrenreich) jealousy takes a real turn for the ugly. The love triangle stuff has mostly been played for laughs so far, and any drama arising from it has been kept to a soap-opera/teen-drama level. However, this episode pushes things in a bleaker, more sinister direction. The shift in tone doesn’t always hit the mark, but there are a couple of stand-out scenes, including a disturbing yet illuminating sex scene.

Let’s start with that sex scene, shall we? Actually, let’s talk about Brave New World’s obsession with sex, nudity, and orgies in general. Do they serve a thematic purpose or are they merely cheap titillation? Honestly, it’s probably a bit of both. But it’s not as if any of this is widely off-book from Aldous Huxley’s version, which was full of frivolous fornication. What should be noted is how the show worked with intimacy coordinators Ita O’Brien (who also consulted onI May Destroy You and Normal People) and Kate Lush. I think this goes a long way in giving the actors agency in scenes which can be rather exposing and uncomfortable.

“Kate and Ita gave our actors such confidence, command and ownership of the experience of being vulnerable,” showrunner David Weiner told Drama Quarterly. “You’re exposed, and they just embraced it.” You can definitely tell how much it helped with Lenina’s (Jessica Brown Findlay) sex scenes. Lenina’s character remains present in these vulnerable moments. She’s not just a naked body thrown in for the raunchy thrill of it all. You’re still emotionally connected to her and her reactions to what is happening in the moment. Perhaps you can’t say the same for the excessive number of orgy scenes and naked background extras, but with Lenina, at least there is a semblance of nuance to the proceedings.

The sex scene in this episode is a display of dominance from John. It’s kinky foreplay that turns into rough sex and, ultimately, emotional manipulation. It’s hot and heavy, but also distressing, as you get the sense that John is punishing Lenina, and not in a Fifty Shades kind of way. This dark side of John existed before he arrived in New London, and his time in the city has only made things worse. He succumbed in the last episode by having Helm (Hannah John-Kamen) plug him into the system. But Helm can’t remove John’s emotions; she can paint over them, mix them up, but she can’t switch them off. John’s reaction to the system is overwhelming; to suddenly see everyone’s perspective is brain-rattling, and so, he does what he always does. He rips the interface off and runs.

Bernard doesn’t exactly help matters by taunting John. You see, Bernard is just as cruel and unforgiving as the savage in this episode. He needles at Gary the Gamma (Matthew Aubrey) until he admits that John has been sleeping with Lenina. “Lots…” Gary begrudgingly confesses. “Every night for two hours.” Bernard wants revenge, and he wants it to hurt. He tells John about his date with Lenina, implying they had sex, because, after all, that is what Betas do. “They make you feel like you’re the only one that matters,” says Bernard. “How do they do that? Is that their conditioning, or ours?” John keeps up a good poker face, but we know what Bernard is saying is getting under his skin because we know John is already struggling with Lenina’s lifestyle. John tries to clear his head, stomping around the city in his black trench coat with his headphones on, like a moody emo teen who’s just been dumped for the first time. As he sits and wallows on a bench, he’s joined by an inquisitive CJack60 (Joseph Morgan), who repeats words from John’s speech. “People aren’t supposed to live like this. They’re supposed to choose.” After convincing the Epsilon clone to take a seat, John spills his guts about his messed up love life. “She’s screwing someone behind my back, and it’s killing me, and I don’t even know if I want it to stop,” he laments. At the same time, the higher-level passers-by stop and stare at the unusual sight of John and an Epsilon conversing. “Stare back,” John tells his Epsilon brethren, setting up events to come.

Try as he might to ignore his feelings, John can’t help but think about what Lenina is doing. He plugs his optic interface back in and sees her at a nightclub with another man. The thing is, Lenina doesn’t exactly want this. She’s coaxed into a night out by Frannie (Kylie Bunbury), who is concerned about her friend’s mental state. Frannie tells nightmarish tales of reconditioning and banishment. Lenina, however, isn’t convinced banishment is all that bad. “How do we know if no one has ever been?” she ponders. Frannie doesn’t ask those kinds of questions. Instead, she tries to get Lenina back to her old self by feeding her an orange soma (“only councilors have those”) and taking her to get lost in a night of pleasure.

John doesn’t see any of that. He doesn’t see Lenina’s trepidation. He doesn’t see when she plugs in to connect with him or slaps a handsy guy on the train. “This is my body, it’s mine, and I want to be the only one inside it right now,” she states. (This show doesn’t always get deep with its many themes, but its commentary on consent and sexual intimacy is at least consistently prevalent.) John only plugs in when Lenina is with another man, and so, when she visits him, he grills her about her night like a possessive spouse. The interrogation becomes a masochistic sex game as he demands she “show” him what she did. And Lenina seems into it, for a short while at least. But is she doing it because she wants to or because of her subservient Beta conditioning?

Eventually, John pulls away, a defeated, broken heap of a man. When Lenina tells him she loves him, he snaps at her, “No, you can’t; this is love! This is what it costs!” It’s not John’s finest moment; he comes across like a whiny, controlling jerk. But it’s probably worth taking stock of everything John has been through these past few weeks. He was shot at, ripped from his own home, thrown into a new world with strange customs, his mother died, his father—who he never knew—died, and he fell in love with a woman who was never taught what it means to love. John’s been through some s**t, so you can see why his brain is a trash dump of emotion. And that’s not even taking into account all the mind games Bernard has been playing.

Bernard isn’t satisfied with simply torturing John mentally. He wants the savage banished, away from New London, away from Lenina. He tries convincing Henry Foster (Sen Mitsuji) to give the banishment order. “John’s incompatible, volatile, possessive, full of rage and jealousy,” states Bernard, with no hint of irony. Henry, however, is losing it after his meeting with Mustafa Mond (Nina Sosanya). He knows the World Controller is a fraud, that society is a lie. Henry’s convinced the Director is still alive and waiting for him to slip up so he can swoop in and save the day. It’s quite the role reversal from the days when Henry was the calm and measured one brushing off Bernard’s various conspiracies. Right now, Henry needs John around as a distraction from the impending doom.

And so, Bernard needs more dirt on John to enact the banishment. He visits Helm and demands to see John’s interface. But Helm has changed since seeing inside John’s head; she has all these new emotions: pain and love and heartache. Again, there is somewhat of a reversal here, as Helm previously sneered when Bernard said people want to be savages, “to feel free from themselves.” Now she gets it. She removes her platinum blonde wig and cries real tears. “I’m me, I think,” she tells Bernard when he wonders what the hell is happening. Bernard doesn’t have time for this emotional awakening; he knocks Helm to the ground and connects to John’s interface. And he sees everything, the childhood memories, the sex with Lenina, and the Director’s death. This is the evidence Bernard needs to stitch John up. And as the whole city watches the savage’s memories, they all see the Director plummeting from the cliff’s edge as John stands over him. Henry, tipsy on soma, gives Bernard the go-ahead to banish John, leaving it in the councilor’s hands, which Bernard relishes. Lloyd is brilliant in switching between comical sad sap to evil villain in the blink of an eye. And this episode he’s at his most despicable, showing real glee when he tells John he’s banished. “All you had to do was be happy,” he says as if it’s that easy, and lying to himself in the process, because Bernard is certainly not a happy man. “A savage is a savage,” he remarks. “You can’t change the nature of a thing.”

But something happens here, something unexpected. The Epsilon workers do not follow Bernard’s orders to apprehend John. They, too, have awoken. Instead, they listen to John. As Mustafa realizes this episode, John is the game-changer, the one thing Indra didn’t account for. As John leaves with the Epsilons, all Bernard can do is stand and stare. The battle lines have been drawn. And just in case there are any doubts, the episode ends with Henry following some Epsilon landscapers behind a hedge, only for them to return with red-speckled tennis shoes and a trash picker dripping in blood, setting the stage for what could be a brutal finale. 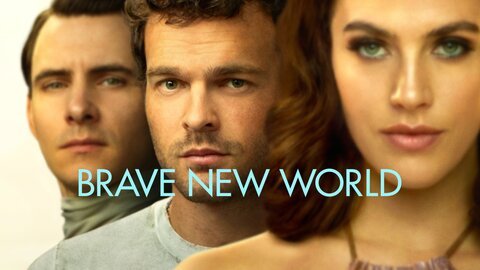