Talk about perfect comic timing! The world really needs a laugh right now, and as of June 1, all 11 seasons of The Carol Burnett Show are available to watch on several services, including Prime Video. It marks the first time fans can stream the series in its entirety — cue the Tarzan yell of joy!

Below, Burnett takes us down memory lane.

When is the last time you watched the show?

Carol Burnett: A few years ago for my book, [2016’s] In Such Good Company, I watched all 279 episodes. But I’m not Nora Desmond [Burnett’s faded silent film star character, based on Sunset Boulevard’s Norma Desmond, who screened her old movies daily]. I only do it for research! [Laughs] Do you have an all-time favorite episode?

I don’t, but I loved doing movie takeoffs: Double Indemnity, Gone With the Wind, spoofing Shirley Temple or Fred Astaire and Ginger Rogers. I grew up watching old movies with my grandmother, who raised me, and I’d play-act them with neighborhood kids.

What recurring sketches stand out?

“The Family” [about dysfunctional Southerners; Burnett played daughter Eunice, hounded by Lawrence as critical Mama; it was later spun off into the sitcom Mama’s Family]. It was all character and situation: There were no jokes. Also “Mrs. Wiggins and Mr. Tudball” [Burnett’s ditzy secretary whose ineptitude perpetually frustrated her boss, played by Conway]. Tim would try to break me up and I’d have to bite my finger to keep from laughing. When we did the Gone With the Wind sketch, I fell down those stairs nine times in one day. It happened three times in the sketch, and I did it in the run-through, the dress rehearsal…. It’s a wonder I didn’t break my neck! I did it by relaxing and going in slow motion. A few times over the years, I got bruises, but nothing serious. Harvey did a lot of the physical stuff. He was fearless.

The show still feels fresh. Why does it hold up?

One of the reasons is because we were never topical. We went for good old-fashioned belly laughs. I dare anyone to watch the dentist sketch with Tim and Harvey [as a rookie DDS and his ailing patient] and not lose it completely. 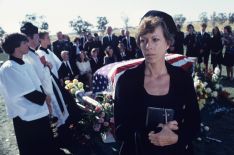 What new comedy makes you laugh?

I don’t watch sitcoms much. I tried a few recently — I won’t say which ones — but I find for the most part, they stoop too low to get a laugh. But I did binge-watch [Pop TV’s] Schitt’s Creek. I love that!