The Winters family theme week continues today and tomorrow on Young and the Restless. So far, we’ve seen the first meeting between Neil (the late Kristoff St. John) and Drucilla (Victoria Rowell), the debut of Malcolm (Shemar Moore), and Devon’s (Bryton James) dangerous encounter with a lion! Today, Lily (Christel Khalil) and Daniel (Michael Graziadei) go on the run and on Friday, Devon’s officially adopted by Neil and Dru.

TV Insider chatted with the Emmy-winning James about how he came to join the top-rated soap, what it was like working with the lion (no green-screen!), continuing the legacy of the Winters clan, and a memorable encounter with one of the show’s former legendary executive producers, Paul Rauch. Read on for some thoughtful insights. How are you handling being quarantined?

Bryton James: I’ve never had more home-cooked meals in my life! I see people constantly walking up and down the streets. People are wearing masks and waving.

Have you been watching the classic Y&R episodes?

I have been. It’s been quite a blast from the past – mostly, our hairdos. That’s what sticking out the most to me.

I’ve seen them. Did you try to file an injunction? Kidding, but your hair was pretty different.

[Laughs] It’s been cool to see. I’ve had a love/hate relationship with my hair. Each year I was on the show, I kept chopping a little more off until I got the look I have now. It’s been really great to see some familiar faces in these past episodes. Fans have been loving them, too. 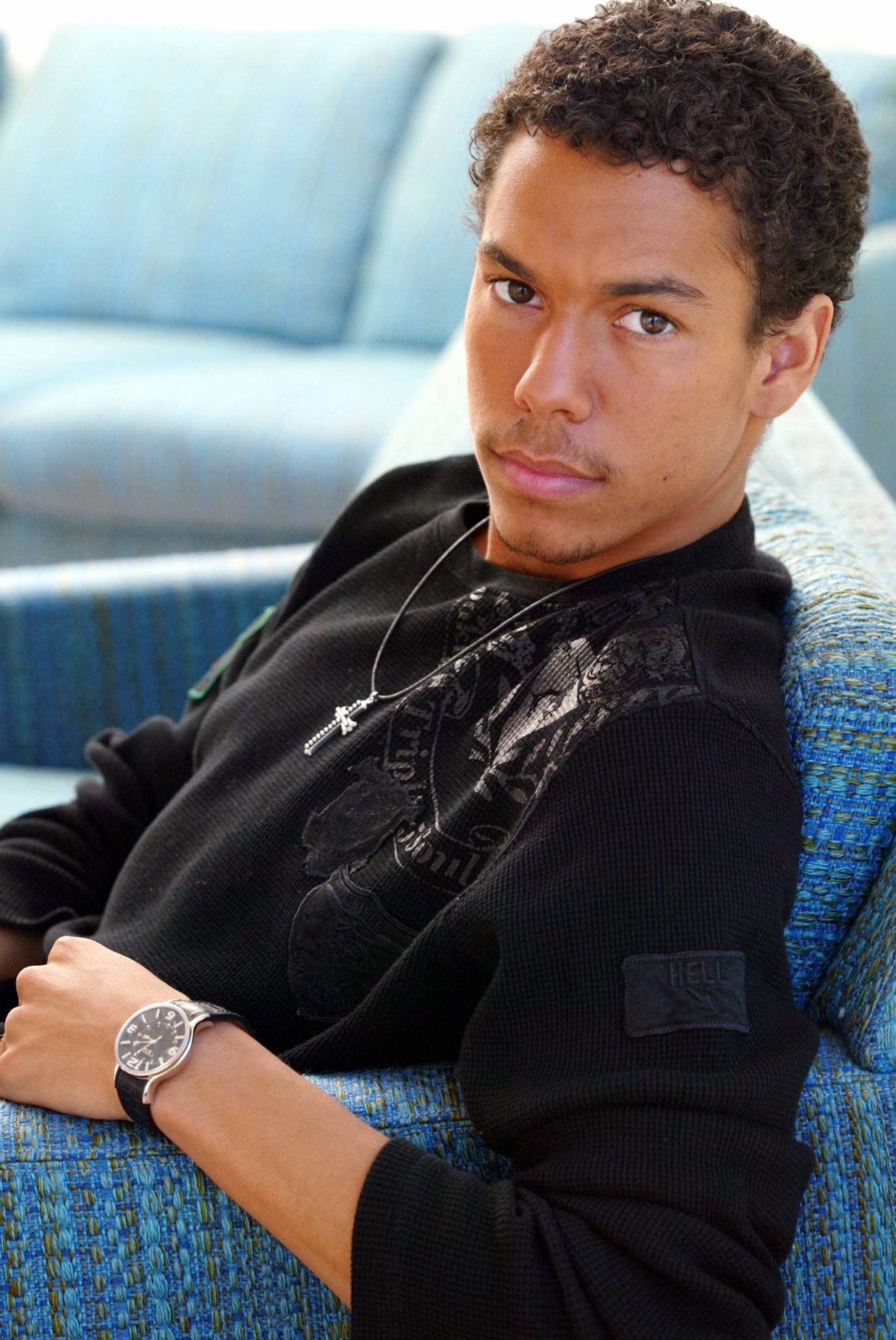 Bryton James on Young and the Restless in 2005 (©John Paschal/jpistudios.com)

Do you recall your audition for Y&R?

Yes. I was 17. I couldn’t imagine what I’d be doing because there were all these adult storylines on the show. They pulled scenes from old episodes for my audition They had nothing to do with Devon. The scenes were about a character confronting his father for having walked out on the family.

My first audition was with then-casting director Marnie Saitta. She stopped me halfway through my reading and said, ‘Finally! Someone reading the character the way it’s supposed to be read!’ A few days later, I went in for a screentest. The show had given me four new scenes from the audition to the screentest, which was with Christel. I got through it. Christel put in a good word for me and the rest is history.

When did you learn you were going to be in a foster care storyline, which Victoria, who had grown up in the foster care system herself, had championed?

There was an immediate sense of great importance. Of course, I wanted to do a great job because of how meaningful and personal it was to Victoria. The stories they gave me early on were all directly from experiences that Victoria herself had.

The reason Devon ran off to the zoo was because no one had remembered his birthday. Victoria told me that that had happened to her as a teenager. [Her foster family] had forgotten her birthday. That gave me great insight into Devon and what he was feeling.

Devon’s adoption by the Winters family becomes legal on Friday’s episode. What did that mean to him?

It showed commitment. It showed someone following through with their word. Devon had encountered families that ‘talked the talk,’ but didn’t ‘walk the walk.’ He dealt with a lot of emotional insecurity. To have the Winters family commit to him meant a great deal. It showed that they were in for the long haul with him even though he’d put them through a lot.

How close did you get to the lion when Devon ran off to the zoo?

They built a zoo set on a stage in a studio on the CBS lot and they had me running through the set, jumping over railings. It was where they later built the Clear Springs set. The show did great things for our stories and they still do.

Was it green-screen or were you working right near the lion?

Oh, right there. Yeah! The week before we shot it, Christel, Kristoff, Shemar, and I went to the facility where the lion was that was going to be used in the scene. No one could wear any perfume or cologne. They wanted us to be around the lion so we’d be familiar, making sure if we had any questions or concerns that we should express them. I would have had some…did you?

All I knew is I had to out-run everyone around me…I had been around [animals] before. There was an aerial shot of me in the lion’s pit with Shemar and [the lion] was less than five feet away from us. The trainer was right behind us too, but the lion was right there.

After being saved, Devon had a line about being in trouble, but he had to know at that point his family did care about him.

Yes. Even though they forgot his birthday, he realized it wasn’t out of a lack of concern. He saw that they risked their lives for him. He’d never experienced that. After Devon was rescued, Neil did the Crane Kick pose from The Karate Kid, ribbing Malcolm for his ability to win over the lion. Funny.

That spoke to Kristoff’s sense of humor. We all truly were — and are — a family, on and off-screen. Kristoff had fun in that part of the scene.

And then it took a tragic turn when Lily brought the car around, skidded on the ice, and accidentally hit Neil.

People have been saying online, ‘Lily’s a horrible driver! First, she hit Neil and then, she killed Devon’s wife, Hilary (Mishael Morgan)!’ How are you continuing the Winters family legacy?

There would be no Winters family without Kristoff and Victoria and also, Shemar and Tonya [Lee Williams, ex-Olivia]. They made that family what it is. Christel and I try to live up to that. I think the show and the writers have done a phenomenal job of integrating us and elevating the family being right up there up there with the Abbotts and the Newmans and the Chancellors, of which Devon is a member. For him to have established his own company with Neil was a big thing.

Now, Lily’s involved in Jill’s (Jess Walton) media company. It’s in the writers’ hands to keep the legacy going and it’s in the performers hands to keep it believable. I think we’ve all done a great job. The fans are loving it.

Fans are speculating online that because Amanda (Mishael Morgan) grew up in foster care that she’s somehow related to Hilary. We don’t know what it is yet. Do you read the speculation?

No, we don’t know, and yes, I do read the comments. We don’t know what’s next. We come in with our own ideas of what’s going to happen. I think the writers are doing a great job of teasing the fans, bringing them along slowly as we discover Amanda’s background. Mishael has always been an amazing addition the cast. Whatever they end up doing, as long as there’s interaction between us, it’s going to be good. Were you pleased that Devon got Katherine’s inheritance back?

Yes. There’s so much story and opportunity they’ve created for Devon because of the money and him wanting to do good with it. He understands where he came from and appreciates where he is. He wants to put that back into the world. Having a character of any color or background represent that is a good thing. I’m very happy that they’ve continued that with him.

You and Daniel Goddard (ex-Cane) have come up with an app?

Yes. We’ve developed this app called BILDBORD and we’ve been getting a great response. People have been giving us feedback so we can make it as good as possible. The app helps with match-making of any kind. You can create a profile, attach your social media presence to it, keeping everything all in one place – like a digital business card. You can add hashtags with what you’re interested in. Some matchmaking platforms are limited or they ask you to pay or you pay to add filters, but with hashtags we allow you more control. You’ve worked for a lot of producers during your tenure at Y&R. Any memories of working for the late Paul Rauch?

Yes. Paul was great. He was the way he was because he wanted things to be great. He was passionate about his job. One time, we had a group scene in the Winters apartment. It was about Ana (Jamia Simone Nash) being taken away by Tyra (Eva Marcille). During rehearsal, we used that time to ‘get out the goofiness’ and loosen up. While we were doing that, Paul came out onto the set and walked right up to me. He and I had never spoken before, but he let me have it in front of everybody. He told me that I need to ‘bring it.’

As he was walking away, Kristoff couldn’t help but poke fun at me and back Paul up. He said, ‘Yeah, that’s right. You need to bring it!’ Paul, without turning around, says to Kristoff, ‘And you take that gum out of your mouth!’ It was a funny moment between Kristoff and me because he thought he could poke fun at me, but Paul gave it to him, too!