David Boreanaz Looks Back on the ‘Beauty’ of ‘Bones’ & Booth

If you’ve been streaming Bones or caught a rerun or two on TV while staying home, chances are you’re wondering where Temperance (Emily Deschanel) and Booth (David Boreanaz) would be now.

TV Insider asked Boreanaz that exact question when chatting recently about SEAL Team‘s third season. “They’d be arguing, for sure,” he laughed. “They would be going back and forth on something.” 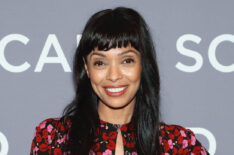 “I just so thoroughly loved playing off of what Emily was putting out there with Bones,” he said of “the beauty of those characters.” “It was just so much fun. You think you’re going one way … Booth was very good at finding humor in a lot of things that she didn’t find funny. I’m sure they would be discussing something, so complex to her but yet so simple to him.”

Bones aired for 12 seasons on Fox. The series ended in 2017, with a happy ending for Booth and Bones (married with kids and planning to return to doing what they do best once the construction on the Jeffersonian is done following an explosion). Following the end of the procedural, Boreanaz joined SEAL Team, which was just renewed for a fourth season.