Sometimes characters don’t get a happily ever after at the end of a series — such was not the case for Bones. Those characters not only lived, but we knew what would come next for them.

And for Cam (Tamara Taylor) in particular, she certainly changed over the course of the series. In fact, she took a step back from her work at the Jeffersonian to focus on her family in the final episode. 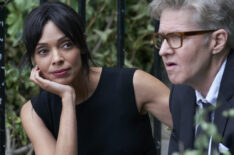 Taylor can now be seen in the Netflix sci-fi drama October Faction about monster-hunting assassins who are part of a secret organization. Here, she looks back on Bones.

Where do you think Cam would be today? Last we heard, she and Arastoo adopted three boys and she took a leave of absence from work.

Tamara Taylor: [October Faction‘s] Dolores almost picks up where Cam left off. Cam, who was always career-first, actually sort of realized at the end of the series that there’s more to life than her career. There’s much more to life, and taking on parenthood and a solid, beautiful relationship was a priority that I don’t think she even imagined at the beginning of the series. At the beginning of the series, it would have been hard to imagine Cam proposing like she did.

Oh, exactly. Cam definitely led with her head, and by the end of the series, her beautiful evolution was that she finally dropped into her heart. Arastoo got in.

Looking back on Bones and Cam, what moments stand out for you now, both from filming and for your character?

It feels like those 12 years are like a montage of so many memories. I don’t know if I could choose one in terms of the episodes. But in terms of the experience, just all the laughter and all the silliness, that cast is like my family. We all grew up together. The thing that was most memorable was just all of the ridiculous laughter over grisly, gruesome corpses.

October Faction where to stream