‘The Masked Singer’s Kangaroo: ‘It’s Like a Childhood Fantasy’

[Warning: The below contains MAJOR spoilers for Season 3, Episode 12 of The Masked Singer, “The Mother of All Final Face Offs, Part 1.”]

Kangaroo has been dressed for a fight all season, so she was prepared for the Smackdown in Wednesday’s episode.

She faced off against Astronaut in the first battle round of The Masked Singer Season 3. She performed Donna Summer’s “Hot Stuff” while her opponent followed her with *NSYNC’s “Bye Bye Bye.”

In the end, Kangaroo was unmasked: influencer Jordyn Woods.

“This whole experience has just been so surreal. It’s been so much. I was so sad it was over, but on the big scale of things, I made it farther than I could have imagined,” she told TV Insider. “I was just sad that I had to depart from Kangaroo and I won’t get to live inside of her anymore, but she’ll always live inside of me, I guess.”

What was most challenging about this experience?

Jordyn Woods: The whole thing in a way was a challenge. I had never sung outside of my own home to anyone publicly, never performed. It’s like a childhood fantasy where you can envision yourself one day like Hannah Montana or something on stage, but never actually doing it, and this time, I got the opportunity to really be on stage and perform for not only hundreds of people but millions of people back home. It was a pretty crazy experience. Let’s talk about the Kangaroo costume. Did you choose it? Were there any other options?

Honestly, initially, I wanted something more girly and I wanted something fun, but I love the element of mystery. I think that at first look, with Kangaroo, you don’t know if Kangaroo’s a girl, a boy, if they’re old, young, and it’s a conversation starter. I really liked the Kangaroo because it’s almost like there’s a cuteness about it but also strong.

And performing in the costume? Were there any challenges?

It had a long tail, so that was cool. But just the same challenges that everyone faces: just making sure you’re breathing right, staying hydrated because it gets hot in there, making sure your voice is projected properly through the mask. I was wearing these gloves, so they had to build in a mic stand kind of in, so just making sure I hold the mic right within my glove because I didn’t have my fingers.

Let’s talk about the Smackdown.

It was fun, honestly. That was the first Smackdown [of the season]. To be in it, I was nervous, but it was a cool experience.

What went into your song choices? Did you have a plan for genre or type of vocals you wanted before the season and did that change as you advanced?

Definitely. I really just wanted to try to showcase all different songs. I wanted a variety. Of course initially I probably thought in my head that my song choices were going to be one thing, but they ended up being the opposite. I just had fun with it. I made the best of everything, and I had a lot of ballads, a lot of emotional songs. That’s what really works for me. Are there any songs you planned to perform if you continued?

What did you think of the clues package that was put together for you? Did any of them make you scratch your head or make you think it would be easy to guess you?

Honestly, I think that the most revealing clue was the Valentine’s Day episode when Leah Remini was on the show and I said that her and I shared the same table, meaning we were both on Red Table Talk. But for the most part, people are really smart, so they shocked me. They figured out the clues so quickly. 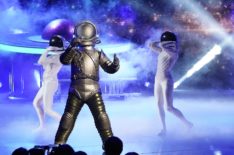 5 Reasons 'The Masked Singer's Astronaut Is Probably This Country Star

The clues are pretty clear when it comes to this talented contender.

What’d you think of the panelists’ guesses and reactions?

I was so excited to hear what they had to say every time I was done performing. They really added a whole other element to the show that just made it, I felt so rewarded after every performance because of trying to hear their guesses, and what I noticed about Ken is he jokes a lot but every time I performed, he got a little bit teary.

Who are you most looking forward to hearing from once you’re unmasked in this episode?

I’m excited for everyone to see. None of my friends know, so I’m excited for them to finally get to know what I’ve put so many hours into doing and the story behind it. I would be in my house [the night before] performance night, I could barely sleep, but I couldn’t really express what I was going through with any of my friends.