[Warning: The below contains MAJOR spoilers for the Season 3 finale of The Resident, "Burn It All Down."]

Episode 20 wasn't originally supposed to be a finale for The Resident, but it certainly had a season-ending feeling to it.

After being hooked up to Dawn's Candida auris vent, Derek lost his eyesight — and Conrad (Matt Czuchry) and Bell (Bruce Greenwood) discovered an abscess preventing Kit's (Jane Leeves) son-in-law from benefiting from the drugs. The only one who could save him? None other than the man responsible for the superbug getting out: Cain (Morris Chestnut). 8 Burning Questions We Have for 'The Resident' Season 4

What's next for the Chastain staff, Red Rock, and the romantic relationships?

He was also needed to operate on his ex-girlfriend, and after the others made sure Derek was a higher priority, he refused to let anyone else do her surgery, until it was too late. She died on his table.

Then, in the final scene of "Burn It All Down," Logan Kim (Rob Yang) decided to look elsewhere to be his rainmaker: Conrad.

While the Fox medical drama has yet to be renewed for a fourth season, showrunner Todd Harthan is hopeful. "We're all feeling very confident that that call will come," he told TV Insider. "I think we're in really good shape to continue on." And if they do, they'll do so on the same trajectory they'd planned for the three episodes of Season 3 that were cut. "We are looking at everything we had at the end of the year for those few episodes," the EP explained. "The main arcs and things we had planned, I think everything is going to remain intact." A couple patients' stories may change.

Here, Harthan breaks down the finale, including what changed from the original Episode 20, and teases what could come next.

Did anything change from the original script for the episode when it wasn't supposed to be the season finale?

Todd Harthan: Yes. If you look at the last couple seasons, as things come to a head, it's always spaced out over those last three or four episodes, where we have a lot of great drama, twists and turns, and personal stakes. This year was no different.

In many ways, we were lucky that this particular episode, 20, was strong and finale-worthy, but there were some things we had shot that we pulled up and were able to utilize in this particular episode to make it hopefully a more satisfying conclusion to the season. A lot changed in the last 10-12 minutes of the episode. Prior to that, it's largely what was scripted.

Logan presents Conrad with an interesting opportunity to be the next Cain, even bringing up saving Chastain. Does Conrad think that this could be a way he can take down Red Rock from the inside?

That's the seed that we're planting, for sure, which is the grand irony of the person that fired him earlier in the season is now coming in and saying, "Hey, would you like to be the new face of this company?" Has our villain opened the door for our hero to come blazing through and is that going to be [how he] takes him down? That's the tease. But as we do, in Resident land, there will be some surprises in the next season for our heroes. It never comes easy. 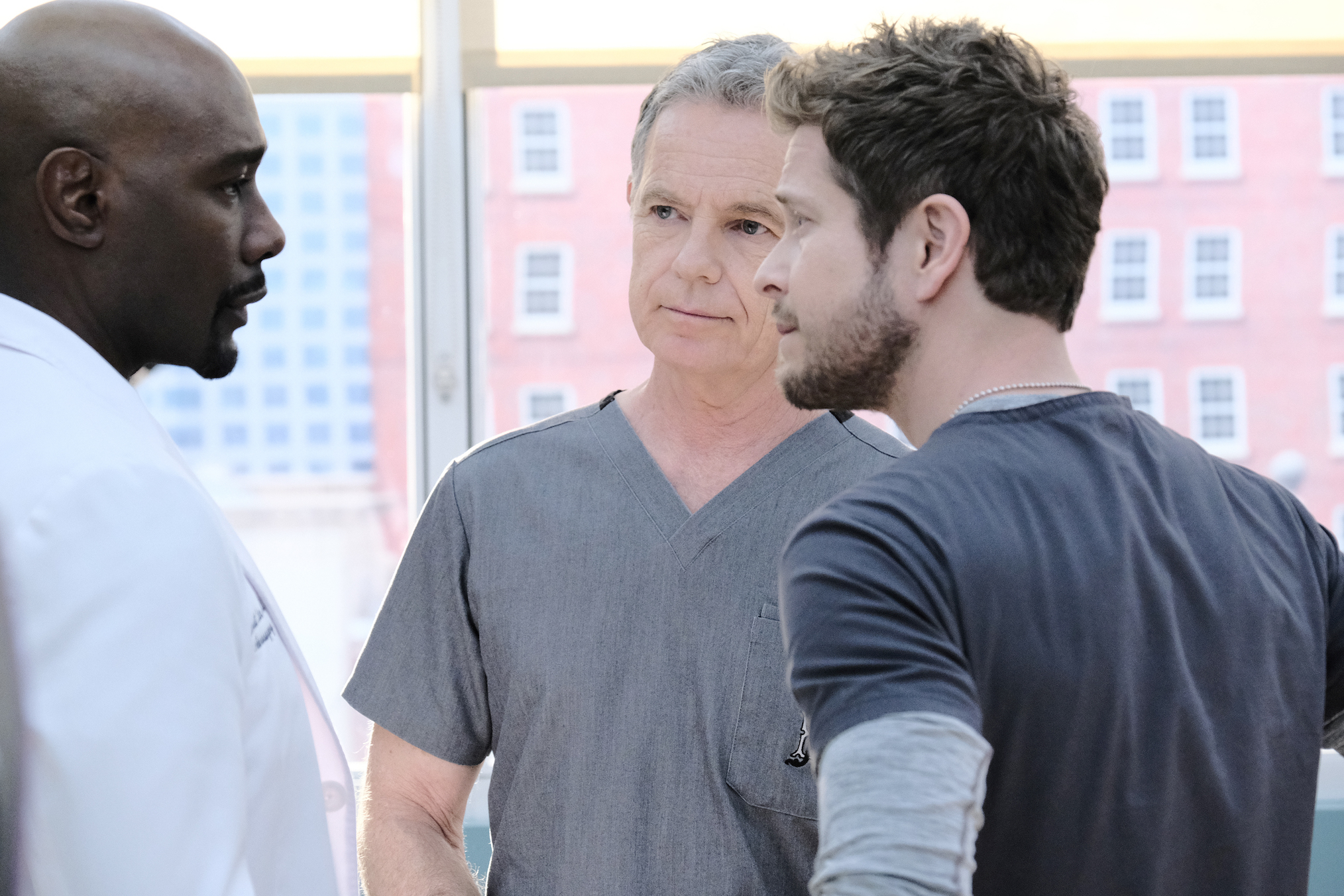 We saw another side of Cain with his ex, not only around her but also in losing her. And there are his recent conversations with Logan about the superbug. Will that change him moving forward? Is he on the path to some sort of redemption?

That's the fun of characters like Cain. It's been what's so interesting for us as the writers, and hopefully for the audience, about Bell, from where he started to how we humanized him. What we're teasing is — especially after this particular experience and heartbreak, to a certain extent — could this potentially change him? We want the audience asking that question.

Could we see him teaming up with the Chastain doctors against Red Rock?

You never know. I'll be perfectly honest. This has been a big debate with the staff about whether or not we want to take Cain down the path of redemption and have him join our crew of loyal good guys, or if this experience hardens him and darkens him even more. That's the thing we're mapping out and talking about the pros and cons of and seeing what we're the most excited about going into Season 4.

Truthfully, because it was such an abrupt end of the season, we never really got to start mapping out what we want to do with Cain, so it's still a bit up in the air.

Conrad and Nic are engaged, and I loved that proposal. Other than the engagement party, we didn't really get much, so what can you say about the kind of wedding they'll have?

We can only do it once, so it's like the proposal. We talked about that so much in the writers' room about how we wanted to execute that, and we must have had a dozen different versions, and then the one we landed on, we all collectively felt like had its own fresh and unique execution. We want to do the same thing with the wedding, so we don't want to rush into how and when we'll do it. It is certainly being talked about, even more so than the proposal.

Mina and AJ's dance continues. In an ideal world, how would that relationship play out next? And what's next due to their positions at Chastain?

If you could just be a fly on the wall in our writers' room, you'd see this is up there with the top debates, too, how we want these two to progress. I love and continue to love the acknowledgement of mentor/mentee and not crossing a certain line, as hard as that's been for the two of them. I know it can be frustrating for the audience, too. You just want it to happen, much in the way like the Conrad-Nic proposal and ultimately hopefully a wedding. Plus, questions about rebroadcasting old shows and more.

But to me, the tug of war and the push and pull of their professional careers versus their personal is very satisfying, and to me, there's still a lot of drama and twists and turns left to be mined. When we are back in the writers' room and talking about the next chapter for these two and all the challenges and changes that are happening in their personal lives and at the hospital, what we think the best path forward, it's one of those things that we're going to have to grind out and figure out when we're probably in our virtual writers' room hopefully in the coming weeks.

But it's one that continues to be at the top of our list because they're so great together. They have such great chemistry, so we just want to make sure we don't leave a bunch of interesting story on the table by rushing the progression.

It's been particularly hard for Kit with Red Rock coming in, first with her job and now with Derek and her family. But it does seem to be looking up for Derek, right?

Derek went through to hell and back, as it were, and the family goes with him. Yeah, there is much more hope and light in the tunnel, and what we're leaning into is what does his rehabilitation look like, how long will it take him to get back to 100 percent and get back to being a full-time father and husband? We have put him and the family through quite a bit, and what we're teasing for the audience is the next phase, which is, how does Kit respond now that she's fought one phase of this war? But the next one is, the people that put her family through that, karma and Kit are coming for them. Seeing the finale's title, I thought, "Kit needs to 'burn it all down.'"

Yeah, I know. Look, knock on wood, which I am now, but with another big season next year, when that happens, she's amazing. We love Jane, and we have big plans for her and her arc.

You brought the characters together a bit more, both against Red Rock and in general.

Especially this season, maybe more than in previous season, because our two main villains, Cain and Kim, were so embedded inside the walls of the institution where all of our core characters live and breathe, so it did start bringing them all together. Truthfully, [we had] three episodes that we were mapping out to continue to show our team growing closer and closer together and a united front, so when we kick off next season, we're still mapping out how we want to enter a Season 4. But we are excited about our heroes, both nurses and doctors, coming together to fight for the side of good and right, much as you're seeing in the real world now. That's the story we will likely pick up and tell at the beginning of next season.

Are there any new characters you're planning on introducing?

We're talking about that now. There's always the excitement of a new season and new characters, but nothing has been solidified yet because we haven't gathered the room. We always look to introduce new, young doctors, new interns, now that Devon is getting more mature. We're talking about what that would look like, [how] that would be different, refreshing, and interesting. We definitely want to lean heavier into our group of nurses, both men and women, because as great as Nic is, we feel like we could use another amazing nurse character. We're looking to populate Chastain with two or three more exciting faces. Devon did come across as more mature, especially in the last few episodes, even just walking into a room.

Yeah, he's all grown up now. He's learned some important lessons. You saw him mentoring Ezra a bit. We like that look on him. Now we're trying to think of who's the next person he could potentially take under his wing.