Sally’s Not Dying on ‘Bold and the Beautiful’! Courtney Hope on the Shocking Twist

Bold and the Beautiful has written many shocking twists and Sally’s (Courtney Hope) recent reveal – the flame-haired heroine isn’t dying after all; she’s been, in fact, faking her illness – ranks among their best.

Why put her loved ones through such angst? Sally got tired of being dumped by Wyatt (Darin Brooks) so, she got her pal Dr. Penny Escobar (Monica Ruiz, an aspiring designer) to go along with her scheme, which, so far, has been working. Can this outlandish scheme actually work? TV Insider reached out to Hope to get her thoughts on this twisted tale. Read on to get her insights!

Whoa. Whoa! WHOA! I don’t think anyone saw this twist coming. Kind of gives a whole new meaning to remission! When did you know Sally wasn’t really ill?

Courtney Hope: Exactly! It definitely was a shock to me as well to be honest, because I only found out the week before I got the scripts where Dr. Escobar shows up and confronts me. Brad [Bell, executive producer/head writer] called me to tell me it was all a Spectra scene and I was very surprised lol. Also, kind of excited!

Fans are going back to past episodes to watch for little giveaways/hints that Sally was faking this? Were there any?

Not too many, because Sally wasn’t truly feeling well from the beginning. There were a lot of moments, especially in the very early stages when she really was scared, ill, and very concerned about her well-being. She only came up with the plan midway through not feeling well, but even then, she wouldn’t want anyone to know it was fake. Her family members are the very best at playing games, concocting schemes and being top-notch con artists, so it’s in her blood.

When Sally ‘fell down’ on her way out the door of the beach house earlier this week, the camera went tight on you, and there was this look on her face that, to me, read ‘Good. This is working.’ Did you add similar moments into your performances prior to that?

Once I found out that Sally wasn’t dying, it changed the way I approached everything. Once the audience knew, it became more essential to make those moments known. This is where the fun began…

What prompted Sally to do this? Was it Wyatt’s regular vacillating between him and Flo?

Sally has gotten the short end of the stick ever sense she showed up in Los Angeles. Though this has been the case her whole life, L.A. served as a place for her to make a name for herself and change her history. No matter how hard she’s tried, she can never seem to find a win. How Will 'Y&R' & 'B&B's Filming Hiatuses Affect Their Schedules?

The people around her take her for granted, are disloyal, always choose ‘the other woman’, and only see her to be as good as her last name. This is very frustrating and hurtful to Sally because she has given everything her heart and soul. She’s had enough and decided to finally fight to win for what she loves, and, unfortunately, this is what presented itself.

Swiping designs is one thing; but Sally’s stealing people’s trust – does she have any regrets?

Of course, she doesn’t like being the bad guy. Deep down, all Sally wants it to love and be loved in return, but she also isn’t going to sit back and get walked all over time and time again. The Spectras are known for fighting for what they believe is rightfully theirs and will stop at nothing until that happens. Sally ‘Jr.’ has taken a backseat to the antics for a few years now because she believes that truth and honesty is the best remedy, but there is a breaking point and then all hell breaks loose. Again, she isn’t happy about it, but she gotten a bit derailed from losing all the time.

So, circling back on the timeline, you didn’t know that Sally wasn’t dying initially?

Yes. I only found out a week before we shot the ‘reveal scenes’. I was torn with finding out this late in the game, I would’ve approached it differently if I had known, to be honest. Though, there is a huge part of me that was glad they made a last-minute decision like that because the shock factor was real, for everyone. There were no telling signs that Sally wasn’t really sick the whole time, so it came as the ultimate surprise. Makes for better plot twists when it all comes out!

Double tap if this was your reaction to finding out Sally’s secret! 😱 And comment below what you think will happen next…

B&B scored again keeping this twist under wraps in world in which spoilers on many shows tend to get out; how difficult was it keeping this from people? Did Chad [Duell, Michael, General Hospital, Hope’s boyfriend] know?

It wasn’t too difficult, I kind of love keeping people on their toes! Chad and my parents knew. Chad and I run lines together so obviously he knew. I told my father first because, as a concerned parent, he was curious if I still had a job – plus, he hates surprises. My mother knew Sally wasn’t going to be dying, but she didn’t know any of the details. Unlike my dad, she hates spoilers and also hates keeping secrets!

Penny’s backstory is that she doesn’t really want medicine, but fashion. That’s a great motivation for her role in this and we know from Bridget (Ashley Jones) that people can have an interest in both fields. How vital is it that Penny not blab this?

It’s extremely vital, because [otherwise] Sally’s whole plan will unravel. I don’t think Sally has a clear-cut agenda because this isn’t something that she is proud of and truly wants, but she feels it’s necessary. If Penny were to reveal the truth without Sally having all of her answers flushed out, it could ruin everything.

Does she believed that this will help Wyatt see that he truly loves her? In a weird way, this plan could actually work!

She’s hopeful that it will! She witnessed with Thomas (Matthew Atkinson) and Caroline (Linsey Godfrey) what thinking someone is dying will do to a lover, and she hopes that Wyatt will come running back to her as Thomas did to Caroline. She also hopes Wyatt will stay after he finds out the truth; again, Thomas stayed with Caroline. Wyatt and Sally were so great together and, if not for Flo (Katrina Bowden), they would still be together and married by now.

Did Sally purposely turn in those particular (bad?) designs hoping to get Ridge’s sympathy?

In the beginning, Sally was honesty having issues, she wasn’t feeling well, shaking, and her designs were faltering. Once this whole plan arose, Sally decided to press into it any way she could because she knew people were worried about her, which felt nice for a change. If her designs were TOTALLY out of character then it was more obvious there was a ‘problem’ and hopefully they would sympathize with her even more than if they were just ‘kind of’ off. All Sally has wanted was to be a respected ‘designer’ and it was nice to be handed an opportunity for a change. 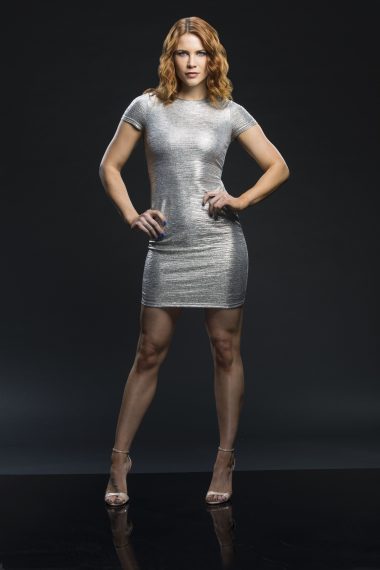 How well thought out is Sally’s plan — once she has Wyatt’s devotion, will she tell him she’s in remission? Or is she thinking that far ahead?

Honestly, it isn’t fool-proof. At this point, she is kind of flying by the seat of her pants, because it is taking longer than expected for Wyatt to ‘wise up’. Which is frustrating and disheartening, and frankly, making Sally more desperate. Her plan is to go into ‘remission’ once Wyatt comes around, but at this rate her ‘month to live’ is past its due date.

Reaction on line has ranged from ‘Thank goodness, Sally’s not dying’ to ‘How could she be so deceptive?’ What do you think of the responses?

I think it makes for an interesting conversation because, to be honest, I agree with them both! I am very thankful Sally isn’t dying, for many reasons. I also am sad to see Sally feel like she has to resort to her old ways of conning to get what she wants, but it keeps it interesting. I was tired of seeing Sally be walked all over, so I am happy she decided to do something about it. I wish it was something ELSE – (laughs) but at least it’s something! 'Bold and the Beautiful's Matthew Atkinson Delves Into Thomas' Psyche

In a way, Sally’s taking a page from Thomas’ book – lying to get what she wants; down the line, is this something the two could bond over?

I hope so! I really felt that they were an interesting pair from the start and very much alike in a lot of ways, designer dream aside. Thomas was Sally’s first romantic relationship ever, so her baseline for a lot of responses to relationship problems is him. They both want very similar things in romance and business and I would love to see them come together and fight that battle together.

Does Sally ultimately think that this crazy plan can actually work?

I think at her core, no, she doesn’t think it will- BUT she is hoping! She is too far in to turn back now, so she is going to fully press into this scheme and hopefully come out on the other end loved and happy. She will definitely go down swinging.