Courtney Ford Breaks Down That Darhk ‘Legends of Tomorrow’ Twist

[Warning: The below contains MAJOR spoilers for Season 5, Episode 7 of DC’s Legends of Tomorrow, “Mr. Parker’s Cul-De-Sac.” If you haven’t seen it yet, have Gideon transport you to another page.]

Guess who came to dinner… and left us all a little shook? Damien Darhk! That’s right, the villain we thought was forever consigned to Hell rose once again and this time, Neal McDonough‘s magical meanie headed straight to see his daughter Nora (Courtney Ford).

Sent as an Encore by Astra and blissfully unaware that his former demon seed was now a Fairy Godmother working with the Legends — and in love with nicest Legend of ’em all, Ray Palmer (Ford’s real-life husband, Brandon Routh) — Daddy Fearest soon showed his true colors during a doomed dinner party (that was supposed to set the stage for Ray’s marriage proposal), some deception by Constantine (Matt Ryan), and several attempts on various lives.

It was easily one of the show’s funniest hours, thanks to McDonough’s demented “pride” over what he assumes is his daughter’s life of evil, a mid-episode rant by Ryan, and a Mr. Rogers spoof that helped tie up a lot of the story in time for Nora and Ray to finally tie the knot. Sadly, the blessed event ended with an unexpected twist: After urging Ray to do right by his new bride and leave the Waverider so she could focus on her Fairy Godmothering on Earth, Damien swiped the gang’s Hell Sword and offed himself before having to face an angry Astra again.

Since we know that next week will see the happy couple ending their run on the show, is this the end of Legends‘ Dahrk age? Here, the sweetly frank Ford discusses what Damien’s death meant to her, how it was to work with McDonough again, and what we can expect from Ray and Nora’s final episode.

So this is a big, fun episode for you.

Courtney Ford: Yeah. How did you feel when you were watching it? I thought it was really sweet and appreciated that the dad-daughter stuff avoided the usual tact of Damien being the just a villain for everybody. We still saw that this girl loves her dad.

And she does. Parent-child relationships are complicated. They’re complicated and I feel like you could really see that [in the episode]. I was surprised when I saw the previews that they were revealing already that it was Damien Darhk who was coming to dinner. I thought it was going to be a big surprise. Maybe because when I was on Dexter, I opened up the door and was like, “Dad?” This is the second time I’ve been doing that! [Laughs].

How was it working with Neal again?

Oh my God, I love him. Anytime I get a chance to work with Neal, I’m just so happy and so excited. He’s an excellent scene partner. He’s just an incredible actor and the energy in the scene when he is around is always crackling with electricity. I’ve been lucky enough to have some of the greatest TV-villain dads of all time, you know? On Dexter, I had the Trinity Killer [played by] John Lithgow. And then Revenge, it was Malcolm Black [played by] Tommy Flanagan, even though my character died before they were in a scene together. But Damien Darhk and Neal McDonough? He holds a special place in my heart.

What did you think of what he does at the end of this episode?

Oh God. Do I have to tell? So the fact that I knew what he does, that made me sad. But Nora doesn’t know, so there was this weird actor-compartmentalization I had to do.

Because you’re playing all the scenes leading up to it like this Daddy is back and trying to be better.

Right, and it breaks my heart that she thinks she’s going to see her dad again. She’s not, so that’s painful. Neal and I have developed a strong connection over the years, and Nora and Damien have their strong, very complicated connection. Also, Neal in real life is a father and he has daughters. So all of that together, him being a father in real life, it really, really affected him. And even if he hadn’t gotten emotional, I would have. When he gives her that one last look and walks away, I was watching him do that and it broke my heart.

A look at stars like Stephen Amell, Ruby Rose, and Melissa Benoist who've appeared on the big screen before, during, or after CW superhero gigs.

And you still have one more episode. How does Damien’s death affect Nora?

OK, well you know, nobody ever really dies on Legends.

Well that seems pretty severe, though, didn’t it? [Laughs] 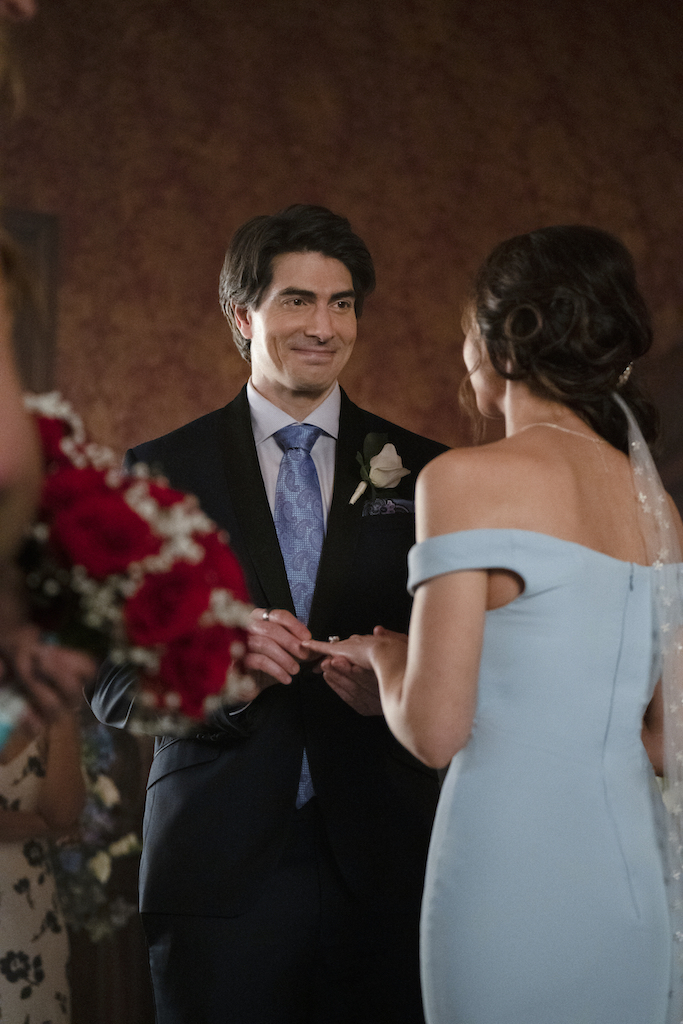 So it’s more of a happy ending for Nora and Ray, with a Darhk-er edge. But at least you got to marry your own husband on air! I’ve read somewhere that you and Brandon have worked together as a couple four times?

Yeah, we have! Right before he left for Australia for Superman Returns, we did a short film together that I produced and sold to iTunes. But the contract has run out so I don’t think you can get it on iTunes anymore. I don’t know where it is now. It’s on a DVD in my house. [Laughs] And then we did an independent film, which was called Lie to Me and then they changed it to Fling because there was a show that was called Lie to Me. And then we did another independent film called Missing William. Of those, I think Fling is the best. And then Legends is four… did we ever act together in a TV show before? Another TV show? I can’t remember.

Clearly you have it down to a science. Because when they first introduced you, nobody would have guessed these two would ever end up together.

No — and we want that! We didn’t want people to think “Well, they’re together now.” On TV, when people get together, that’s not always the greatest. So that was the origin, just trying to keep parts where Nora would kind of slap Ray’s hands away. In the scripts, it would say things like, “The window explodes and she falls into that into Ray’s chest. They give each other a look… sparks,” and I was like, “No!” I would like bat his hands away in the shot to keep that tension because we wanted to extend that as long as possible. By the “Berlin” episode in Season 3, I had already fallen in love with Nora and thought, “Oh no, now I love this character and now I want to stay,” because originally, I was only contracted for three episodes. I’m pretty positive I was supposed to die because that was going to propel Damien Dahrk’s arc and then they changed their mind.

And now you get to leave together. How was it for you filming the last episode with Brandon?

We soaked up every minute and enjoyed spending time with our friend-family, our cast and crew in Vancouver. Tala [Ashe] and Jes [Macallan] threw us a bit of a going-away party and that was really sweet. We put our hearts and souls into these characters, so of course there were some tears that bubbled up during scenes where maybe a bright smile was required, but we’re professionals and made it work on the next take. We compartmentalized a bit. I think we both had a tough time during the final scene… we had to [shoot] that one a couple times. No one ever knows what the future holds, but we choose to be positive and treat life like an adventure, so on the final take, I turned my head and looked at Brandon. I held up my hand and he grabbed it. We shared a look that meant more than words could say, and we walked forward. That’s the take they used.