The 2020 Oscars were filled with buzzy moments both good and bad. From hilarious reactions to surprise performances, the evening was anything but short on entertainment.

We’re breaking down the evening’s must-see moments — whether you saw them or not. Check out Laura Dern’s sweet shoutout to her famous parents, Bridesmaids and Something’s Gotta Give cast reunions, and everything in between — there was something for everyone at this year’s Academy Awards!

Scroll down for all of the fun, and let us know your favorite moments in the comments below. 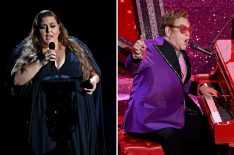 Shia LaBeouf and Zach Gottsagen are just so damn cute. If you haven’t seen Peanut Butter Falcon. You must. #oscars pic.twitter.com/6c9lwMaeM8 Everything from Netflix's first-ever win to the first non-English language film to win Best Picture. See your favorite stars — including a 'Friends' reunion! — backstage and at after parties for the Academy Awards.

Chrissy Metz Shouts Out Her Mom And here’s Tom Hanks paying tribute to Kirk Douglas: “I am Spartacus” pic.twitter.com/eu8rFuHjDC

Bong Joon-Ho Is Very Excited About His Win The rapper, who previously won an award for his film '8 Mile,' returned to perform 'Lose Yourself.'

Martin Scorsese is sleeping at the god damn freakin Oscars!😂pic.twitter.com/3FTLNQMOrM

Parasite Gets Its Moment in the Spotlight

I don’t really believe in God but… God bless Tom Hanks for leading the charge to keep the lights on so that Bong Joon-Ho and the #Parasite crew could finish speaking and fully enjoy their victory. #Oscarspic.twitter.com/hawx8PKMcL