7 of Kirk Douglas’ Best TV Moments Through the Years (VIDEO)

As fans remember legendary actor Kirk Douglas, who died February 5 at the age of 103, we can’t help but reflect on his TV roles, appearances and moments.

Through the years, the star has graced the small screen in TV specials, films, and miniseries and shown up at awards ceremonies as both recipient and presenter. Below, we’re rounding up six of Douglas’ noteworthy TV connections through the decades. 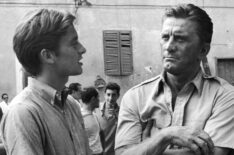 Where to Watch the Best of Kirk Douglas on TV & Streaming

Douglas shocked viewers and audience members alike when he appeared alongside daughter-in-law Catherine Zeta-Jones onstage at the awards ceremony. Despite his difficulty in speech (partially attributed to damage incurred in 1996), the actor received thunderous applause and a standing ovation.

In 1996, Douglas voiced the character Chester J. Lampwick in the episode titled “The Day the Violence Died.” Chester is known as the creator of Itchy, the fictional cartoon mouse from the show’s Itchy & Scratchy.

Despite being nominated three separate times for Academy Awards, Douglas never won, but he did earn a special Honorary Oscar which he received and accepted in 1996. His speech honored his family and longtime wife Anne Buydens. This 1976 miniseries — which starred Douglas alongside actors like Christopher Plummer and Joan Collins — aired four episodes. The title was based on Arthur Hailey’s book by the same name.

In this 1985 TV movie, Douglas earned nominations at the Golden Globes and Emmys for his role as Amos Lasher, a man who suffers injuries in an accident that leave him in an abusive nursing home setting. Elizabeth Montgomery costarred alongside Douglas as nurse Daisy Daws.

In 1982, Douglas played a Holocaust survivor in this film which reunites him with a long lost love. The actor’s son, Eric Douglas, portrayed the younger version of his character Joe Rabin. Honoring his son Michael, Kirk Douglas presented at AFI’s Lifetime Achievement Award: A Tribute to Michael Douglas. Much to the crowd’s delight, he managed to get in plenty of great jokes, including one about how he was too young to have a son receiving a lifetime achievement award.